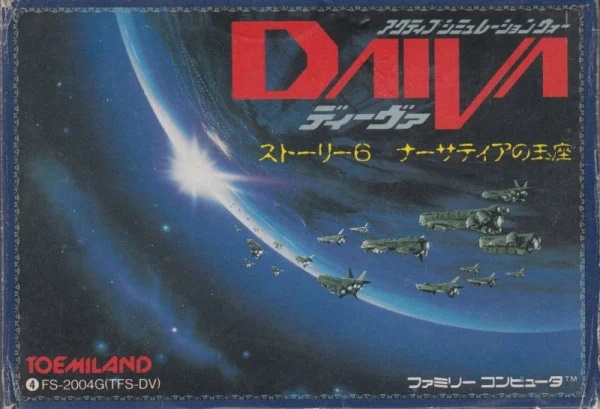 It’s time for a very old school sci-fi shooter. Nintendo didn’t bother translating this one so you definitely won’t be able to get much out of the story but once I was able to figure out the gameplay then I had some fun with this one. It’s definitely not the kind of game that you’re just going to breeze through but with the power of access points and rewinding, there isn’t any game that can take you out forever! I think this one tries a little too hard to be different by adding a bunch of mechanics that don’t actually enhance the game but in the end I’d say that it’s still fun enough.

So, while I don’t know the plot, the goal of the game is to take over 14 planets. Enemies will be trying to take them over as well. The format of the game has 3 main phases. The first is that you start on the overworld and you fly to the planet that you want to conquer. You have to slow down so that you can enter the planet. Planets that you’ve taken over are in blue while enemy planets are in orange. Watch out because they can retake planets that you’ve won so you have to move quickly or else you have to beat a planet twice.

If you do have to fight them directly for a planet, then you enter a turn based ship battle where you both fire off your weapons. This one felt the most random but I only got to play this style once so I probably have to master it some more. I made sure to keep attacking quickly so that I wouldn’t have to play the worlds twice. Finally you get to the heart of the gameplay which is the 2D shooter part. So for this part you control a mech suit as you go through an auto scroll level with a big boss at the end. Before going in, you get to place 3 items on the board. 1 is a full health recharge, one is a rocket, and one is a bomb. You decide how deep into the level they appear.

For example, I set my health refill to appear around 80% through the level so that I could arrive to the boss with almost full health. Strategize and then set your items up accordingly to where you want to have them at the ready. The levels are quite tough though as you get endless bullets and laser blasts being fired at you. It’s hard to see how people did it back in the day, especially with no save feature. You may think there are only 14 levels in the game but that feels like a lot when you are on the back foot the whole time.

The controls are simple as you can only jump and shoot. That’s it but that also means that every movement has to be completely precise or you will be in trouble. Touch the bullets too often and that will be it for you. Then for the boss fights it’s especially tough as you have 6 different weapons being fired at you. The trick is to quickly focus on one and knock it out so there are less things to dodge. You win once you have beaten them all but it won’t be easy.

The graphics have held up rather well for this title. It could definitely pass for being an SNES title if you ask me. This game may not be super well known but it’s clear that a lot of effort was put into it. The soundtrack is also fairly decent. It’s calm enough to suit the gameplay style well enough. In terms of replay value there isn’t a lot for this game. It’s one of those titles where when you beat it, it freezes on the credit screen. So once you have beaten the game, there isn’t anything else to do. That’s just the end of the journey for you.

Overall, This is a game I’ve never heard of before so I’m glad that it made it to the online service. Part of the fun here is playing out a lot of games that I never would have gotten to try normally so that’s pretty cool. I would definitely recommend checking this one out if you have a few minutes. No need to play through the whole game but this way you can get a nice feel for it and just have some fun that way. Until you get the hang of it the game won’t be that much fun but once you enter the 2D levels then you can see the real appeal of the game. It just takes some trial and error.