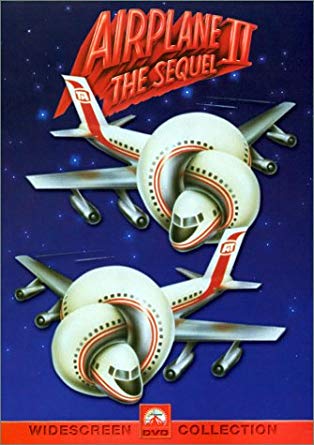 It’s time to look at the second Airplane film. The first one was surprisingly good with how many of the jokes landed. In a way you could argue that by all accounts it shouldn’t have worked. The writing had to be on point to pull it off. Parodies in general are hard to land for that reason because if the writers aren’t excellent then it’ll fall to pieces. Unfortunately Airplane II is a pretty steep drop and effectively plays out a bit like how the first one could have been if it wasn’t firing on all cylinders. Airplane II is content to reuse all of the jokes from the first film and never finds its own identity.

After the events of the first film, Ted has been taken to an asylum for the insane. He manages to break out though and sneaks aboard another airplane that is heading to the Moon. Most of the same crew from the first airplane are back so somehow they all weren’t arrested for what happened. Ted is determined to finally get back with Elaine, but she doesn’t think it is meant to be. With everyone going crazy on the airplane, can anyone survive this time? One thing’s for sure, they won’t forget this experience!

Right away you’ll notice how the film is a carbon copy of the first. Not only do they reuse almost all of the gags, but they even have them all appear in the same order. Most of the events are just like the first film including the plot. This may be part of the parody elements that they are using for the film but it really doesn’t work. What made the first film a success was its risque humor that attacked everything but as a result managed to not be taking itself too seriously. It had the potential to be problematic and naturally not all of the jokes landed, but it was pretty reasonable. The film was funny and miraculously managed to be a success. This one isn’t nearly as funny because we’ve seen it all already.

If you already know all of the punchlines to the jokes, then the build up will naturally not be anywhere near as effective. That’s the problem that this film has throughout its entire run. There are a handful of decent moments like the Hal 9000 parody and I did like the court case for Ted. Those are the only unique parts of the film and they were good so I feel like the movie would have done a lot better if it had focused on being a sequel. Honestly I wouldn’t have minded if the whole film was in the court room. A change in scenery probably would have been good. We also lose some pretty decent characters like the air pilot who stepped in when everyone else was panicking.

An underused character is definitely Ted’s rival. The guy barely gets to appear or really do anything to be honest. It could have been interesting to have a contrast to Ted. A character who was actually pretty competent and tough or something like that. After all, Ted had a lot of potential here. I don’t think it’s a coincidence that most of his scenes are the entertaining ones. He’s a very exaggerated character who isn’t very smart which makes for a pretty fun dynamic. Again, I refer you to the court scenes. So seeing him compete with this guy could have been very entertaining to be honest.

Again, it’s not that the film was a complete bore or anything. The jokes that were good in the first film are still pretty decent just played out. Some gags are still fun like the weapons getting through the scanner and the people dying after listening to Ted. Then others that were already painful like the pilot’s gimmick didn’t get any better. They say that lightning doesn’t strike twice and this is the perfect example of that in film.

I feel like this review is going in circles so time to start wrapping things up. I will say that the Star Wars homage at the beginning was pretty clever. It does end in a pretty iffy way which sort of set the tone for the rest of the film but the actual idea itself wasn’t half bad. The graphics aren’t half bad when they show up but for the most part are complete non factors. This isn’t the kind of film with a whole lot of effects after all. Just the few space visuals is what you can expect to get.

Overall, Airplane II isn’t a good follow up to the first film. I think it probably would have been a lot better if I hadn’t seen the first film. If you see the two out of order then there’s a chance it would work better, but then of course it would be at the expense of the first film and I’m not sure if you really want to do that. It’s why complete word for word remakes typically aren’t done anymore. If you’re gonna experience the same story then you want a bunch of new wrinkles in the mix. This one just doesn’t add enough of them and ends up failing. It can still be decently entertaining of course, but it’s nowhere near the level of quality that the first film had.