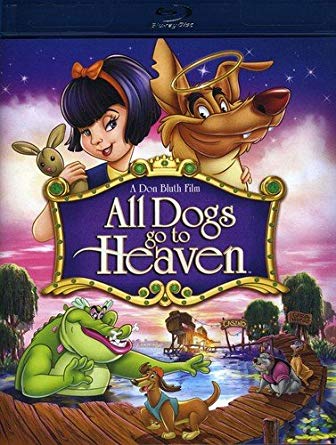 I definitely know this film pretty well from the title, but certainly not the movie. Now I could finally really experience this classic. It’s definitely a pretty fun film although without the ability to come back from Heaven it would be a pretty grim tale for these dogs. Who knew that even dogs have to deal with gang violence and all of these villains trying to mess with the system. This is definitely a quality film that I’d recommend.

The movie starts with Charlie and Itchy escaping from the Pound. This place means business as there are armed guards and a bunch of sirens. The heroes manage to just barely evade this rain of bullets, but their survival is very short lived as Carface shows up and murders Charlie. Charlie never did trust this guy. Well, now that Charlie is in heaven it would seem like his dreams of money are over, but he’s actually got one more chance. See, you can sneak out of Heaven and that’s exactly what Charlie does. He’s now safe from dying as long as he holds onto his watch. He then meets a little girl named Anne-Marie who has the ability to speak to animals. Charlie senses that some money can be made this way so he tricks her into a team up. She’ll get him rich and in exchange Charlie vows to find her parents. The scheme is working well, but can he keep it up or will she eventually see through him?

From that plot you can basically imagine how the rest of the film will go down. Eventually Charlie’s conscience starts to catch up with him and he also realizes that he thinks of Anne as a friend. By then it’s a little hard for him to make a comeback but it’s never too late to help a friend right? The film definitely has its share of emotional moments contained within. It goes for a balance of humor and emotion which I think works out pretty well. This is due in no small part to the fact that the writing is on point here. The character cast is strong and the plot is pretty nice.

As I mentioned earlier, the movie can also get surprisingly intense which is also handled well. One such scene is when the villains do a drive by and start shooting Charlie. If not for his lucky watch that would have been game over. These villains are clearly not messing around and that is actually pretty rare in these films. Usually they are content to just make threats from the sidelines and hide a lot. That’s definitely not how Carface and his team operate. It’s definitely one of those cases where the minions really only serve him out of fear though. Carface makes it obvious that he’ll take them all down when the time is right. He comes very close to sacrificing his general after all.

Charlie’s a solid lead even if he is pretty antagonistic for a while. I also think that he didn’t plan things too well as it should be obvious that Carface would come after him again once Charlie had amassed a lot of money. Why wouldn’t he make a second attempt at the lead’s life? Meanwhile, Itchy is a good second in command. He’s a loyal partner to the end. You can understand his frustration near the climax as well since it looks like he was beaten up quite a lot while Charlie was having fun singing songs. I feel like Charlie may have even forgotten about him completely a some points.

Anne is a nice enough kid even if she is a little on the gullible side. I’m still not a big fan of kids taking center stage in these things, but she could have been a lot worse. I’d prefer it if she didn’t take the whole thing so personally, but again, that is asking an awful lot out of the kid. At least she is trying to make Charlie a better person so that’s always good. Then you’ve got King Gator who is definitely a powerful ally to have. He doesn’t get a lot of scenes, but the ones that he does get are pretty critical. He’s not really my kind of character either, but he gets the job done.

I enjoyed the animation here. It’s definitely pretty sharp and the character designs are on point. It works well for the action scenes and the quick speed of the animations helps it keep up with the pace of the film. We also get some songs here. They aren’t quite on the level of Disney, but they’re catchy. Charlie probably got one of the better songs when he was getting the kids to share their pizza. I don’t blame the pups for being skeptical though, how do you share a single slice of pizza? That’s not going to be enough to fill anyone up.

Overall, All Dogs Go To Heaven is a pretty fun film and I’d definitely recommend it. This feels like a complete movie as it really has everything you’d need in a feature like this. It’s got danger, comedy, and suspense. The writing is good and there are no sections of the film that really drag on. It can be annoying to see Anne falling for all the tricks since you know she’s going to take it hard later on, but even if you know the story beats that are coming up the film doesn’t overplay them. There’s just nothing to really dislike about this movie and the replay value is pretty good. It’s the kind of film you could see a second time and still have a similar experience. I wonder if the sequels will end up being as good.