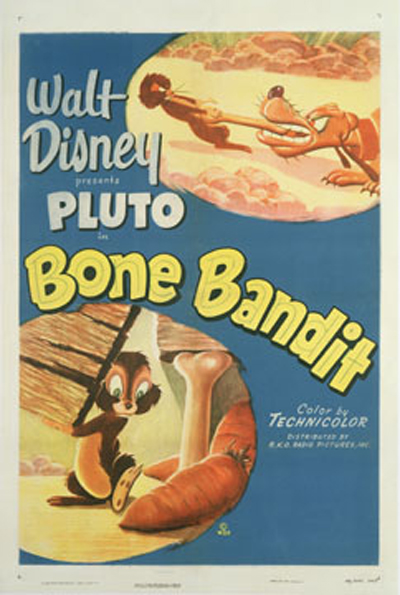 It’s time for one of those really quick Disney shorts. In this one Pluto gets to take center stage as he has to protect his bones from a local gopher who is trying to steal them. Right away I think it’s safe to say that you will be on team Pluto. It is his bones after all so I don’t think there is really a debate on if they belong to him or not. Furthermore, I would argue that Pluto wasn’t even picking the fight. Most of the time it was just the little animal being naughty.

The ending is very important for a special like this because if Pluto were to lose then that just wouldn’t be satisfying ending. A good deal of the special also deals with these flowers that are on the field which Pluto is allergic to. This is meant to balance the fight a bit as otherwise Pluto could just step on the little guy and be done with it. Fortunately Pluto is able to adapt to the situation pretty quick so he’s always ready for what is about to happen next.

It’s a decent special, but definitely on the weaker side of things. It’s mainly just a slapstick fight between the two of them, but Pluto can’t hold his own special nearly as well as Mickey or Donald in that regard. Since Pluto can’t talk we don’t really get to see his reactions to what’s happening. He’s also a lot more innocent than the other characters so you’ll probably just feel bad for him. It’s a very old special so it’s not very mean spirited or anything like that, but at the same time you wouldn’t say that it’s all that fun either. It’s a short special that will just come and go without too much thinking on it.

As I mentioned the ending is definitely what helps it stay afloat since Pluto got to defend his turf. He also had a pretty good feat with the sneeze and the whole neighborhood blowing up at the end was pretty unexpected. I wonder if the little guy will ever appear again. On the wiki he is just referred to as a Gopher so the fact that he doesn’t have an actual name seems to hint that he never got to be a big character. I suppose they can’t all grow to be household names though.

The animation is definitely pretty good. I do miss the smooth hand drawn nature of these specials back before everything started going into CGI land. What’s wrong with a nice hand drawn adventure right? You can feel the care that goes into all of the scenes and the visuals also just age extremely well. You wouldn’t think that it’s been many decades since this short aired because it is animation that could hold its own against a lot of the modern cartoons. Some styles just age better than others and this is definitely one of them.

Overall, Bone Bandit is a cautionary tale to us all that you always have to look after your stuff. Watch out because there are burglars everywhere and taking them down is very difficult. Pluto protected his grounds though and showed us why Mickey trusts him with the house. I’d be down for a new Mickey Mouse film with Pluto showing up. I still don’t think Pluto is ready for his own movie, but as a supporting character he can definitely help make the experience more fun. If you haven’t seen this special yet then you should check it out since it’s so short. A shortened version of it is up on Youtube, but it seems to be heavily edited since it is even shorter than the version I saw. I’m not sure if that’s the way to go, but I suppose it should be pretty similar.