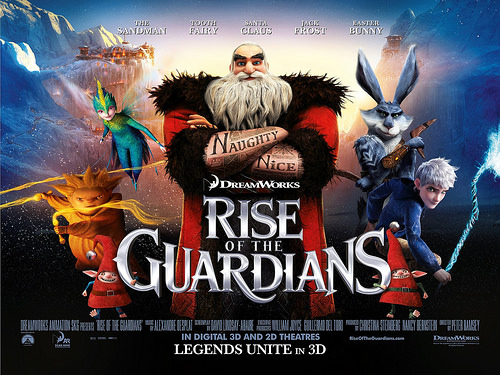 Rise of the Guardians is a film that looked like a lot of fun right from the first trailer that I saw of it. The movie looked like it would have a surprising amount of action in it and the idea of a Holiday Mascot crossover had a lot of potential behind it as well. The film turned out to be about as good as I had hoped and it’s definitely got some nice visuals for the action scenes. I can safely say that it is rather underrated considering how obscure it appears to be, at least relative to other big animated films.

The plot starts off with a lonely guy named Jack Frost. He has ice powers but nobody actually knows him. Guys like Santa Claus and the Easter Bunny have a lot of fans but not poor Jack. Despite trying to help people out and enjoy himself in the process, people just can’t see him and as such it all goes for naught. 300 years pass by and nothing changes. However, a mysterious villain has arisen and is determined to destroy all of the iconic holiday legends. Santa Claus and his team of icons realize that this is one battle that they cannot win. Their leader tells them to enlist the help of Jack Frost. Can this team really be enough to take down this villain or is the battle over before it has even begun?

As I mentioned earlier, the battle scenes are handled really well. The energy effects are vibrant and you can feel the power behind Jack’s blows. The rest of the graphics are fairly standard but solid nonetheless. The character models look good and the screen is always clear. If this was more of an action movie then the film would probably be able to prove itself even more. There isn’t much of a soundtrack so that is regrettable but still, having one of the two big technical components to the film at the ready is a good way to start off.

One slight issue with the film, or at least a concern for when the fight scenes would occur is that Jack appears to be the only power hitter on the team. The rest of the combatants just pale in comparison and they don’t seem to have any really useful special abilities. Jack has complete control over the ice and can fire blasts so concentrated that the they are basically lightning strikes. He is really the only one who puts up a decent fight against the villain while the others are basically just watching. At the very least you would expect Santa to be really powerful but surprisingly this was not the case.

Santa is a twin blades user who strikes with pure power. The problem is that he isn’t very fast nor does he seem to be very smart. He’s a nice enough chap and makes sense as the leader of the team but making him a little stronger would have definitely been a good move for the film if you ask me. They still could have had some reason as to why he couldn’t hear the main villain without simply making him weak.

The Easter Bunny is also weak but he’s not nearly as likable as Santa. He talks a good game but just can’t compete when the chips are down. You can tell what his character is after a single scene with him. The trope of acting super tough when you’re actually weak can make for really good characters but typically the film or show has to at least be a little self aware that the character is all bark and no bite. This one never really gets into that. He still isn’t the worst character though or even the 2ns worst. He can still be somewhat reasonable.

The 2nd worst character is definitely the Tooth Fairy. She can’t fight at all and is a little too obsessed with her teeth gimmick. It wouldn’t even be a problem if there was more to her character but there really isn’t. Her role in the film is so small that you could take her out entirely and I doubt a whole lot would change. The worst member of the team is the Sand Man. He’s one of the most annoying kinds of characters as he is always sleeping but actually ends up being the strongest kind of all. He didn’t have to work to get his strength but in fact he was just born into it. He has a lot of arrogance when fighting but not the cool kind as you’re still just annoyed at the guy. It gets to the point where you already dislike him so much that his potentially good moments don’t even work. As you can tell, I did not like this character and giving him the pivotal moment at the end of the film wasn’t a great move if you ask me. Why couldn’t Jack have gotten the big blow and ended his character arc on a grand note? If you ask me, that would have been perfect.

The villain is pretty solid. His plan to take down everyone who believes in the legend is pretty solid as then they will be too weak to put up much of a resistance. He should have picked them off way before that though instead of focusing on the main goal even when there was just one kid left. At that point you just have to pick off the main characters one by one. In his defense, Jack’s plan was pretty good though and it’s easy to make the kids believe when you actually move stuff around right in front of them and use your supernatural abilities in an obvious manner. The villain made for good fight scenes so I’d definitely say that he did a good job fulfilling the role.

I’ll also give the film kudos for not giving the kids much of a role. Lets face it, they would have had some cheesy scenes and I’m not sure I can buy into the kids as solid characters just yet. Still, since they were crucial to the villain’s plan they needed some screen time. The way the film handled it was pretty solid so that’s another feather in its cap. The writing in general was pretty solid and while the cast of characters may not have been amazing, Jack was likable which is really what counts. He’s a solid lead and I’d be up for a sequel.

Overall Rise of the Guardians is a solid animated film with a good amount of action and heart. It’s a film that I would definitely recommend checking out. Where else are you going to see a film where Jack Frost finally gets to shine and prove himself as one of the big Christmas characters? He really doesn’t get a whole lot of attention compared to the other big characters in most media so this may be the only time to really see him take the starring role. Maybe it’s time I get the game adaption of this movie to see if it holds up well. Getting it for Christmas would have been fitting but that day is already booked with presents so most likely it would be later on if I purchase it.