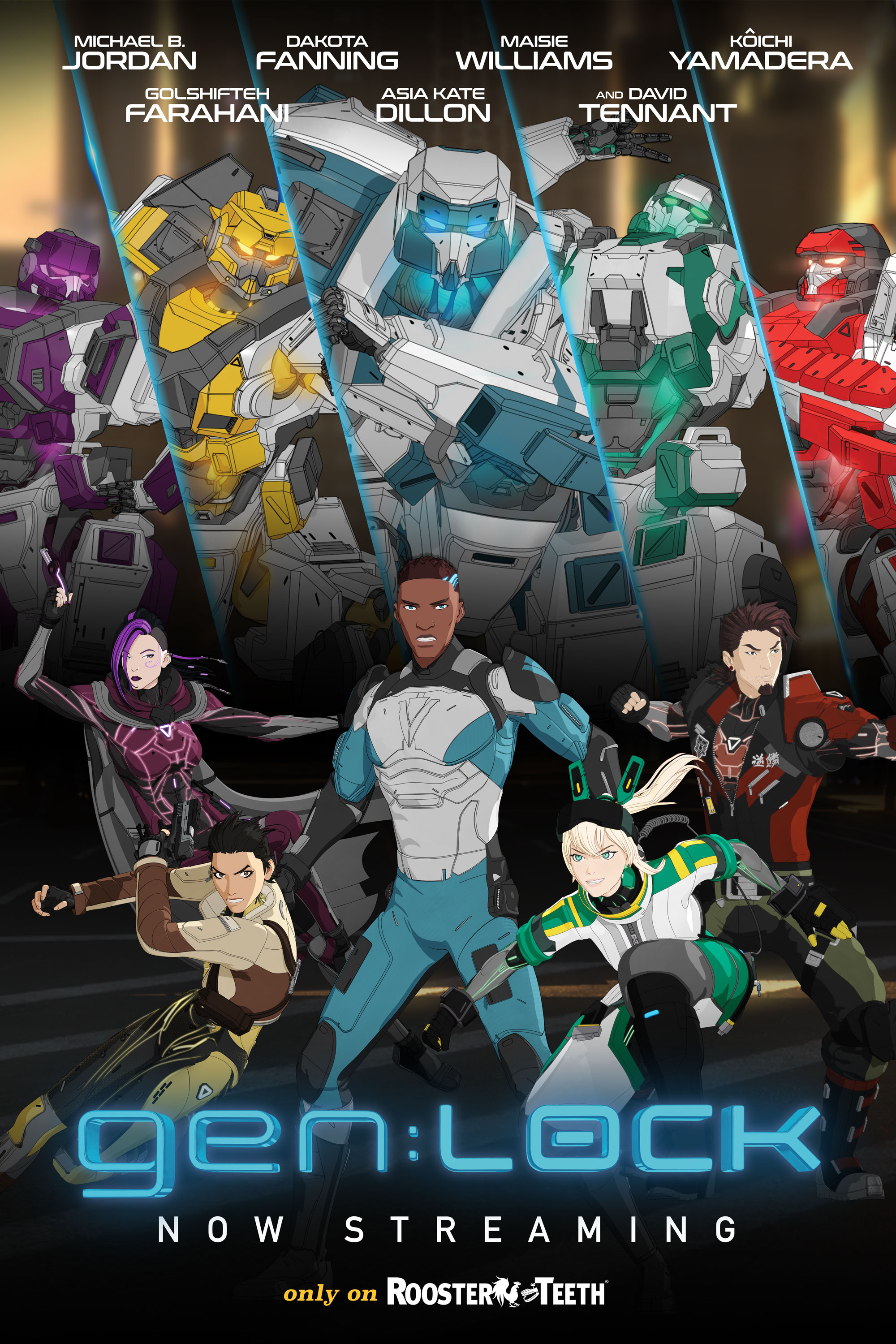 It’s time to take a look at one of Rooster Teeth’s latest shows. This one was getting quite a lot of promotion from the company since they were hoping it would be the next big thing. Some even believe that they took part of RWBY’s budget away to this show temporarily although I’m not sure if it was ever confirmed. This definitely isn’t the next RWBY, but few things are. It’s a solid show and I’d be game for a season 2. The company definitely does need to remember that RWBY is their starter show and this is the back-up though.

The world has been embroiled in a battle with a foe who uses virus type weapons which have enabled them to take control of a majority of the planet. Their spores destroy whatever they touch and so they are hard to fight again. Fortunately Dr. Rufus has come up with a new project to fight them. It is called Gen:Lock and it allows a pilot to merge his mind with a robot suit. This does provide a good amount of defense but only a few robots have been created. Will these be enough to turn the tide of war?

It’s a pretty good set-up here. Who doesn’t like the classic resistance vs empire storyline right? It’s always nice to see a futuristic world as the setting as well. We don’t learn a whole lot about the enemy of the current state of the world beyond this, but we don’t really need to learn more. The core concept is the focus and I’m thinking the world will be fleshed out more in future seasons. We do have an online world where people go to forget about their real world issues which makes sense. You always want to have something like that in a dystopian future.

Julian is the main character here and he was presumed dead early on before returning as the first Gen:Lock candidate. This causes a lot of drama between him and Miranda. I’m on team Miranda here at least in the argument that if he wanted to he certainly could have gone to meet her sooner. At the very least that would have been nice to give her confirmation that he was still alive. So, she ended up meeting someone else and rebounded after Julian was gone. Now he wants to come back together, but it just feels way too late. That whole romance is a bit iffy and I think Miranda should just stay with her second pick at this point. Going back and forth just wouldn’t be a good look for either of them. Right now Julian is the one trying to convince her so the blame is on him. Hopefully Miranda is able to stay strong.

Otherwise Julian is reasonable as the main character. He’s quick to jump into the action, which is always good. What isn’t good is that part of the time he’s just jumping in and not even totally hoping he’ll win. He just wants to end things with Nemesis and at times it feels like he’s just trying to throw his life away. Hopefully now that he has finally accepted the mind meld he’ll be more ready for season 2, but letting Nemesis get that last hit in was definitely a pretty big mistake on his part.

Nemesis is a solid villain for sure. He’s a solid threat and is able to basically take on the whole team on his own. The guy leaves an impact and his monster design was really solid. He reminded me of an early Accel World villain with his tendrils supporting the claw attacks. The guy definitely has a pretty rough sob story so you will feel bad for him to an extent. The show handled his twist pretty well since usually when there are clones and such running around it always ends a certain way. This one flipped things and so long as they don’t reverse this in the next season it was a really smart decision.

Then we have Robert who is easily my favorite character in the series. Technically speaking he isn’t the real Robert, but an imposter sent to get details on the heroes. The guy only appears for an episode, but man is he impressive. The guy outfights just about everyone in what is one of the best fight scenes in the series and would have escaped if not for making a terrible decision at the end. He may never become a very well known character because of his limited screen time, but he was good. When you’re a double agent confidence is key and this guy had that in spades.

Miranda is a decent heroine, but I do think she’s in a tricky spot in the show simply because she doesn’t have a robot. That means that she really can’t keep up with the others and the gap will only continue to grow. Any supporting character in an action show who can’t fight will usually just be in the way by the end so hopefully she can get a robot of her own. Right now she’s mainly here for the drama with Julian so I’m ready for that plot to wrap up.

Cammie is one of the Gen Lock pilots and definitely the most optimistic of the bunch. Unlike the others she actually tries to have fun the whole time and while she may not be as disciplined as the others she is a quick learner. Cammie definitely gives the group a lot of personality and is one of the better members of the team. Her robot is also very mobile so I’d say that in these group battles she is one of the most useful members. Then we have Kazu who mainly doesn’t speak English so most of his lines are subbed. He’s an okay character, but there was one scene that really hurt him for me. Towards the end of the series all of the characters are fighting and Kazu is getting wrecked by Nemesis. Kazu is a swordsman and his robot has a sword so you’d think he would use it right? No, he doesn’t use it at all until the others mind meld with him and remind him to use it. Then he swings it….but really? Using a sword should have been the very first thought he had.

Yasamin is a character who definitely has a lot going on in her backstory but we haven’t really gotten to learn a whole lot about her just yet. I fully expect that to change in the next season. Her character is already really solid and depending on how this goes she could rise up to be the best hero. She can fight and has a lot of street experience. Her robot is solid but since she isn’t having to rely on it this makes her a much more versatile fighter. Then we have Valentina who is the most jaded member of the group. I’m expecting her to betray everyone at least once before she fully joins the allies. Valentina definitely doesn’t mind riling up the rest of the group.

Then you have Rufus who is the professor type character in the series. He seems reasonable all things considered, but is a bit of a boring character. He’s not someone you really need to return because the series just does’t need him. It’s also a bold move to sideline him straight away. In general Gen:Lock has made some pretty bold decisions, but have walked back on a few of them. It’s a shame because the series was building a pretty good atmosphere of how serious this threat was to the heroes. Hopefully they don’t walk back too many moves.

I also have to say that the resistance leadership isn’t very smart. With the Gen:Lock robots they should really be pressing their advantage as soon as possible. There is a time limit to consider, but the longer the wait the more chance that the enemies will gather more mechs of their own. Right now with a group of robots I’m sure the rebellion could re-conquer a bunch of territories all at once. If they do that then this war will seem a lot more winnable. At the moment the enemies still have the advantage since they can erase cities in an instant with their chemical weapons so ultimately the heroes are going to need better protections against that.

The animation is okay. It’s not really my style, it sort of looks like Tron or Beware the Batman. It’s not as smooth as the former but a little smoother than the latter. I’m not sure if it’s a similar engine as RWBY, but the latter looks way better so maybe it’s a colors thing. The action scenes can be good though and that’s probably where the show is at its best. Also, with hos high the animation standards can get nowadays, having below average animation doesn’t equate to being bad. It’s still good enough to watch the show and not have any real issues. It could also look worse as at least the show is going for a traditional look. I think what the show needs to do is just make things look a little more vibrant. More color in the backgrounds would make a world of difference. As for the soundtrack, it’s okay. The show is going for more rap type songs as the lyrical tunes which doesn’t work great, but they’re okay. The instrumental battle themes are definitely more solid.

I won’t really get into comparing RWBY and Gen:Lock much since their isn’t much of a comparison but since they’re from the same company you gotta do it at least once. Look, RWBY is the greatest show of all time and excels in every category. There’s no way Gen:Lock could hope to compare in any aspect, but when you’re comparing anything to the greatest of all time that isn’t really even much of a slight. At least I wouldn’t look at it like that. That being said, I really hope Rooster Teeth doesn’t divert any profits or budget from RWBY to Gen:Lock. If RWBY earns more than expected then it should be used to make a movie or increase the amount of episodes. Sharing is caring, but sometimes you gotta keep things separate. 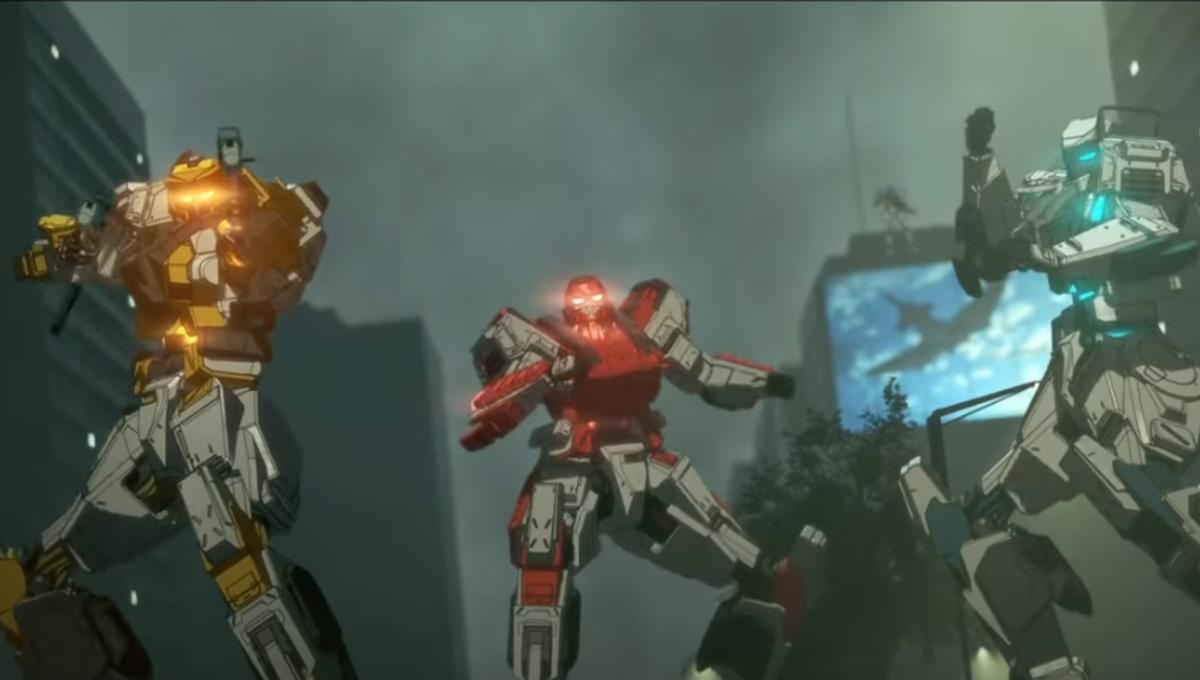 Overall, Gen:Lock is not very long right now as it’s only one season at about half the length of most. Still, it’s off to a good start and I think the series should have a good future. It’ll need to do something to hit the next level like throwing in more good tunes or enhancing the visuals, but either way I look forward to seeing how they handle it. Maybe one day we’ll get a Gen:Lock and RWBY crossover event. That would definitely be pretty fun. If you like mech shows and haven’t seen Gen:Lock yet then you should change that.