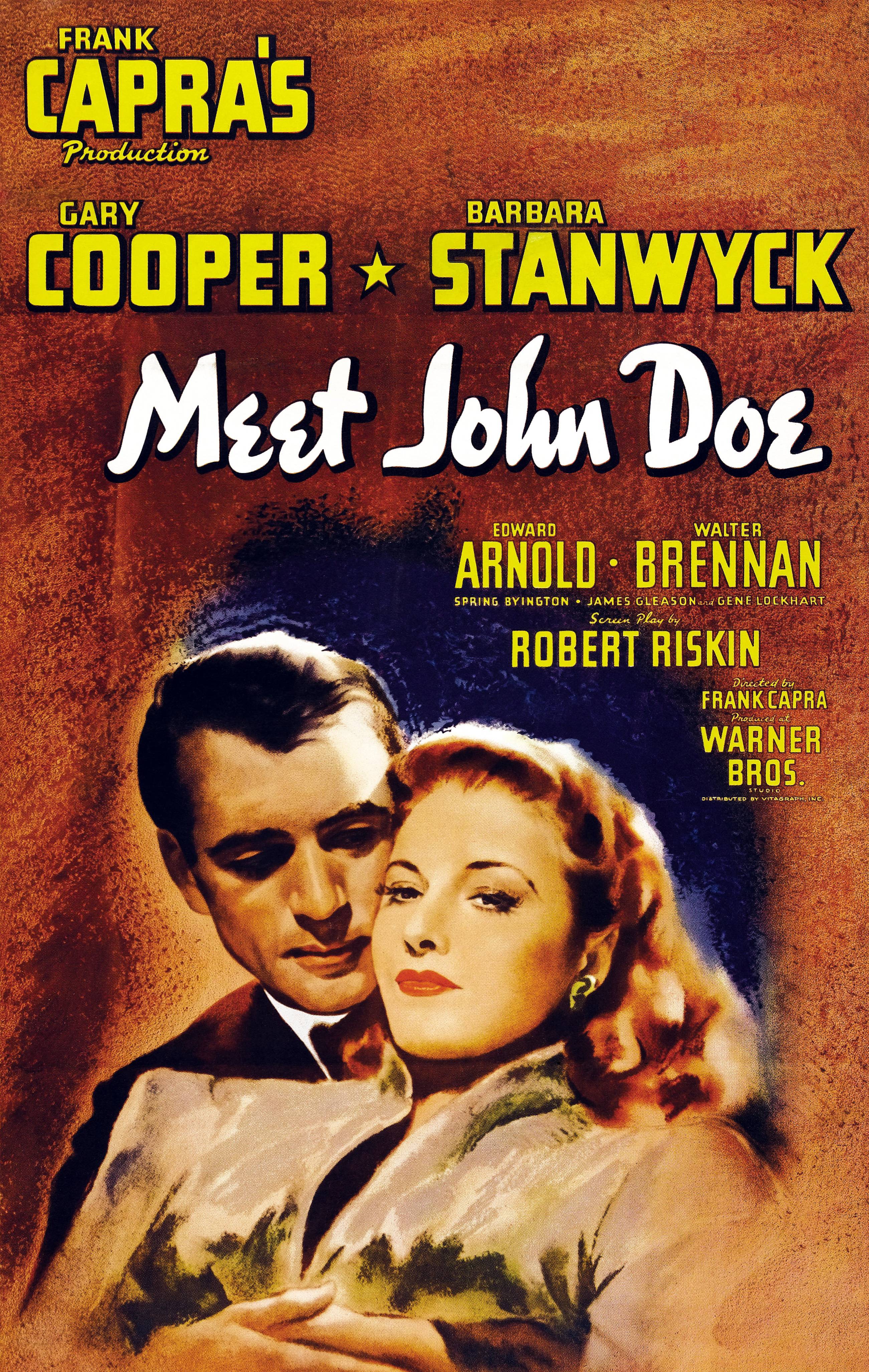 John Doe always seemed like a cool name. I don’t know the origins of how that became such a popular name to use as an alias but it is certainly catchy. The movie does a good job of showing how difficult it can be to uproot the political power around you. You can’t just try to rock the boat without an army or all the sides will get you. “John Doe” wasn’t prepared for this and you’ll have to see if he can adapt or not as the movie goes on.

The movie starts off with a newspaper deciding to fire a ton of its staff as it transitions into greater profit margins than ever before. Ann is upset by this and creates a fake suicide letter by a “John Doe” to stir things up. This plan works as the paper calls her back in and she convinces them to make this into a big story. They’ll take a random guy off the streets and have him play the part. He will say that he is going to jump off the building at Christmas Eve and in the meantime he’ll talk about society’s problems. They’ll then give this guy a train ticket out of town so that he isn’t spotted and the illusion doesn’t break. They find a guy who actually is named John and get him to play the part. John isn’t thrilled about it, but this seems to make a lot of people happy. Is he making a big mistake in sticking around here or will it all work out in the end?

Ann’s move at the beginning was certainly bold but it payed off so big props to her there. It’s sort of something that you would expect Lois Lane to pull off. Throughout the movie Ann has a solid role and really shapes John into the character he is supposed to be. Her mother gives her a lot of good advice too when it comes to making the speeches. By the end of the film one of the themes is that most people will ultimately submit to power and peer pressure though. Unfortunately Ann is no exception and it is far too late by the time she sees the light. She made a rather big mistake during the film which comes back to haunt her. Ann’s good scenes heavily outweigh her bad ones though so in the end she was a quality character.

The character I really liked here was The Colonel though. He spends the whole movie trying to warn John against the dangers of money and letting it make him weak. He’s certainly paranoid and off his rocker though. The Colonel’s points aren’t all necessarily wrong, he just takes them too far like saying how $50 will completely break John. The Colonel is all about freedom and would prefer to live under a bridge than to have a comfy bed and live in the lap of luxury. He is loyal though and no matter how tough he talks the entire time, you can always find him right next to John when trouble comes. The Colonel has also sacrificed quite a lot in order to help John based on what he said about having to push back his travel plans so often.

Henry was another standout character. He’s the editor of the newspaper and while he’s a tough man, he’s also a guy who likes to play fair. He fights for the common man and doesn’t like it when the politicians try to step on everybody. He’s done his best to keep the newspaper objective and towards the end of the film he is the first to suspect that something is not right here. Now, he does drink a lot which is a mistake since it means that he can’t focus on the issue at hand, but aside from that scene he does keep his cool for the most part. I’d say every character makes a mistake at some point or another here so that’s not terrible.

When it comes to John, well he takes a lot of convincing here. Considering that he was homeless and without a place to turn to before now, I kind of thought he would be a little more co-operative. He ditches the characters at a moment’s notice and it’s not until he’s directly confronted by all of the people that he has helped that John really buys into the program. It seems like he wasn’t truly understanding what he was even talking about in the speeches initially. He was only doing this in large part because he likes Anna lot. It’s not the greatest of motivations for a character but at least they are ones that make sense.

By the end of the film John is good but it takes him a long while to get there. He also comes close to making the wrong decision as well. I won’t criticize him for the speech since there was really nothing more he could have done there, but I would have liked him to have tried some different methods to stop corporate after that. He talked a really good game initially but it seems like he just didn’t have a lot of big plans after that.

Finally we have the main villain Norton. His scheme is rather ambitious as he aims to start a third political party which would knock the other two out. You can’t say that he dreams small, that’s for sure. That said, I see a lot of issues ultimately stopping him anyway. Even if John had gone along with his scheme, the movement would have likely died out midway through. Norton would learn the difference between having clubs as a hobby and then turning that into a political army. After all, all of the clubs had a role of no politicians so I don’t think they would all suddenly be tricked into becoming a fully fledged political army.

The movie does show the importance of being careful who your benefactors are. If someone’s paying for your clubs and memberships then that’s giving them a whole lot of power to use against you in the end. Something like that can and usually will end up going sideways. The movie is mainly laidback and relaxed but the ending does get rather intense. The film does a good job of building up the tension and it’s a well written adventure from start to finish. You’ll be feeling the intensity of the movie as well as the somber notes when things start to fall apart for everyone. Ultimately each character tends to act selfishly at times which continues to snowball into a bigger issue.

Overall, I liked this film. It’s a well written movie that is really interesting. The big meeting of the villains at the end was rather hype and almost felt out of place here with how diabolical everyone was. It helped paint a nice picture of the every day joe vs the world though. Some scenes may be a bit cheesy like how the clubs introduction to John felt a bit dragged out but it’s still a heart warming scene to see how they were all affected. As a few members pointed out, the overall message of knowing your neighbor is a sound one even if the movement at large ended up failing. Some members took it way too hard like the guy with a ton of signatures. You can see why they were upset though and perhaps caught in the moment but that’s why in a movement you need to agree with the idea and not the person at large. If you’re up for a classic film about politicians manipulating people behind the scenes, this is a really solid one to check out.