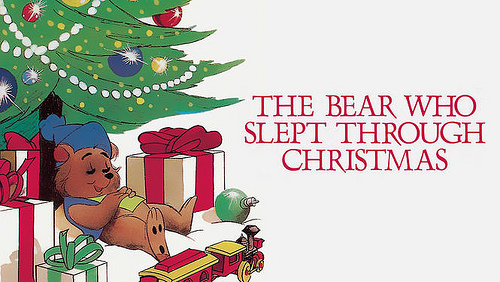 Time for another Christmas special but this one is by a different crew so we’re back to traditional animation. It definitely looks pretty good and right away it’s an improvement for me at least. As for the actual story, that part is a little less engaging but I blame the main character on that one. So prepare yourself as we enter the world of the Bears!

The special starts by showing us how the Bears all work at this large honey factory. They work for most of the year and then take a break to hibernate. It’s a system that has been in place for generations and the Bears have learned to love it. After all, who wouldn’t want to sleep for a few months? That’s what they all thought until Ted showed up. He wants to stay awake for Christmas and has tried to do so for years. The problem is that every time he ends up falling asleep which certainly doesn’t play into his plans. This year he is determined to stay up and even ends up travelling to the Human World to do so. (Well, it’s the same world but they may as well be separate)

I don’t think that Ted’s plan is bad or even that selfish. If he wants to stay up then that’s fine. It won’t hurt anybody and at most he’ll just be really tired once the hibernation is over since he’ll have had less sleep. The problem is that he does end up hurting others which is certainly no good. First he forgets to turn the honey off which is pretty bad since they waste a few gallons and that ends up hurting the company’s bottom line very quick. Fortunately for Ted his boss was very understanding and told him that he could overlook this but not to let it happen again. Then Ted runs outside and does an interview where he tells the world his plans. This isn’t a good look and it reflects poorly on the job. When you’re an employee like Ted you can’t just give interviews without going through HR first.

I’m probably being a bit hard on Ted, but it’s for his own good. If he was a little more careful I think he could have been a very good main character. Most of the special is about Ted finally making it to the human world/Christmas. Once he does make it we realize that this was all part of Santa’s plan from the start. It’s all rather genius from that holiday icon’s perspective. Everyone is just another piece on the chessboard for him. The whole situation can be a little odd if you really think about it as Ted got to the human world pretty easily all things considered but when you throw magic into the equation then things start to make sense. It’s also possible that without Santa Ted would have been doomed from the start.

Overall, The Bear Who Slept Through Christmas is a pretty good special. Ted could be annoying at times but at least he had a goal and saw it through. His determination is admirable for sure and he succeeded in his goal. The ending is pretty nice and a best case scenario for all parties involved. I’m sure even his boss is happy about the whole thing since now his operation can be back on target just as he likes it. I recommend checking this special out. It’ll help remind you to look forward to Christmas since it’s always a blast and a half. You just can’t go wrong on this day.