All right, it’s time for another RWBY list. The series has had a lot of quality action scenes throughout and that’s what has gotten the series so popular in the first place. It’s also pretty well balanced as every volume has been able to deliver a fight worthy of this list. This list isn’t quite as hard to create as picking the best characters but it’s still not easy either. Here are a few quick shoutouts to some of the fights that nearly made the list. The Food fight back in volume 2 was definitely a lot of fun. It was a friendly exhibition between team RWBY and JNPR but both teams really gave it their all and the choreography was on point. We have never gotten to see the 2 teams fight before and at this point it is unlikely that we ever will so this was the closest thing to such a team fight.

Another pair of shoutouts have to go to the 2 train fights that didn’t make it on the list. Blake vs Torchwick and Weiss vs the White Fang lieutenant. While the former fight was quite solid it was short and naturally less impressive than the season 1 fight. The Weiss fight was great and certainly delivered with a lot of quality visuals but it was just edged out by a few more fights. This one would fight with the Vernal fight as a close runner up. I also liked Yang’s battle against the two dancers in her trailer, but the fight was super short. All right, let’s launch into the list!

10. Ruby vs Torchwick and Neo 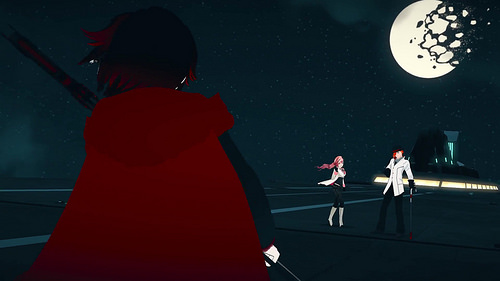 After seeing Neo completely wreck Yang back in season 2 I think it’s safe to say that everyone was looking forward to Neo’s next big fight. Well it finally happened here and as expected she had the upper hand. It is a little hard to say how well Ruby would really do against her since the fight was 1 vs 2, but Neo seemed to have the lead regardless. It’s a really solid fight that shows off the villains teamwork. The intense music in the background serves to amp it up even more. 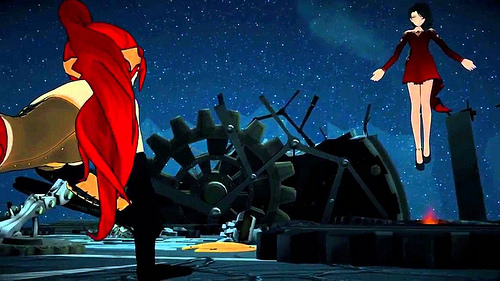 How could the final fight of Season 3 not make it? Pyrrha put up a really good fight considering that Cinder had ascended to be one of the 4 Maidens by this point. Her magnetic abilities are put to good use here and the fight has a lot of shockwave effects to emphasize how much power both of these fighters have. Even once you think Pyrrha is down for the count she manages to get one last hit in. A shame that her opponent was simply on another level. 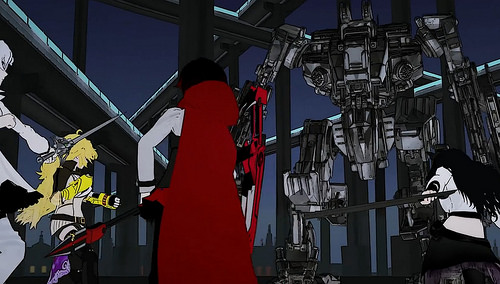 We’ve seen teamwork from the villains so it’s time to look at the reverse. Team RWBY utilizes a flurry of combo moves in this match and it’s nice to see since during the timeskip between seasons 1 and 2 it’s expected that they would have had a lot of time to train. Each member is a lot more experienced now than they were before. We also got Yang’s cool “Die” song along with the best showing of her semblance in the whole series. Torchwick himself doesn’t get to fight much here, but his mech suit was certainly impressive. In general this is still the only real time we’ve gotten to see team RWBY fight a powerful opponent. Hopefully we get to see a fight like that in volume 6.

7. Torchwick vs Blake and Sun 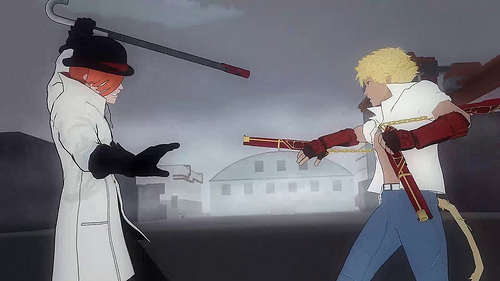 This season 1 climax fight was great. For starters we actually got to see Torchwick fight hand to hand and it proved that he wasn’t simply a thug who hides behind his men. We knew that his cane was good from episode 1, but here he was easily crushing Blake and gave Sun an even fight. I don’t think he would have beaten Sun, but the fact that it is a possibility is certainly impressive. The fight is well choreographed and very fast paced. 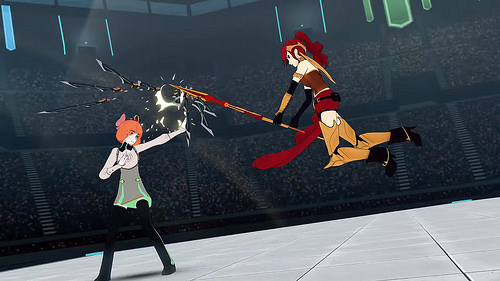 This fight is probably a little underrated since it occurred amidst the plot really starting for the show so you were busy thinking about everything else. Penny’s manipulation with her swords is very similar to Pyrrha’s magnetism and makes for a fun match up. The music for this fight is really good and it’s just very fast. Both opponents are very skilled, but at the end of the day there is never any doubt as to who would emerge victorious.

5. Mercury and Emerald vs Coco and Yatsuhashi 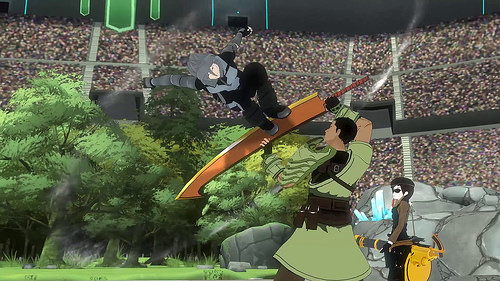 The Tag Team matches in the tournament were definitely a blast. While the Weiss and Yang match didn’t quite make the list it was also pretty solid. This was the first time we got to see Mercury and Emerald fight for real and they lived up to the hype. The fact that they won this round so easily shows what a threat they are and it’s why to this day it’s hard to say whether any tag team of RWBY could hold their own against them. Mercury did most of the work in the opening stages and probably could have won in the 1 v 2, but Emerald’s illusions are just as handy. These guys are definitely a force to be reckoned with. 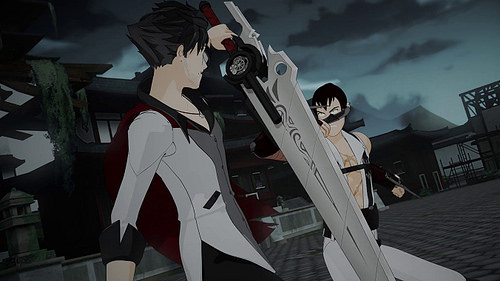 This fight is incredibly impressive and shows what a battle of professionals is like. Qrow and Tyrian are clearly fighting at a very high level here. Surprisingly Tyrian seems to have the edge for most of the fight which shows what a threat he is. The scene of Tyrian punching him was awesome since we rarely see a fighter attack without their weapon. The group fight prior to this one was a lot of fun too and this was easily the highlight of season 4. I’m definitely eager to see Tyrian reappear in the next volume. Also hopefully Qrow gets back to this level of power. 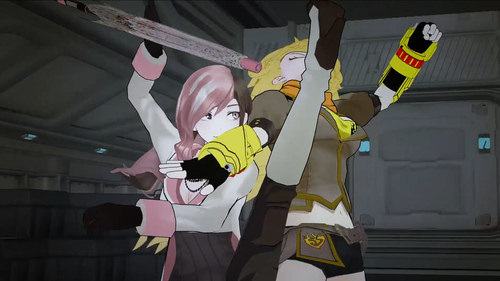 This fight doesn’t have anything fancy. Neither fighter is using any kind of special energy blast and they aren’t in a volcano or anything. It’s simply a very basic hand to hand fight where both combatant is doing their best to bring the opponent down. That’s part of what makes the fight so impressive as it’s just a really serious battle of skill. Neo is clearly a few steps ahead here and even takes the time to make fun of Yang in the process. Definitely a great way to debut (Not counting cameos) and Raven’s appearance at the end was also pretty hype.
2. Yang vs Mercury 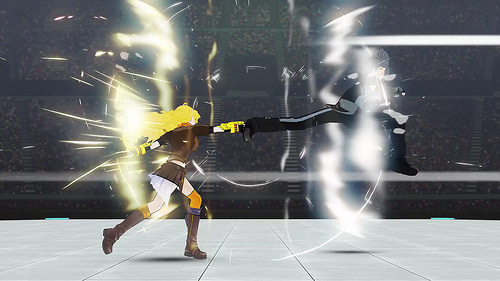 For a while this had been my favorite fight and it still holds up incredibly well. The battle music really sets the stage here. As soon as the first punch is thrown the tempo never slows down. Both fighters are absolutely relentless using every attack in their arsenal until the opponent is down. Their fighting styles of hand to hand vs kicks is also a nice contrast. It also helps that I’m a huge fan of both characters! 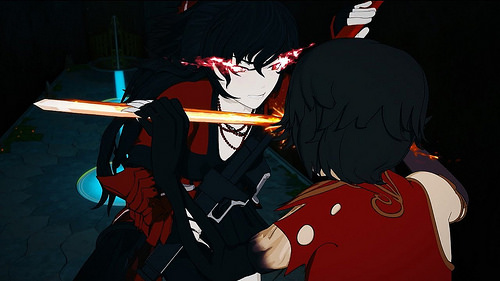 For all the heat the last volume has gotten in terms of avoiding fights, it definitely delivered with this one. While it’s hard to say if it was worth spending almost the entire budget in a single fight, it’s hard to deny the results. We got to see two of the strongest characters in the series duke it out and they weren’t pulling their punches. The strength and speed they exhibited is what you would expect from a Maiden. It was a great way to wrap up volume 5 and it’s also a high bar for all future Maiden fights. I will accept nothing less after seeing how great this fight was.

So that’s my Top 10! I look forward to seeing how many fights volume 6 will add to this. RWBY lists never get old, but my next ones/editorials will likely venture out into other franchises so be on the lookout for those!