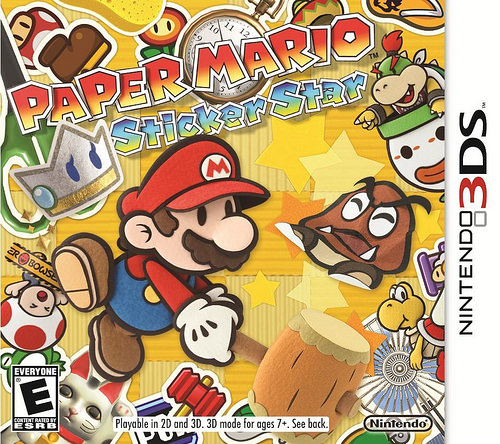 Paper Mario has always been pretty ambitious for a Mario series. The plots could get pretty serious and were certainly darker than the main series as they selves into Luigi’s psyche and had Peach turn evil. The Thousand Year Door was the peak of the series and could hold its own as an rpg against the mainstream ones like Final Fantasy. Then….this game came out. It’s basically a Mario game masquerading as a Paper Mario title.

The plot is paper thin compared to the old ones as Peach is kidnapped. Bowser has taken her away to his castle and Mario is going to need some help if he wants to save her this time. Fortunately he had a pal named Kersti who is some kind of Princess I think. I can’t remember to be honest but she talks a really good game and insults anyone who gets in her way. She reminds Mario that he will need to obtain the 6 World Crown Stickers to save the world and stop Bowser’s evil plan once and for all. Can Mario do it or will he end up panicking throughout the entire game!?

Right away the game’s main problem presents itself in the form of the stickers. Not only is the entire game built around them, but the mechanics aren’t even fun. You need them to perform any kind of action in combat from jumping to using your hammer. This means you really do need to take the time to pluck them off the walls or you’ll run out during a boss fight. The stage will throw you a few extra ones when you’re empty but only cheap stickers that won’t do a lot of damage. This gets very tedious very quickly. It doesn’t help that the bosses have an enormous amount of hp so the fights drag on for eternity. That’s also why running out of stickers becomes a legitimate concern since you will need a lot of stickers to finish them off.

The final boss in particular has around 5 phases and keeps healing between each phase. This just drags on the fight more and more as opposed to being exciting. You can’t jump on this opponent either so even though I made it to the final phase with a lot of stickers left, I couldn’t do anything. None of my jumps would do anything but hurt me and so I had to watch as my efforts went to waste. The game is built around trial and error to a large extent which is certainly not how a game should be if you ask me. You should be able to reasonably guess what to expect and win if you thought about it enough as opposed to just needing more stickers from the shop.

You’ll likely need to farm some coins at one point or another so I’d recommend 4-1 for that. There’s a shiny goomba right when you enter the level and a ice flower in the box next to him. Grab the flower and you can beat him in one hit which will get you around 100 coins. You can do this very quickly so just keep at it. I saved to about 2500 coins for the final boss and it was certainly worth it. The super stickers do have cutscenes that are unskippable which is unfortunate but they are worth it for the damage they dish out.

Another massive problem with the game are the puzzles. You probably know this if you’ve been reading my reviews but one thing I’m really not a big fan of are poorly made puzzles. It’s to the point where they can easily lower a game’s score on their own like Final Fantasy VII, Metroid, and Majora’s Mask. The same thing happens here but to a larger extent. Some puzzles require you to go all the way back from world 5 to 2 for example as you look for an ice sticker that can freeze the volcano. I had to resort to Gamefaqs a few times here because these puzzles are absolutely terrible. How could you possibly think to search a new world? Why would the ice be in the desert world instead of…..the ice world? The game is actively trying to troll you which I don’t appreciate and there are so many puzzles here that don’t make any sense. I think the only way you would figure some of these out is if you were planning to 100% the game anyway so you investigate every book and cranny. Even then, the same thing happens with the bosses as you have to try and figure out how to deal with them. My sticker “pal” mocked me after every fight as she pointed out that I used too many stickers so certainly don’t use my tactics.

This game just wasn’t all that fun and it’s a shame because the gameplay minus the stickers was good. Some of the levels had a little platforming so you would jump around and try to reach the goal. It gives you a small glimpse of what the game could have been like without the odd gameplay style. It also makes you wonder what the point of the stickers was because at the end of the day it is still basically a turn based style of gameplay. It’s just far more limited than the usual ones since you always have to worry about running out of stickers which is a really pointless feature. Throw out all of the many, many puzzles and this could maybe will be a good game even with the sticker system. Of course, then we are looking at a completely different game since this one was really built with all of those puzzles in mind.

As far as the characters are concerned, this Mario game plays it by the books. Mario is your classic lead who is always ready for a good time but really does panic at just about everything. Peach gets kidnapped as per usual, but gives a pretty nice speech at the end so that was cool. Bowser essentially gets controlled by the stickers so it wasn’t his best appearance. Seeing all of the old bosses was pretty cool like Gooper Blooper and Petey Piranha. Bowser Jr and Kamek also has pretty solid roles. The main heroine Kersti was also pretty decent even if she was rather generic the whole time. The big sacrifice at the end was certainly a pretty emotional moment when you think about it. Mario didn’t really put up much resistance to the plan but I guess we can assume that he knew about the true power of the stickers and figured it would all work out. The climax was pretty intense and in a main Mario game it would have looked awesome since Mario effectively got Super Saiyan mode at long last. If you ask me, it’s about time.

As far as the presentation goes, Paper Mario’s graphics hold up pretty well. They’re certainly. not amazing or anything like that, but they are good enough and get the job done. The character models are solid and the level environments are pretty striking as well. It’s a oh as good as I’d expect a modern Paper Mario game to look. The soundtrack is certainly less impressive compared to the average Mario games but it’s not bad. At the very least the main menu theme is quite iconic after hearing it so many times. I’m not likely to forget it anytime soon.

In terms of the replay value Paper Mario is fairly decent. There is a set amount of large stickers to obtain so gathering them all would be an accomplishment. You can also try to find Luigi in his 5 appearances which will hopefully trigger some kind of cutscene. The main game is around 15 hours of more if you get stuck so that’s a very good amount right off the bat as well. So technically there is a lot to do here but you probably just won’t be all that tempted to accomplish all of this since the fun factor isn’t quite there. The post game is st least more enjoyable than the main game since the puzzles are already taken care of. It becomes a little more of a straight job from start to finish while you complete everything. Prepare for a lot of back and forth either way.

Overall, it’s rare for me to say that a game is actually bad. Over 90% of the games I’ve reviewed at least make it to 5 and most are over 6. This one just goes way too far with the sticker mechanics and the problem that the game isn’t fun. It’s not really a title that you look forward to playing which is the problem. It has its moments but every time you think the game is hitting its stride it comes back at you with another puzzle. They just keep on coming and never stop so the game could not save itself. I highly recommend playing the other Paper Mario games first as this one will really give you the wrong impression of the series. I can only hope that the next Paper Mario game has improved a lot from this one.