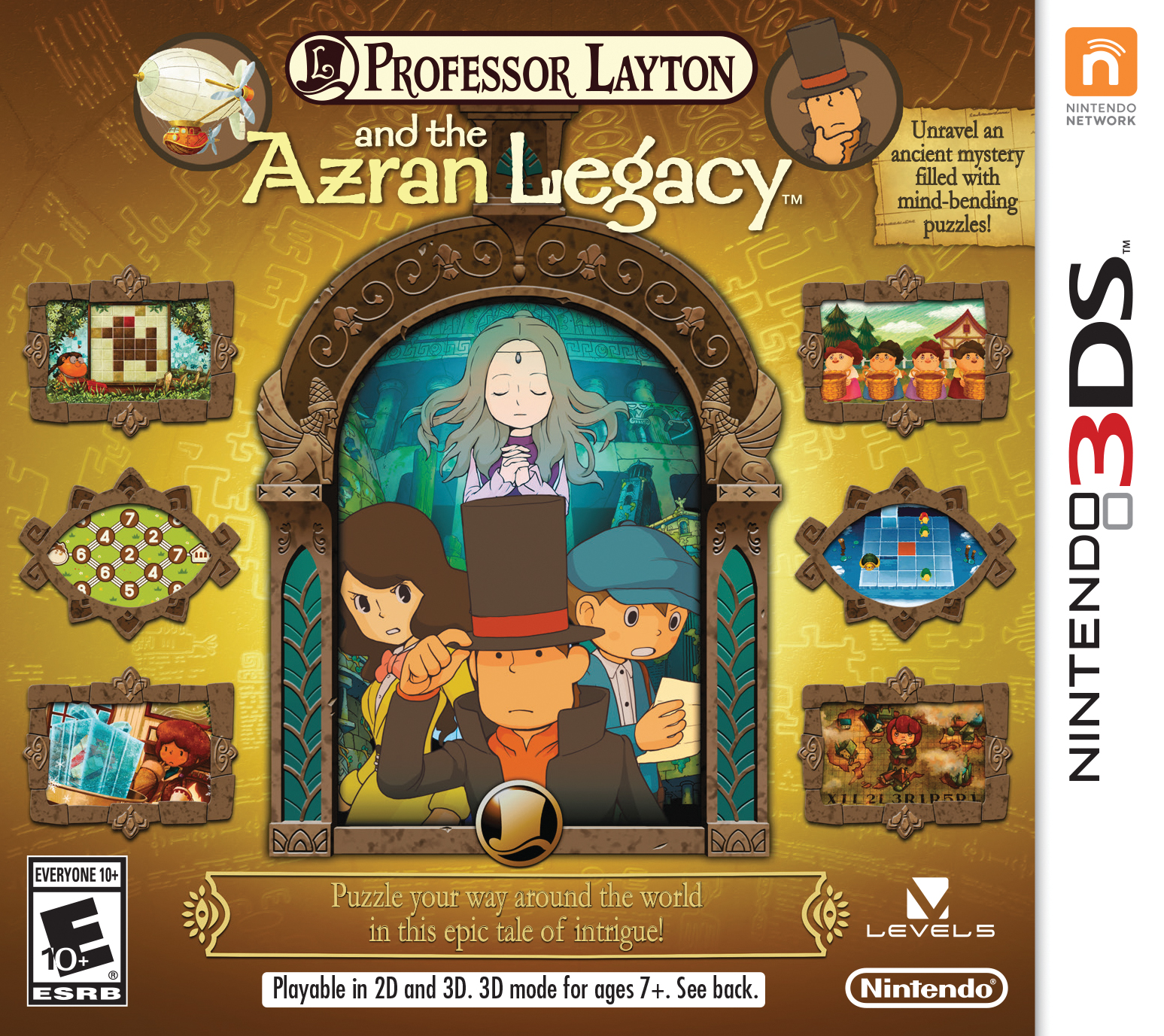 It’s time to take a look at the final Professor Layton game. This one’s been on my list to buy for a very long time so it’s nice to finally have it. It’s a nice conclusion to the series and I hope to see more games come out at some point. I’ll need to get the spinoff for the Switch soon. The Azran Legacy hits all the right notes that you’ve come to expect from the Layton series and it even added some platforming puzzles which was pretty cool. Throw in a lot of twists and turns and you’re in for a fun ride.

The heroes receive a letter from Sycamore asking for their help in solving the Azran legacy. The heroes need to find out what the ancient civilization left for the modern generation and if this is a good thing or not. Unfortunately there is a villain group known as Targent which is after the Azran legacy as well. Layton manages to save a girl named Aurora from their clutches. She has been in stasis for hundreds of years and is the Azran messenger although most of her memories are gone. Perhaps they will return as the heroes collect more of the Azran relics. If the heroes gain them all they will be able to open the door to the future. Time is not on their side though.

This game definitely goes more into fantasy/sci-fi territory than the previous ones. The Azran have technology that is quite advanced including lasers, robots, and the ability to keep people alive for hundreds of years. You can reasonably say that this is technology we will have in the future though. The Azran don’t seem like the nicest people out there even if they may have a lot of good points about how humans are still corrupt in the present. The Targent officials don’t paint the brightest picture of humanity. There are two main members of the group who function like Team Rocket. They’re not really a threat to Layton, but they always get up for another go at things.

The gameplay is the same as the other installments. You travel across different lands and gather information on the mystery. Typically people will only give you clues if you solve their mysteries. Once you do that then they become a lot more receptive to your cause. The puzzles come in all shapes and sizes and they’re pretty fair for the most part. On occasion you may see a puzzle that doesn’t make sense from the description, but it makes sense in hindsight after seeing the solution. Trial and error will get you far, but you’ve also got puzzle coins for the ones that really stump you. So long as you activate the coins you are given hints which make the puzzle a lot more manageable.

There are also a lot of minigames and other little features to have fun with. A new addition to this game is the newspaper which you can use to read about various events. The main game should take you around 15 hours or so to complete and the post game content of completing every puzzle will likely extend this to around 20 hours. It’s a pretty good deal for your buck and it could also take over 20 hours depending on how you’re able to handle the final puzzles. Some of them certainly get really difficult by the end.

As always the game doesn’t cheap out on the graphics. We get fully animated cutscenes which is a lot of fun and in general the graphics are quite clear. It all feels very polished which is always a good thing. The soundtrack brings a lot of the familiar tunes back. Although I would have liked some new themes too, these worked well enough for the scenes. It’s all got a very peaceful air to it.

Layton is a very solid protagonist as always. He’s a quick thinker and can usually stay one step ahead of the villains. He can also fight when necessary like when he got into a sword duel with the main villain. He was able to win despite having the inferior weapon. Layton also manages to stay as a gentleman no matter what is thrown at him and that’s absolutely crucial. You can’t break down when the going gets tough. Luke’s a good trainee to have as always. While he isn’t quite old enough to really help Layton out in all of the cases, he does what he can. He’s not the kind of kid to hesitate.

Emmy is a lot of fun and has really helped the group’s dynamic in this trilogy. She’s always upbeat and ready for a good puzzle. She has a bit of a rivalry going with Luke as she likes to mess with him quite a bit. As Layton’s official assistant she is also quite adept at puzzles and her martial arts are second to none. Then you’ve got Sycamore who is a puzzle genius like Layton. The guy is rich and resourceful so he is quite helpful in this game as well. He seems to have a solid honor code and is always ready to put the mission on hold to save people in trouble. He may have shown up out of nowhere, but is very important to the game’s plot.

Aurora has been in stasis for a long time so she doesn’t know a whole lot about human culture. Fortunately the game doesn’t play that up to a crazy extent so she’s not a bad character. I felt bad for her near the end when everyone just watches as someone gets ready to stab her. Couldn’t someone have manned up to stop this from happening? If I were Aurora I’d be pretty sore at this whole chain of events. She took the situation well and didn’t take things personally…even if perhaps she should have. Then we have the main villain Bronev. He’s a fun villain leader although his screen time is incredibly short despite being the head honcho. I think adding in some more scenes would have helped to make him more memorable. It’s hard to have any sympathy for him even when he gets his origin story though. His actions make 0 sense and so I’m glad that Layton shut him down even if he wasn’t as merciless as he could have been. I’d have had Layton end with his first line and not say the last few.

The game is a mystery so we have a few twists and turns. There are 2 main ones. One of them you’ll likely have figured out from the opening level depending on how you’ve been watching the patterns. You may not guess the exact twist, but it’s one that the series has already used 2-3 times so you’re almost expecting it. The second twist was a lot more unexpected though and worked pretty well. The game really put Layton through the ringer having to deal with all of this. The twist does hurt the second character a lot though. The first character was never truly changed so that’s one thing, but for this character it’s a 180. It’s just hard to come back from something like that and it’s probably why the character got written out. (And because the series ended)

Overall, Layton and the Azran Legacy is a very solid installment in the series which can hold its own against the others. My favorite is still the time travel adventure but after that most of them are pretty neck and neck. One thing I’ve liked about the prequel trilogy is how all of the games tie into each other pretty well. The Azran were referenced quite early on in the prior games. Emmy also adds a lot to the dynamic so it’s hard to go back to just Luke and Layton in the present timeline games. Layton can fight, but usually chooses not to so having someone like Emmy who isn’t afraid to throw down definitely helps the group quite a bit. If you haven’t played this game yet then you can change that. The games work well as stand alone adventures so you don’t need to play the previous 5 games to understand this one although it would certainly help you know the characters more.

2 thoughts on “Professor Layton and the Azran Legacy Review”