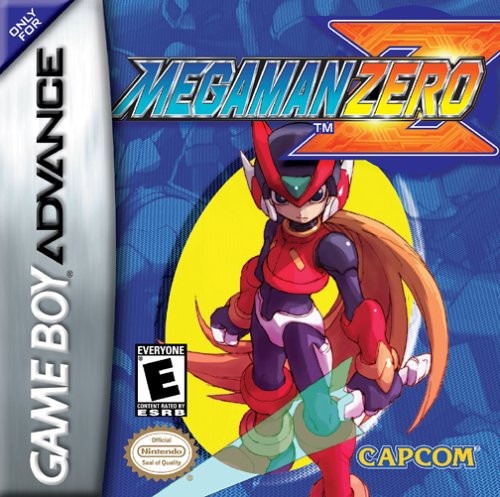 It’s time to look at the original Megaman Zero game. I’ve always thought that the Zero games had some of the most dynamic covers in the series. The overall art style helps you feel like the games do take place a lot farther in the future than the X titles. The plots were awesome and in many ways the games were ahead of their time. That being said, what holds this one back are some mechanics that fortunately didn’t make their way into the sequels. As a result while this game is good, it could have been way better.

The game starts with Zero being revived into a new body. It has been many years since he was active to the point where he is known as a relic of the past. Ciel is the lady who has revived him and she explains that X has gone on a rampage trying to murder all reploids. Zero doesn’t think this sounds right, but is quick to agree that X has to be destroyed. He’ll do what he can, but the resistance is fairly small and X has legions of powerful mavericks on his side. If Zero can’t defeat them all in time then there won’t be much of a planet left to save.

The idea of X turning rogue is definitely an interesting one. The guy was always so heroic that it’s hard to picture him turning evil, but being resurrected does tend to have a pretty big effect on a person’s psyche. X would hardly be the first person to turn evil from the experience. A game actually adapting the Elf Wars would be awesome, but Megaman Zero gets to start you off with a lot of suspense which is always a good thing if you ask me. The stakes are also high as you see guys in the background getting destroyed quite a bit as the game goes on. While the ESRB doesn’t list any blood in the game you may think otherwise as you look in the various level backgrounds. It’s clear that the mavericks aren’t pulling any punches in this game. The Zero saga is easily the darkest one in the Mega Man franchise.

The gameplay is pretty easy to get used to, but difficult to master. You have two main weapons, a buster and a Z saber. You can use these weapons to slay your enemies. You can also dash and jump so be careful to get out of enemy range. Of course, that will cause minions to re-spawn if you go too far back so always charge forward. The bosses are very difficult so the best thing to do is dodge their attacks entirely. Play it safe until you master their attack strategies and you’ll be fine. They all move very quickly so you’ve really got to get it all down to muscle memory. If you do that then you’ll be in good shape.

You can level up your weapons by using them a lot on minions. One easy way to max them out is to go back to one of the first levels and attack the tower that never moves. Just keep attacking it for about 40-50 minutes and you’ll have the weapons maxed out. They don’t learn a whole lot of new skills, but the Z Saber has a charge attack that’s neat and the buster gets to charge faster which is handy. You can also farm Elves this way which you can then use in the levels. An Elf aids you either in a direct way or through a supportive role. These can mean the difference between life or death in a fight. Just remember to activate them manually or they won’t take effect. You also lose the Elf whether you win or lose in the level.

This brings us to the mechanic that slows the game down though. You have 3 lives in the game and you don’t get any more. The only way is to beat a lot of enemies and hope they drop a life. I beat many enemies and I never saw a single extra life but apparently it is possible for them to drop one. It’s just really rare. This is a very difficult game so you’re going to really need those lives. The final level is one of those classics where you have to fight all of the bosses again. I was able to beat 2 bosses, but then I lost to the 3rd. Doing all of this with a single life is pretty crazy hard. Additionally you have to click through the cutscenes each time you re-start since the file loads you to before the conversations.

The game also made it so if you lose a level then it vanishes completely. You only get 1 chance for all of the levels except the big ones like the intro, finale, and a level near the middle. Otherwise the bosses just get away and Ciel thanks you for trying to stop them. It’s an interesting mechanic to have the game continue, but I don’t personally like it. I can’t think of a game where I was glad such a system was implemented. It didn’t work in Armored Core or Pikmin and it didn’t work for this one. It’s the main reason why this is the weakest Zero game for me. Between that and not getting any more lives it feels like the game is being way too harsh.

As for the graphics, Megaman Zero is definitely top tier there. The colors are very nice and the effects are ahead of their time. This could easily pass for a DS game. It’s sprites at their finest and so it can challenge the earlier shaded style of the DS and 3DS. It all looks perfectly dark and dreary to match the tone while still using a lot of colors. Zero is more of a dark purple than a light red like in the old games for example. Then the soundtrack is top tier as well. A lot of the tunes here would go on to be fan favorites and I often enjoy listening to them online.

Overall, Megaman Zero is a fun game, but one that does have its share of issues. The game is very short and you would be done with it in about an hour if you actually manage to win the levels. I got to the final level in about an hour after all and it would have been sooner if I didn’t stop to grind out the weapon levels. The difficulty should make this longer than an hour of course, but it feels artificial to an extent. The lives should not be limited and should replenish when you get a game over like in other titles. The soundtrack and smooth gameplay ensure that you’ll still have a lot of fun. You’ll probably end up watching the cutscenes online so you actually see how it ends. It’s all very engaging. If you don’t mind only experiencing some of the game then I definitely recommend buying it. Otherwise you should start with Zero 2.