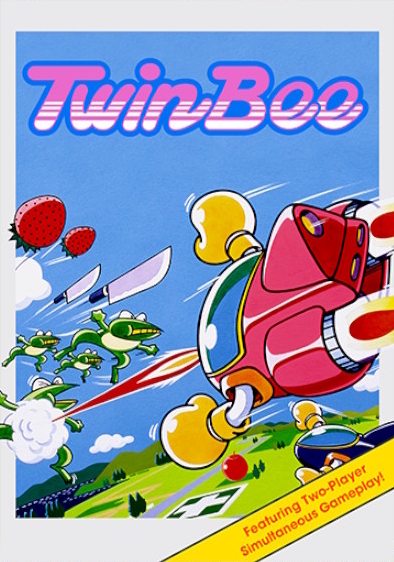 I actually played the sequel to this game before the original back when I was blasting through all of the SNES games. So it’s definitely pretty nostalgic to go back to the original here. The cover still looks like it’s saying TwinBoo to me until I look at it closer. I blame it on the fancy way they wrote the boxart. Either way this is a fun shooter game. It’s definitely one of those really quick one that loops almost right away though. It’s got a pretty fun dynamic to it though and some interesting mechanics even if they take a while to figure out.

So the gameplay here is that of a shooter where the screen is always scrolling up. You have to keep up with the screen and blast away at all of the enemies that get in your way. There are enemies on the ground as well which are tough to deal with since your normal blaster only shoots forward. At the beginning of the game you are able to shoot down a bit with the other button (A or B) but I ran out of ammo very quickly and couldn’t figure out how to get more. I’m sure there’s a way though. For the most part you just keep focusing on blasting away and eventually you will reach the top. At the end of each level there is a boss that must be defeated. There are 6 levels so this may take you around 20 minutes give or take a few.

One interesting mechanic here are the bells. They show up when you blast a cloud and change colors as you blast them. I only noticed white and blue, but I believe yellow and red may be present somewhere too. I couldn’t really figure out what they do though. White seemed to just increase your score and Blue would maybe give you a bit of extra speed. Beyond that they didn’t have a noticeable impact. It’s an interesting mechanic to have to blast your power ups as you go through the stage. I can’t think of any other games that really do that and it gives you an extra thing to focus on. It gives the gameplay a little more depth because now you have to decide what to prioritize, getting the power up or blasting the enemies away.

As always the rewind feature will be super helpful here. Without it the game may ultimately prove to be a little too tricky. These games have definitely proven to be extremely difficult in the modern day. I still think I wouldn’t be quite as big a gaming fan back then as I am today with all of the modern conveniences. If anything I probably would have mostly stuck to RPGs once they started coming out since they always had save features at least. RPGs and fighting games, the rest of the genres would have lagged behind a bit.

As for the graphics, I’d say that they hold up pretty well. The levels are nice and bright with a good amount of variety. The enemy designs are good too and I didn’t notice any lag during the game so the system was able to handle all of the models pretty well. The sound is more on the generic side so I don’t think you’ll be remembering much there. Lately quite a few games haven’t exactly wowed me with the soundtrack but they can’t all be winners.

Sometimes I’ll throw in a tip or two for a game like this, but there isn’t a whole lot to say beyond the obvious. Be careful with going too high up in the screen or you’ll be surrounded and will likely be defeated. Always take down as many enemies as possible. If you can’t take down the grounded units then at least beat the aerial ones. I’d also say to keep all of your aerial bullets during the opening levels because they will be incredibly handy later on in the game. That’ll be when you will really wish that you had some at the ready.

Overall, TwinBee is a pretty fun game. Ultimately what holds it back from a higher score is what holds most of the NES games back. It’s just too short. As fun as a game is I can’t totally recommend it when it’s under 30 minutes. This one’s free so you should still check it out but it won’t last long. There is also effectively no replay value here since there is nothing to do after beating the game. I suppose you can work on increasing your score at least.