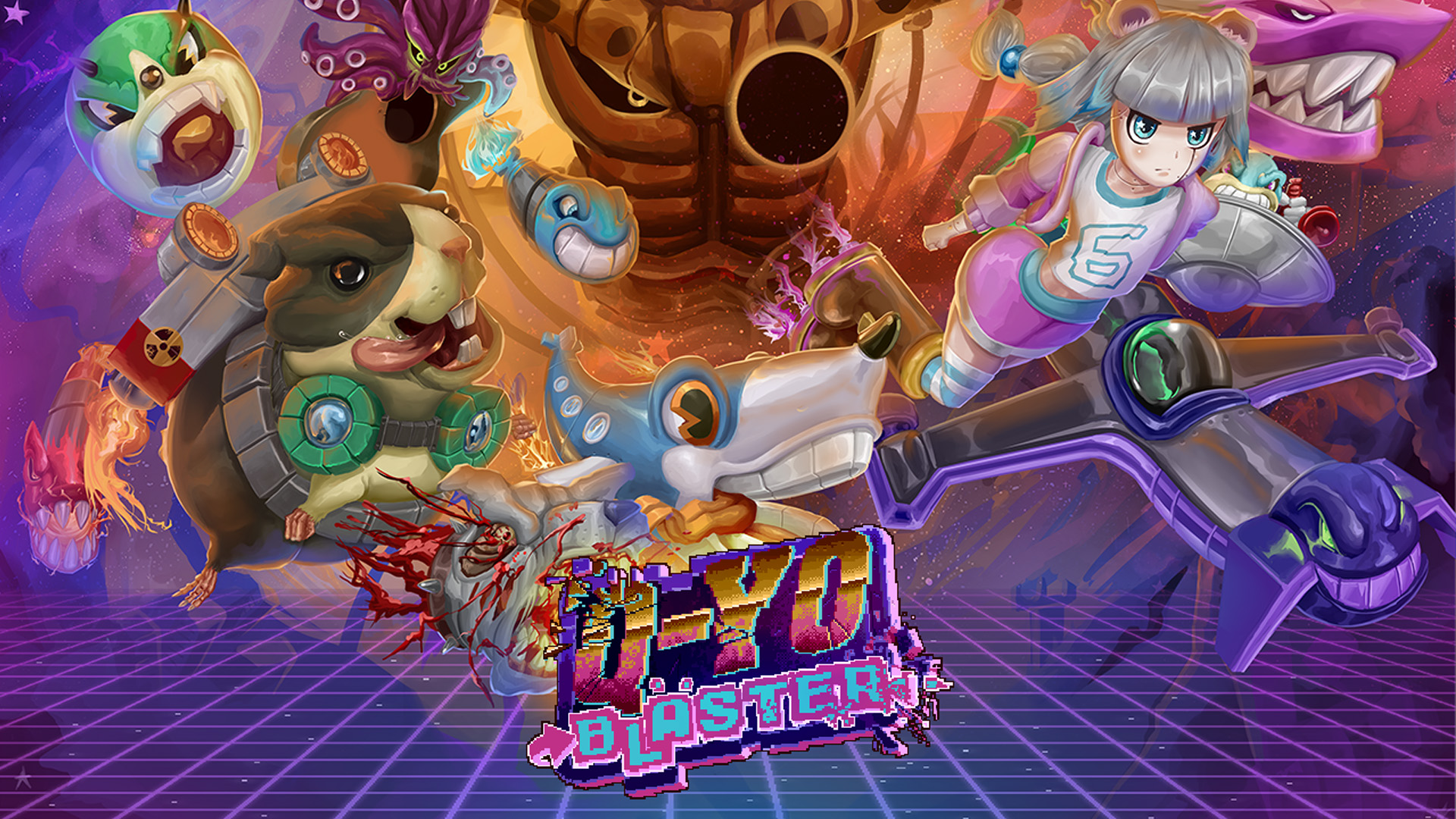 It’s time to look at a game I got for a pretty solid price on the Nintendo Eshop. After buying the latest Super Smash season I had some gold coins to spare and considering this game usually goes for 10 it was a steal. This is your classic bullet hell kind of game. It’s definitely nothing fancy and the game is fairly short, but it makes for a fun ride. I’ll give the game some extra props for actually having a real story mode with an ongoing plot. Even if the story is a little hard to follow.

From what I gather, there is a group of space fighters who have been dealing with a powerful enemy across many planets. They’ve finally tracked him down but he has a few more tricks up his sleeve. Right from the jump I can confirm that not all of the characters make it through this adventure so don’t grow too attached to them. Some of them just weren’t ready for this kind of rumble and it shows. The cutscenes can also get a bit violent which you may not expect from such a seemingly upbeat game. Don’t let the cartoons fool you, the game has some Bendy kind of themes beneath the surface.

Part of what made this game standout to me was the colorful art style. It reminded me a bit of Cuphead and I haven’t even played that game yet. You just get that nice fantasy feel only this time you’re in outer space. The villains range from cartoon type creations to giant abomination type monsters. You really never know what you are going to expect from each level and the constant guessing is what will keep you intrigued. This game is really about being as surreal and out of the box as possible which works out pretty well. It helps the game stand out which is important since the Eshop has almost limitless games at its disposal.

For the gameplay you start out by picking your fighter and weapon of choice. Afterwards you’re thrown into the levels and the idea is to blast away at the enemies in front of you. Grab as many orbs as possible because they let you fire off your super laser more often. Additionally you also have a pulse that turns all enemy bullets into coins so you should definitely save that for when you really need it. It takes a while to reload this so if you use it early on, chances are that you won’t get it again until the next level. You want to pace yourself here although the levels are pretty short. I recommend saving all techniques and power ups for the boss at the end of the level because that’s when it will be most efficient.

After each level you are able to pick a power up to use. By the end of the game you will have them all so it’s really just a matter of which one you want to go after first. The order doesn’t make much of a difference but I do like this approach. It’s always really handy to be able to see your character improve as the game goes on. The length of the game is pretty short though. You should have it completed in around 30 minutes. For replay value you can play the game on hard, but I don’t think that will be a very tempting offer for most. Part of the issue here is that the enemies don’t really get more difficult in terms of attack patterns, mainly they just get a lot more health. It’s hard to beat just about anyone and makes the levels drag on more. I only did around 1 level of hard mode before calling it a day here.

The graphics are pretty nice. As I mentioned earlier, the art style is solid which is important. My only real complaint is that the font color they used was a poor choice. It’s a light blue that seems to camouflage with the various backgrounds throughout the game. That’s just not a very good stylistic choice. You have to strain your eyes to keep up with the text which just feels like a basic mistake. I’ve never had a game mess up with the wording colors before and am surprised it wasn’t caught during play testing. It’s not a huge deal but it is quite noticeable.

Overall, Q-Yo Blaster is a fun bullet hell game. Considering that it’s only a dollar on the Nintendo Switch Eshop right now I’d say that’s a bargain. It’s not particularly long and you may not play it for long but I’ve always said that you can’t go wrong for a dollar. It’ll last you longer than a cheeseburger from McDonalds or any other kind of food that you can buy for that price. You just can’t go wrong here and I think that’s the important thing in all of this. I’d recommend checking it out and testing your reaction times. You’ll need to be fast to dodge all of the attacks.