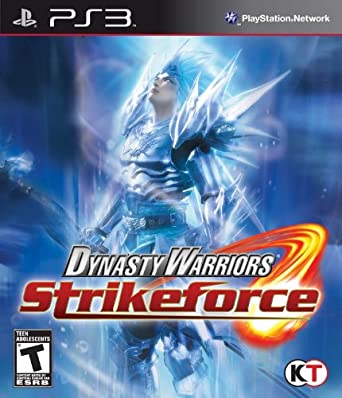 It’s time to look at a Dynasty Warriors spinoff. The concept behind this is pretty interesting. What if you took the usual Dynasty Warriors setting and then added a bunch of supernatural elements to it. I’m talking full dragons, super forms flight, energy blasts, etc. It’s definitely going in a different direction here. You’ve also got a few different crossover missions you can tackle and even a whole new section after the credits. Unfortunately a game is only as good as its gameplay and that’s where this one faltered. It was ultimately unable to live up to its true potential.

The story follows the same plot as the rest of the Dynasty Warrior games. You are tasked with uniting the kingdom under your rule using whatever tactics you need too in order to do this. I went with the classic Team Wu of course since those guys are always pretty neat. From there you’re off to the races. The game has 5 main chapters which each tend to have around 7-10 levels in them. After the credits you unlock a 6th chapter which which I would assume probably has another 5-7 levels in it but hard to say. Looks like you need to beat at least some of the request levels before you can tackle the story one. Not sure I’m a fan of that concept but it applies to the other chapters as well so the game is consistent.

As mentioned, my main gripe here is with the gameplay. Gone are the classic beat em up controls where you would go around and take down whole armies. This one plays out more like a mobile title as you have to take down enemies in small locations. Once you beat all of the enemies in one square then you can go into another room. Mind you, you don’t have to always beat everyone in the room. It depends on the mission and sometimes you can bypass rooms all together. I’m not sure if this would be a different genre or still just called your usual beat em up. There’s a lot more platforming in this game to be sure though as you have to jump around a lot and dodge the water. No swimming in this game.

The enemies are all pretty difficult including the minions. They’ll readily interrupt any kind of combo you try to use. The minions in level 1 have a higher A.I. than the minions in the final levels of the main games. So that’s pretty impressive but when you couple it with how unrefined the gameplay is then what you get is a scenario where you’re never actually able to cut loose. Everything you try to do is interrupted by the opponent without missing a beat. It makes the combat not very satisfying at all. You don’t even have a parry system or anything like that to stop them. You just have to eat the damage or waste a super. Unlike the main games the minions will never drop items either so restoring health just isn’t done unless you can find the rare vases scattered around.

In the end I had to resort to some cheese tactics. I bought the best bow money could buy and loaded it up with poison orbs. Poison deals a percentage of the opponent’s health which is incredibly helpful for bosses since it effectively bypasses health. It’s also good for staying afar since going up close is just asking to be completely wrecked. I was able to buy a bow with 268 attack power at the end and that was able to get me through the end. I did need to stock up on 30 potions and 10 Max Ether type items in order to do it though. You’ll be going to the shop quite a lot to make it through.

Strikeforce has a full hub world which is different from the others as well. You are able to manage a bunch of shops in the city and you level them up after waiting a while. Time passes in the game whenever you finish a level so the quickest way to get time to go by is to start a level and immediately surrender. Rinse and repeat as you watch the levels go up. Once a level is maxed out you have to use some items to upgrade the store further. Try to have the stores to at least level 3 so you can get some good items to buy. For the weapon shop, the higher level you can get it the better. I think you can’t get the 268 bow until it’s at level 4 so keep that in mind. There’s a lot to watch out for.

If you opt to fight with a sword instead of cheesing through with an arrow then just know that you’re going to need a lot of level ups. Earning levels isn’t the easiest thing in the world but by the end of the game I was nearly at level 50 which is the max so I guess it wasn’t so bad. The first level is the easiest one to grind. Just make sure you defeat 1000 enemies there and then clear the level. If you do it on hard mode then you’ll get 1000 EXP each time you do it. Not a bad deal right? Still, I can’t really picture beating some of these guys using a sword. In particular the various dragons and monsters you fight seem like they’d be a nightmare or the levels where you have 4 bosses running at you at once. Divide and conquer is always your absolute best strategy as long as you have some items with you.

The graphics are pretty good although they’re definitely a cut under the main games. It also feels a bit lazy at times because they actually reuse animations from the older Dynasty Warrior game for the cutscenes. They actually play the same cutscene after each chapter except for the final one where we get a new one but no voice acting from the characters. For that you have to wait until the after credits scene which is admittedly pretty hype. Now that’s a good way to really get the blood pumping I’d say. The soundtrack is pretty good. Maybe not too memorable but it gets the job done.

In terms of content this game will last you a while. The story mode took me around 10 hours and I didn’t do the extra chapter at the end. Trying to beat that game should add quite a bit more time into the playthrough and same for maxing out all of the shops. Achieving 100% completion status in this game definitely would not be very easy. Still, that means it’ll be around for a while at least and the going rate is pretty low. I’m confident they would be able to improve upon this one quite a lot if we ever got a sequel.

Overall, Dynasty Warriors Strikeforce is definitely one of the weaker ones in the series. It really takes out a lot of the positive elements from the series. It’s a spinoff though so I suppose that’s the best place to test out these new gimmicks. They didn’t work out but this was the right way to do it as opposed to risking it on a main installment. If you want to see a very different kind of Warriors game then it may be worth a shot. The gameplay just isn’t all that fun to me which is unfortunate as a beat em up but it can be satisfying to finally get the feel of the bow and start launching some counter offensives of your own. I also like the whole superhero aspect they went for here with all the powers being thrown around.