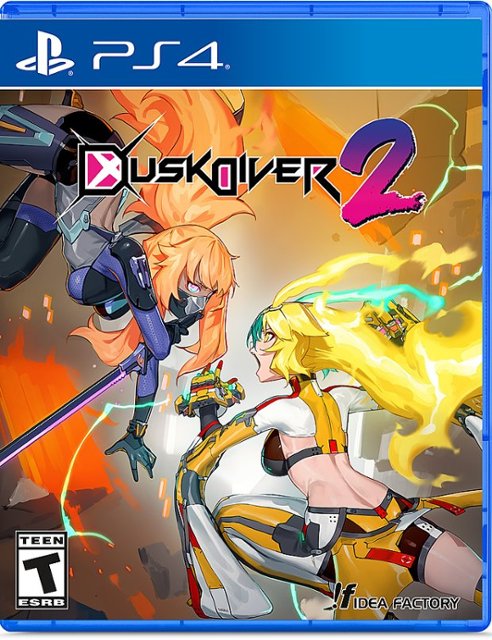 It’s good to have Dusk Diver back in action. I thought the first Dusk Diver was quite a bit of fun even if it was real short. Well this game continues with that action while also being longer so that’s a good thing. In some areas the budget does begin to show itself and I think the game could have masked that more but either way you’ll have a fun time here.

The game starts by explaining that Yang has somehow kept her abilities after the first adventure. Additionally her teammates can still turn into animals at times so clearly some ties to the gates have stayed in place. The heroes have to look into this but in the meantime a mysterious kid has appeared in the other world and the government is starting to act really shady as they create a lot of barriers. When you throw in another faction that wants nothing more than to destroy the world, the heroes know that they are going to be in for a tough time here.

I wouldn’t say the plot itself is amazing compared to the average RPG but there’s enough in here to keep you engaged. It has a bit of a slow start but once the dark diver shows up then the game really starts to cook. I’d say that it also went all out in the climax with the big villains and fights there. You can see all of the potential here and how this would make for a great anime. Throw a solid budget at it and there will be no looking back. There’s still a lot of comparisons you could make here between Yang and Yang from RWBY. Their personalities are different but the similar power set and character design will always be fun to note.

The gameplay is your classic beat em up style. You control one character and try to destroy all of the monsters. Beating all of them allows you to then proceed to the next area so you keep on repeating those steps. You can buy new moves as you earn ability points and you also upgrade your weapons. You can even control how you level up by personally picking the attributes that you want to increase. The max level is higher than 100 so you can expect to go very far here. I made it to around level 100 before beating the game.

My only critique on the gameplay style would be that the enemies have a lot of health so it can feel like they are damage sponges at time. You aren’t in any real danger but beating them can take quite a bit of time. The combat system is rather basic too so you’ll really spend most of your time spamming the same moves over and over again. Not exactly the most explosive gameplay style. I always like beating enemies so it works out well enough but they probably could have done more with this.

The graphics are definitely solid. There aren’t a lot of cinematics here but the ones that we do get are fun. I like the lyrical song that plays when you unleash your final smash during some of the big bosses too and overall I’d say the soundtrack is good. The game succeeds on those technical areas. One odd thing is how the text boxes can’t keep up with the game is in the middle of a cutscene. You have to turn auto off and manually click through or it’ll be as if the characters are constantly cutting each other off.

Throw in a typo or two as well and those are the kind of cracks you don’t see as much in a AAA game. There is a lot of content to go through here though so they didn’t skip out on all the bonus content. I even beat the game without getting a significant amount of the trophies here. Unfortunately it doesn’t look like there is a level select and a lot of the trophies are miscible so I would have to go back to the start anyway. I’m hoping New Game+ at least lets you keep the collectibles so you aren’t completely starting from scratch but I’m not sure exactly how that works.

It does add to the replay value though so you can bet that you will be here for quite a while. This is no longer a game that you can just pick up and complete in a batch or two. My advice when playing is to max out your power right away so you end the battles easier and then save your gems so that you can quickly level up your weapon as soon as you have beaten the chapter. It’s always a good idea to do this since the boost is big. Additionally, make sure you eat food as often as you can and always buy something different. I bought every food dish I could find in the city and it paid off with a ton of extra EXP.

You also get passive stat boosts so there are really no downsides to doing this. You want every advantage that you can get in a fight after all. While the game isn’t super difficult, you can still be given a good run for your money if you aren’t careful. There was a boss or two where I just won with barely any health left. It’s very cheap to buy items though so don’t be afraid to buy a ton of potions and revives. Those always come in handy.

Overall, Dusk Diver was a lot of fun. In some ways I absolutely think they could have done more with it and I really zoom in on this because my expectations for the series are quite high. The concept is just so good and I always like this kind of gameplay after all and the characters are fun so right off the bat that’s a lot of advantages for this title. With more of a budget I think they can take this to the next level but we’ll see if they do that for a 3rd game. The new concepts and characters were all fun to see. There’s a lot more you can do with this world as well now that it has gotten so much development and build up. Especially since you could say this game ends on an even more open note than the first. There’s no reason why the series would have to end when you take that into consideration. If you want to play through an action title with a lot of combat then this should be right up your alley.