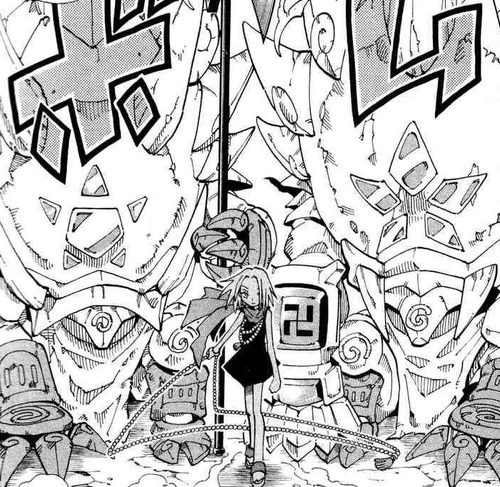 Suggested by iKnowledge Anna is a skilled shaman who is especially proficient with nullifying enemy attacks. She can protect herself well and a defense also does work as a good offense. When necessary she can also take out her twin spirits who are fairly large and powerful. On the other hand Raven’s abilities are more versatile as she can create shields and other such objects from darkness. Anna’s two strongest minions just aren’t quite strong enough to stop Raven, especially not when she unleashes her full power. Raven wins.

Manta is back and he’s here to take another loss. Anna is definitely out of his league and she takes the win with her spells and hand to hand combat skills. Manta drops down the ranks yet again and he may not be back for a while. If only he had gotten a good power up during the manga’s long run in the magazine. Anna wins.

Tamao Tamamura makes her blog debut! Of course she’s not nearly skilled enough to take down Anna. Tamao Tamamura loses her debut fight, but at least she tried! Anna was just too skilled, she even took on some of Hao’s minions in her time, Tamao Tamamura’s never done anything quite as bold. Anna wins.

Atlas has thunder powers and can zap things. One zap and no one would get up again. It must be because Atlas is so powerful. He’s so strong. He might just make it to the top. Atlas wins.