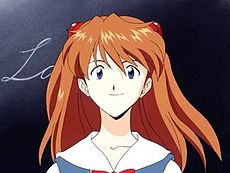 Suggested by iKnowledge Asuka has returned and now she’s up against the far less impressive of the Marvel iron fighters. War Machine’s always had a nice arsenal of firepower, but it’s a whole lot more realistic than Tony’s. He fights with conventional weaponry and that doesn’t really cut it. Asuka’s mech can take those kinds of hits for much longer than the energy blasts and while War Machine is durable I think he’ll ultimately be crushed here. Rhodey really needs an upgrade. Asuka Langley Soryu wins.

Suggested by iKnowledge It’s time for Asuka to make her debut on the blog. She’s got a pretty strong Evangelion on her side and in general is known as a strong combatant. It won’t be easy for Ironman to defeat her, but I do think that he has the skills to pull it off. His suit can match hers in both power and speed as well as surpass it. Ironman’s had dozens of suits in the past and his strongest ones are pretty incredible. The attacks will add up and Asuka will end up taking the L. Ironman wins.