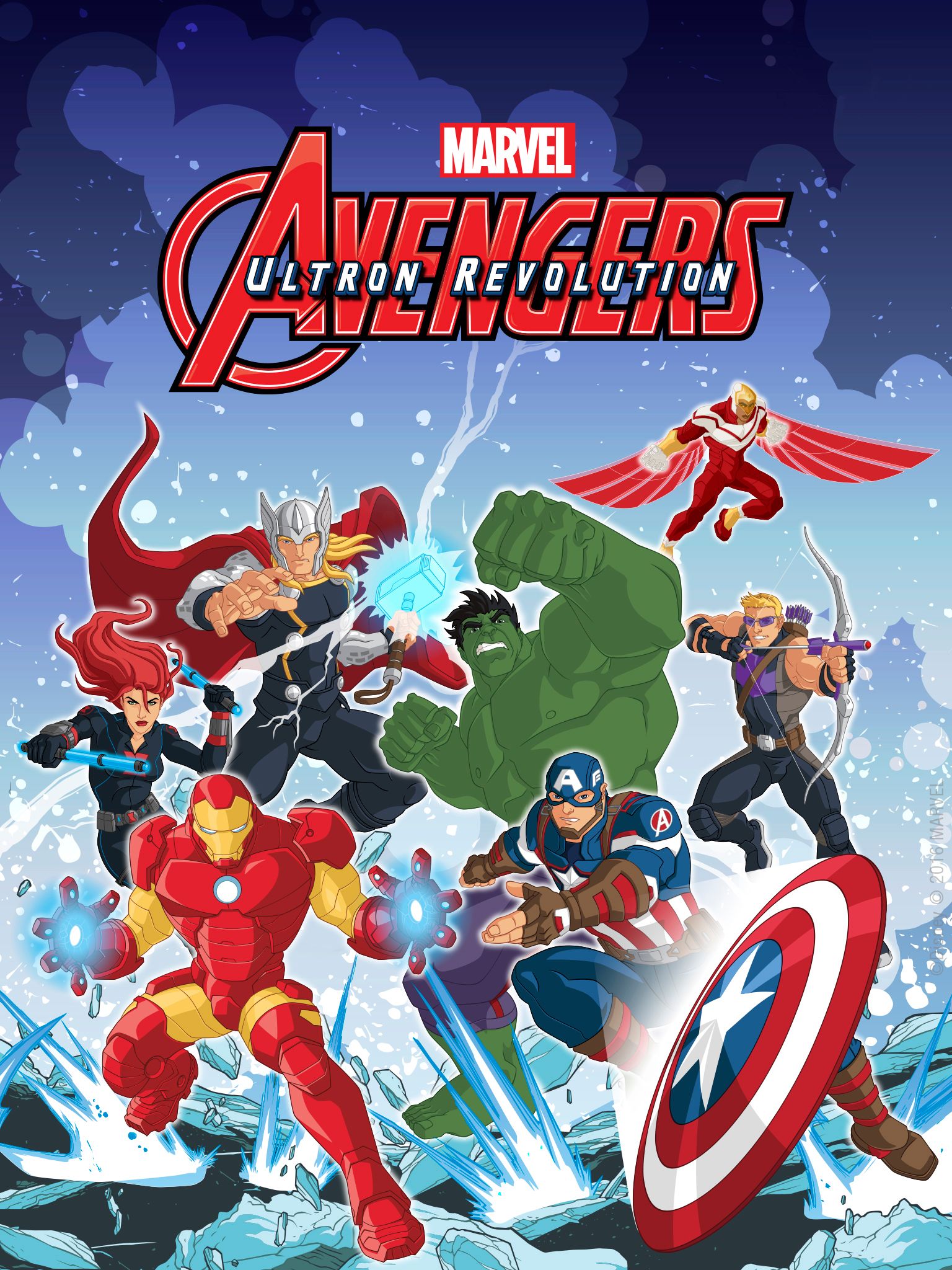 This Avengers show definitely ran for a very long time. It got over 120 episodes which is impressive for any title. It managed to reach 5 seasons and adapted a ton of different Marvel events and brought in all of the fan favorite characters. While it’s not quite as solid as Avenger EMH or the classic 90’s X-Men show, it’s still a pretty good team show. It’s a very good title that you’ll have fun with. It checks off the right boxes and from the current wave of Marvel shows I would definitely say that it was the best one. The Avengers are just fun to have around.

It was a little funny how the show started though as they bump off Captain America almost immediately. Naturally any comic book fan knows that this isn’t going to stick, but it’s fun anyway. The heroes try to stay serious and for irony they have Iron Man tell the other characters that this is no time for jokes. Everyone ends up joking and making banter anyway, but they do try to keep some serious-ness about them during the first episode. The first episodes tried experimenting with comic book panels for the animation. So the characters would fly for example, but the screen would shrink to a panel size. It was an interesting idea, but I’m glad that it was thrown out almost immediately.

Season 1 is mainly about Red Skull and his Cabal of villains. It’s always nice to have a good villain group and these guys could hold their own so it worked out. Attuma and Dracula are among the members and those guys are no joke. While the series was still just starting it was a solid way to incorporate the fights right away and you got a feel for the show. It’s certainly one of the weaker seasons overall, but it holds its own just fine. It’d probably be nostalgic to go back and see how season 1 has aged.

Season 2 has quite a lot going on. First off you have the arrival of Thanos which brings us a ton of fights and then you get Ultron’s big move. Additionally the Squadron Supreme shows up with their Justice League-esque members as they try to take down the Avengers once and for all. That was definitely one of the highlights here since those guys have never really gotten to appear in the Marvel comics before now. It was great to see them on the big screen at long last.

Season 3 brings back Ultron and also adds in the Inhumans as well as a Civil War arc of sorts. It’s another pretty packed season and I do think that the show really started to hit its stride around season 2, but it continued seamlessly into season 3. The show just looked sharper and had more engaging episodes. The Civil War parts are always fun and you can’t really go wrong with Ultron either. There were a lot of fights to enjoy here and the effects of these events did continue into season 4.

Season 4 brings in the Secret Wars which was definitely cool. It’s not handled nearly as well as it was in the old Spider-Man cartoon, but it is really hard to top that one right? It does span almost the whole season though so there is a lot of time for things to happen, but it’s pretty changed from the comic. There are less spontaneous battles and chaos going on which is not the Secret Wars that I remember. We really need a full movie adaption of that legendary saga. Now that would be a lot of fun. Still, it was like an ensemble of all the heroes throughout the series so that was cool.

Season 5 is definitely the weakest of the bunch. The show effectively became the Black Panther show instead of an Avengers title. I’m rarely a fan of Black Panther as the MCU is one of the only continuities to make him likable. Typically he’s just way too arrogant and is basically a villain at times. You can probably imagine that the show wasn’t able to change that so when he is the main focus there isn’t much to really hold your interest here. It’s a whole season just to show why he is better than the Avengers. The basic plot though is that the Shadow Council is framing Black Panther and they intend to destroy the world. To stop them he’ll need a lot of old artifacts from Wakanda and he may have to time travel to use them.

So there’s definitely a lot happening here. As I mentioned, starting with season 2 the show did get better. The animation improved quite drastically as the colors were sharper and it actually got a little closer to the 90’s in terms of style and design. There was even a good soundtrack with a lot of tunes that almost seemed directly ripped from the Justice League cartoon. I wonder if that’s even possible or maybe the shows used some public domain music. Either way it did make everything a lot more epic. 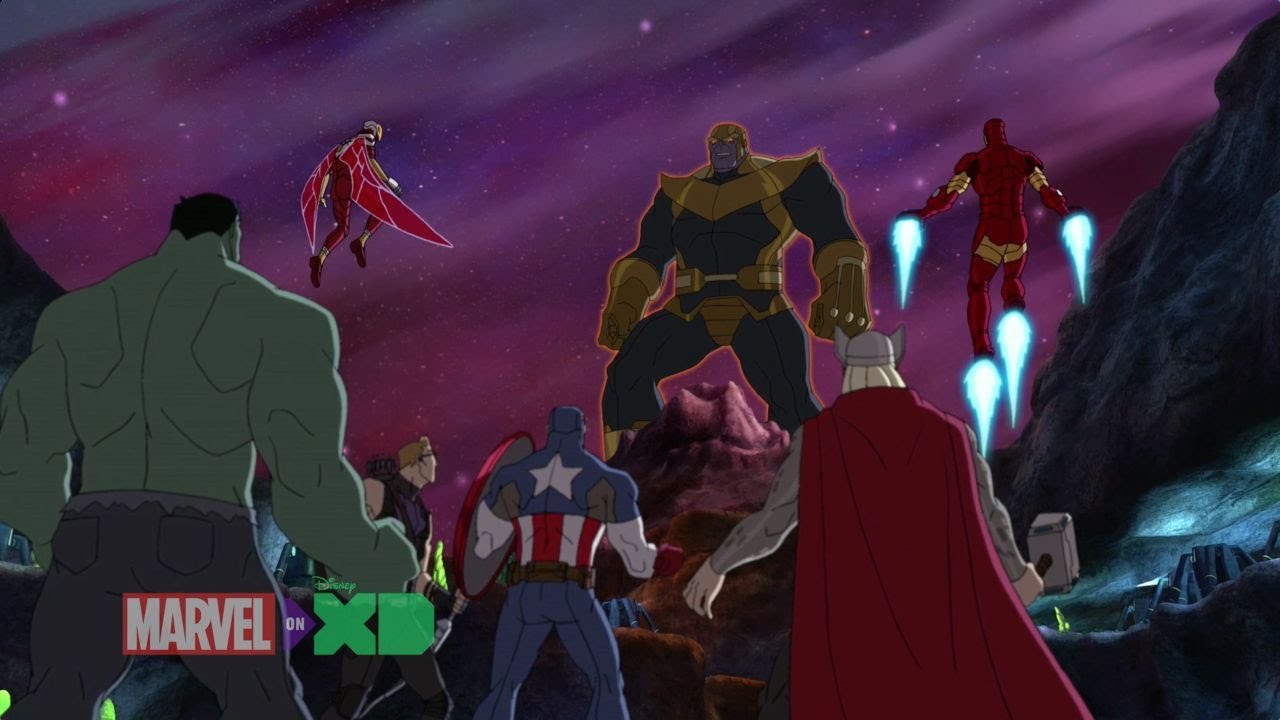 And yet…the show still couldn’t reach the classics. So why is that? I’ve thought about it a lot and it’s hard to explain, but I’ll do my best to convey it. At no point in this show do you feel any serious stakes or truly hype moments. In The X-Men show the Phoenix Saga was grand and a real page turner. The Spider-Man show had quite a few sagas like the Secret Wars and Avengers EMH had the whole skrull invasion. Assemble has a ton of arcs, but none of them are quite as solid as those were. I think there are two guilty factors here. One is the nonstop humor in the show. If the heroes are constantly joking during the fights and not taking it seriously then the audience can’t either. Why feel scared for the heroes if they’re getting choked and still making puns? Assemble never really knows when to take a break from the one liners but that’s also true for most modern cartoons. It takes away any sense of danger.

Then there is the fact that the heroes seem to be able to lose to just about anyone. We get villains as powerful as Thanos and the Beyonder and then have to try and take guys like the Leader seriously. The stakes go from being universal to street level and it keeps flipping back and forth so often that it destroys your sense of scale. A show can certainly go back and forth, but like with the comics if you keep on going too often then things are going to get a little messy and you’ll experience event fatigue. We can’t blame the animation or soundtrack since I already mentioned that those are quite good. I suppose you can take some shots at the fight scenes though. There’s no weight behind any of the hits. Fights like Thor vs Hyperion are decent, but they don’t come anywhere close to the fights of EMH or something like Justice League. Everyone hits about as hard as sandpaper.

The fights can still look good though and I do enjoy the action, it’s just on a completely different level. It’s why most of the current superhero shows are stuck at a 7. It’s a very respectable score and the show is fun, but they just don’t manage to get to “Great” status. You need more of an engaging plot and a really strong cast to pull that off. That’s not something that Assemble is quite ready to do. Maybe the show will come back and try to prove me wrong at some point. I’d definitely be up for more Avengers action and lasting over 100 episodes is definitely impressive in and of itself.

Get ready for a lot of power level shenanigans, but for a long running superhero cartoon like this one that is basically inevitable. This kind of thing never really hurts the score, you just gotta roll with it. Season 5 is particularly guilty of this as Black Panther beats the entire Avengers crew multiple times. The show tries to make him seem like Batman at times with how prepared for everything he is. Even when he gets betrayed he always tries to make it seem like someone else’s fault. Then you’ve got Ultron taking down Thanos with the gauntlet which was pretty fun. That one’s more believable since Ultron is well, he’s Ultron. Still, I remember that one getting a lot of headlines back in the day and we also can’t forget Iron Man taking on the Byeonder. At the end of the day this show is all about seeing your favorite heroes duke it out with a bunch of villains and it delivers.

As for the characters, they’re all about the same as you would expect them to be from the movies or the comics. None of them are particularly changed or anything. Iron Man is still the leader of the group who likes to goof off, but it always ready with a solution when the world needs him. Then you’ve got Captain America who is more by the books but will startle everyone with the occasional joke. Thor is unfortunately not very smart in this version so he sometimes acts more like the Hulk than the green behemoth. Ms. Marvel is here to cover the newbie angle. She just wants the team to accept her and since she is a kid they all see her as the rookie. Interestingly her character is completely different in the current Spider-Man show as she gets pretty overconfident there. I like to think that Teen Titans Go got this one right as Robin explained in one comic that characters just act differently depending on what crew they’re with. It’s why he’s so goofy with the Titans, but gets serious when Batman is around. I guess not having the Avengers around just makes Ms. Marvel a whole lot braver.

As for the villains Thanos and Ultron are definitely a blast. Thanos gets to really go all out in the battle on the Moon and the scene of him hitting Thor against the hammer definitely looked painful. Ultron plays mind games with everyone as always and definitely has a lot of firepower. Then you’ve got Red Skull who has a really big role here and makes for a decent villain. The Squadron Supreme also deserves a mention. They really should have beaten the Avengers most of the times they fought. Their team is just OP and it reminds me once again why the Justice League would totally school the Avengers in a fair fight. Their members are just way too powerful and completely out of their league. 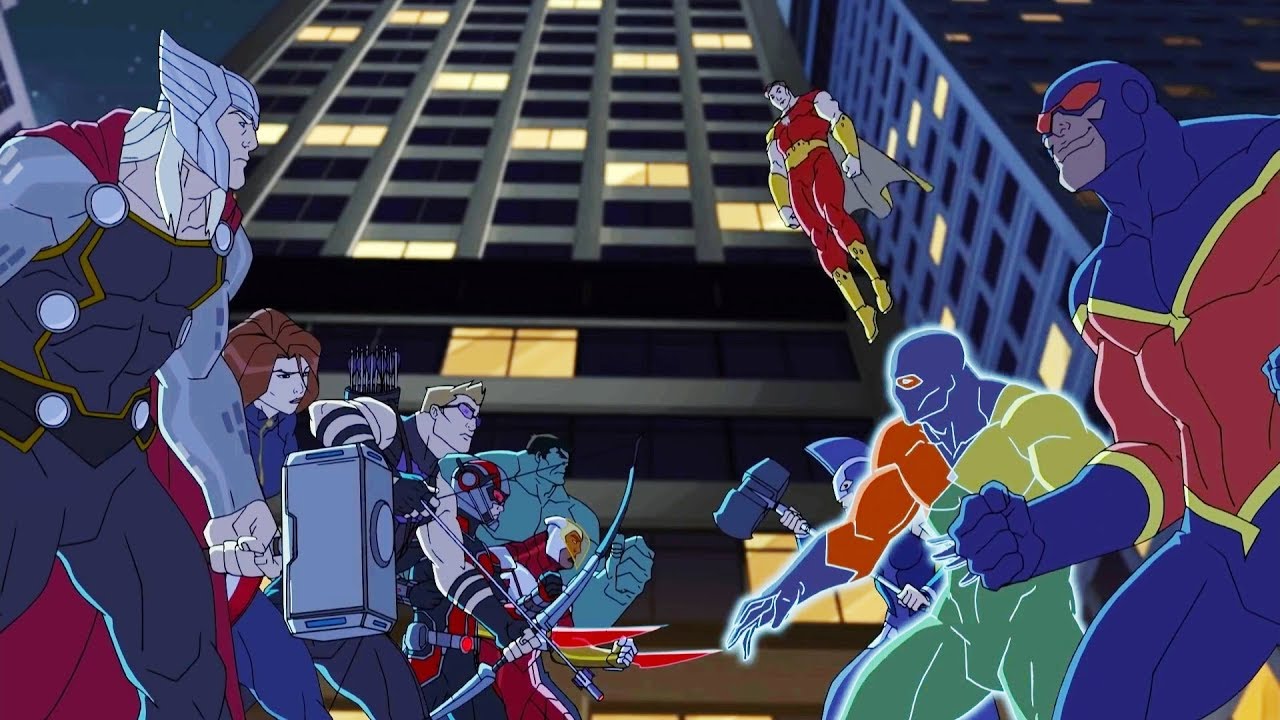 Overall, There’s not a whole lot more to say here. Avengers Assemble is definitely what you’d expect from a modern Avengers show. It gives us a lot of quality episodes and sagas. The show really takes advantage of the wide roster of Avengers through the years and how many characters they’ve faced. While the show may not contain the soul of the older titles, it still does a very respectable job. There isn’t really anything to dislike about the show and the large array of episodes ensure that it has a lot of replay value as well. It’s a show that you can pick up and watch at any time or if you have a favorite character you can look him or her up and odds are that the show will have introduced this fighter. The amount of guest stars here is quite impressive and having a consistently solid show that you could watch week after week is a very nice thing. If you are a big fan of comics or just like a good action show then I’d recommend checking this one out. It’s a good cartoon for a Saturday Morning.