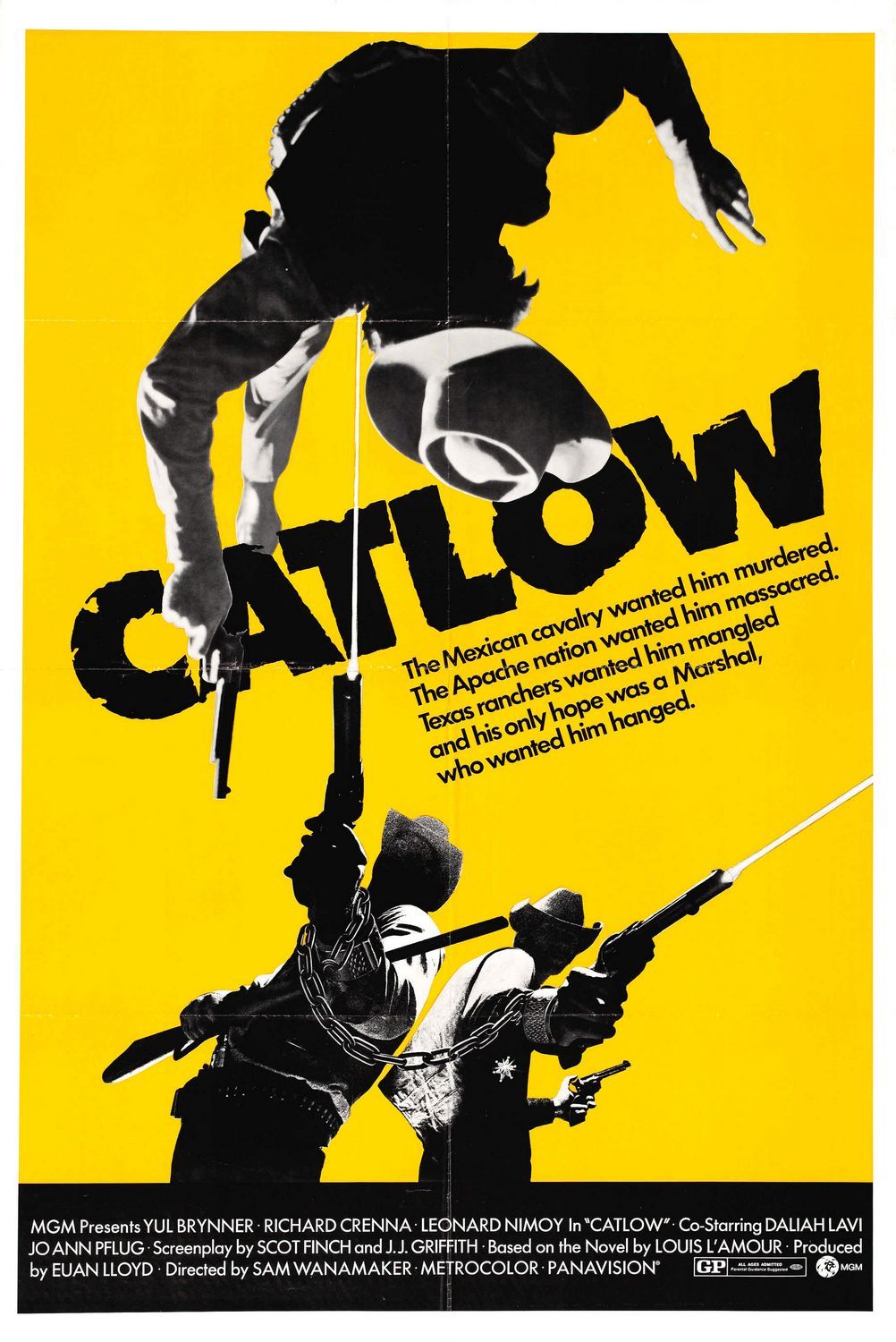 It’s time to look at an old western film. This one doesn’t take itself quite as seriously as the last few and sort of goes for a more classic LOTR adventure type feel instead. It works pretty well and this very nearly became the definitive western for me. Unfortunately it does fall into the animal violence trap by the end which was pretty unfortunate. Still, it does at least still succeed at being pretty entertaining from start to finish.

The film starts off with Marshall Cowan getting attacked by Indians. Just as he is about to be finished off his old friend Catlow shows up. It’s a mixed outcome for Cowan as he is glad to be saved of course, but Catlow is now a wanted man who has been stealing cattle and gold. Catlow’s defense is that he only steals unclaimed things which is true on a technical level, but the town is corrupt so Cowan still has to bring him in. They may have been the best of friends at one point, but right now their jobs are their top priority. This leads to both characters engaging in a back and forth fight where neither one will surrender. Catlow’s ultimate goal is to steal a massive shipment of gold so he can retire nicely while Cowan has to stop him. Meanwhile you have Miller who has a personal vendetta against Catlow and wants to end him. Who will come out on top?

I definitely liked the tone this film went for. The banter between the characters is great and they constantly get the other one to take a humiliating loss. Both Catlow and Cowan can hold their own scenes pretty easy. Even while threatening each other they manage to stay civil. At the same time, both of them are willing to push the trigger if it came down to that. There’s a lot of tension under the words they share which is interesting in itself. At the same time, they’ll also go out of their way to save the other. The film is filled with great moments like this and that’s why it’s a lot of fun. The film could have possibly gone on to be an 8 star title.

Alas, there are horses in this film as it’s a wild west. It’s always a red flag for me. There doesn’t necessarily have to be animal violence in these titles, but typically if you see a horse then you know what’s going to go down. In one of the fights with the Indians they specifically target the horses which was unfortunate. When that happens the film is destined to lose quite a few stars. It’s the number one mistake that most films make and this one was no exception. What makes it tragic is the fact that the film was solid otherwise.

As I mentioned, Catlow is pretty fun. He’s a smooth talker and is great at thinking outside the box. He handles the climax of the film exceptionally well as he gets to act like a sheriff. It was a pretty smooth move on his part. Meanwhile, Cowan may not have quite as sharp a wit as Catlow, but he is able to keep up pretty well. You don’t want to underestimate either one of these combatants. As for Miller, he’s a pretty fun main villain. I’d say his best scene is the first one he appears in. As with the main characters Miller does have a flair for the dramatic. He has fun toying with Catlow although he definitely did get pretty overconfident there and it cost him big time. Still a fun addition to the cast.

In that respect, Miller and Cowan continue to make the mistake of underestimating Catlow and his gang. They often have the thief on the ropes, but take so long gloating that he manages to get away. They seem to forget that he has a whole army of supporters backing him up. He’s also just got a bunch of connections like how every village seems to be under his thumb. I think it all goes back to his smooth talking ways. The lady with him also has a lot of influence. I do question how she managed to beat everyone to one village when they had such a huge head start, but that’s a head scratcher for another day.

There is one scene that really makes no sense though. It’s probably the one main moment that may throw off the immersion for you. Catlow and his gang infiltrate a kingdom and take down a huge chunk of the army one at a time. They wait until the sleepy soldiers are passing through a passageway and then lasso them. Catlow then knocks the guard out and they keep repeating this until they have them all. None of the guards think to yell and they all go down like chumps. Sure, they were sleepy and potentially drugged, but really? At first I thought the guards were all in on it, but they only pretended to be the main 2. The rest should have been able to do something. It’ll probably make you either chuckle or roll your eyes. As this film is mainly a comedy anyway I wouldn’t call it a negative. I don’t think the film meant for you to take it seriously anyway.

Overall, Catlow is definitely a very fun film. It’s probably the most enjoyable western that I’ve seen and the writing is absolutely on point. The main characters all do a great job at being entertaining when they’re on screen and the plot is sound. There’s really only one main negative here which is the animal violence and unfortunately it is absolutely killer. The film just couldn’t recover from this, but the important thing is that it came close. If you can stomach the horse stuff then this is definitely a film I’d recommend checking out. Otherwise check out a different one like Hang em High.