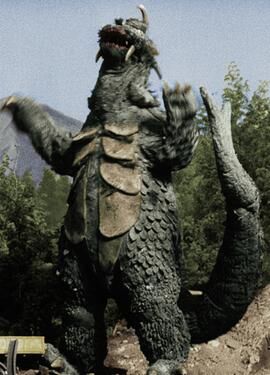 Suggested by Destroyer Gomess is a powerful Kaiju who has been through quite a lot. He can travel underground at high speeds although that won’t be necessary here. Cleveland Brown isn’t exactly powerful enough to force Gomess to use such tactics. All Gomess needs here is a few quick haymakers and the battle will be won. You simply can’t hope to stand up to a Kaiju like this. The gap in power is just too wide and ultimately that will always result in a decisive victory. Gomess wins.

Suggested by Destroyer Cleveland Brown is back but this won’t be for a win either. Ultimately there just isn’t anything he could really hope to do against a Kaiju like Jirass. Jirass can also fire off a powerful energy blast which would take out a very large radius. Cleveland Brown has nowhere that he could even try to run to escape such a blast. Durability won’t come into play either since he can’t hope to endure it either. No matter how you slice it, this is a complete win for Jirass. There’s just no getting around that. Jirass wins.

Cleveland Brown makes his debut on the blog, but he never really stood a chance against Ben 10! Ben 10 has taken many guys down in the past and he keeps on taking them down. They just couldn’t defeat him. Maybe Cleveland Brown will be back to fight someday. Ben 10 wins.