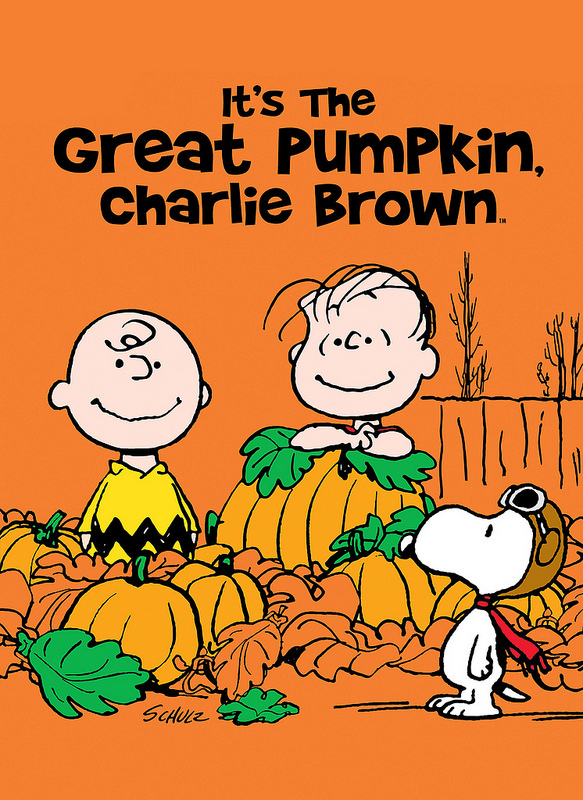 It’s time to check out the Halloween special for Charlie Brown. Slowly, but surely I’m closing in on the rest of the Peanut specials. They certainly came out with quite a lot of them though so it’ll be a while before they are all complete. This one is pretty good and I’d say that it is one of the better specials even if it can’t quite keep up with Thanksgiving or the Christmas special. Halloween never could keep up with those two holidays in general though, despite what Teen Titans Go would have you believe.

Linus believes that the great Pumpkin will visit his patch if he waits all night and believes. Sally decides to wait with him although she ultimately regrets it. Meanwhile, Lucy, Charlie Brown, and the other characters all decide to go trick or treating. It’s safe to say that Charlie’s group has the better time, even if things don’t go well for Charlie Brown. Lets face it, things never go well for Charlie. Luck is not on his side and getting rocks instead of candy must be pretty insulting. A third plot is about Snoopy taking on enemy fighters in his imagination. That Dog sure can fly!

You can tell that this is one of the older specials since some characters act a little differently than usual. For example, Charlie and Linus aren’t really close friends in this one. They hang out, but Charlie quickly attacks Linus verbally when he is talking to Sally since Charlie doesn’t trust the guy. Linus also doesn’t seem quite as smart since he has apparently been waiting in the patch every year for a while now and never saw the Great Pumpkin. I guess he made a little slip every year which caused him to still think that it was real, like doubting for a moment. Still, it is quite sad for him.

As for Charlie, his costume was pretty bad. I’m sure that he would have at least gotten some candy if he hadn’t made his costume a broken ghost. Just find a new bed sheet and cut in two holes, it’s not exactly rocket science! Charlie takes it all in stride though and actually doesn’t spend a lot of time complaining about how bad things are for him. Maybe this was before he got really jaded with humanity. Charlie’s plot was more fun than Linus’ even if it was shorter.

Snoopy’s plot is fairly standard as we’ve seen these Red Baron fights a few times before. I thought it was all right and the scene didn’t last too long so it doesn’t drag. I preferred Snoopy’s plot in the Thanksgiving special as he made himself a feast, but eating such a large meal for every holiday is a good way to put on the pounds and Snoopy has to stay fit.

The animation and soundtrack are roughly the same as always. The style works well enough for the Peanut specials and it isn’t that bad. Most of the alternatives would be better, but it is what it is. The soundtrack isn’t particularly memorable, but these specials are more about the dialogue than anything else. The writing is good so I have no complaints there. The special is also pretty short like the others as it is less than half an hour long. You’ll be breezing through this one.

Overall, It’s the Great Pumpkin is on the better half of most Charlie Brown specials. That being said, there’s no real reason to rewatch it when you could revisit the Thanksgiving or Christmas specials. It’s a fun enough story, but experiencing it once will probably be enough. I definitely do recommend it if you haven’t seen this special yet. On my quest to watch them all, I’ll eventually be seeing the Election Day special. Once that happens, I’m confident that it will beat this one and maybe even the Thanksgiving one as it soars up to the top of the ranks. It’s just hard to picture the Election Day one not being awesome. It’s such a cool concept for Charlie and the gang.