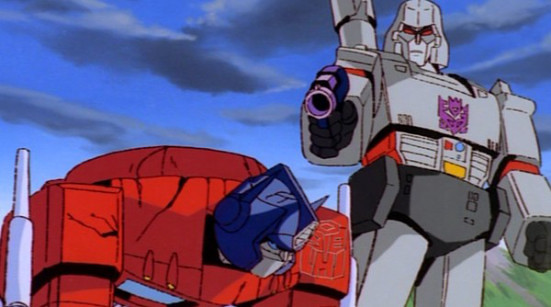 I now own the movie on Blu Ray. Still the ultimate Transformers experience!

It’s time for a classic Transformers review. I figured that it would be fitting to release it today since it’s the big 30th Anniversary for the series. Transformers Regeneration is really a homage to the original generation as they throw in a few modern twists. So far, the series has been pretty enjoyable and this is a pretty solid addition to the series. I would go as far as to say that this is really the definitive Transformers series right now since it really has everything. All of the main characters are here with tributes to various segments of the franchise. (I guess it’s still too early to say that it may surpass the original series, but it’s a very good modern adaption)

The plot mainly centers around Grimlock in this collection. He has been kidnapped by Scorponok to further the evil robot’s agenda. He agrees to release Grimlock if he helps him gain access to Cybertron to use a program that will switch the factions for all of the robots into the Decepticons. Grimlock’s part of the deal ensures that the other Dinobots will be healed and allowed to function normally again. Essentially, it’ll come down to sacrificing the planet in order to save 4-5 robots, but they are Grimlock’s friends so it’s a tough call. We also have two subplots. One of them follows Optimus Prime as he decides to stay on Earth to help with the rebuilding effort. His plot is mostly untouched, but it appears to be getting a bigger focus in the next volume.

We also have Rodimus Prime’s plot as he decides to find out what lurks in the depths of the planet. Actually, we have a third subplot in the form of Galvatron. Starscream leads him to an abandoned area where they notice that Shockwave has been sealed in there. Now, Galvatron has all that he needs in order to conquer Cybertron, but Starscream may have a hidden agenda. When doesn’t he have a hidden agenda right? So, a lot of things are definitely happening here, but the comic is mostly taking it one plot at a time.

As mentioned earlier, this was a pretty good way to continue the Regeneration series. It was definitely not quite as good as volume 1, but it was going to be extremely difficult to match that one. You have to realize that volume one was the climatic showdown between Megatron and Optimus Prime with only one of them walking away. This volume’s big fight is between Scorponok and Grimlock. It’s a great fight as well, but it would be impossible for that one to be quite as interesting. Prime and Megatron basically represent the Transformers franchise at this point and there fights are always incredible.

Luckily, this volume still holds its own. I really like the art in this series and it never lets me down. All of the character designs are very sleek and well drawn. They hold up for the action scenes and a lot of detail is added to the backgrounds. The art is easily some of the best in the biz and it may be second only to a few of the current DC comics in the market. (Superman Unbound, Justice League, etc. No Marvel comics come close right now I’m afraid) The art is just about perfect here and that always helps to give the comic and extra kick.

A true test of art is when the action scenes materialize and they all look very good. The action goes from page to page without error or delay and the actions are smoothly drawn. These are comic fights that you can get behind and the artist did a good job with Grimlock’s battle against Scorponok. We also get a lot of action in the comic that doesn’t necessarily have to be a one on one battle. Cybertron is under siege so there are a lot of explosions and beams that are flying around.

Grimlock definitely has it pretty tough in this volume. He gets kidnapped and then he is given a tough choice. Now, should Grimlock have decided to betray literally every Autobot on Cybertron to help the other Dinobots? Usually, I may be okay with that depending on the circumstances…maybe, but not really in this case. The Dinobots weren’t doing well, but Grimlock needs to trust that there is at least one Autobot doctor who can do what Scorponok can do. The Autobots medical knowledge is pretty embarrassing, but then it’s just time to search the solar system for a cure. It’s definitely out there somewhere and I’m confident that Grimlock could find it. Other than that, he’s a pretty good character and he makes sure to clean up after his mistakes. I’m not sure if I would want him to be the main character for too many comics, but once in a while is okay.

Scorponok is the main villain and it’s definitely a pretty big change of pace from Megatron and the others. His master plan is also pretty unique, but I’m sure that he would have been betrayed by one of the new Decepticons at some point anyway. He didn’t seem to really have complete control over them all and explosive switches at the ready can only help him so much. He likely trusted his power to keep him secure anyway, which isn’t a terrible plan. He is technically a lot stronger than most of the fighters who are still around. He makes for a pretty good villain and he is really trying to keep up his calm demeanor.

Soundwave only gets a quick scene where he is negotiating with another villain. Did I forget to mention this subplot? Well, Soundwave is gathering an army to destroy the Autobots once and for all! Galvatron and Starscream are in character for their cameos and likewise for Optimus Prime. Rodimus Prime has a brief journey into a secret room where he has to choose between the sword and the shield. It’s a classic symbolic choice and he also learns that his ancestors may have actually been pretty villainous as opposed to heroic. Rodimus makes the right call in sparing the inhabitants and defying the orders of the high above Transformer beings. Deciding to go on an adventure at such a bad time was a little tricky, but it’s technically not his fault. He still makes for a pretty good character, but he’s maybe a little one dimensional at the moment. We’ll see how he fares in the next volume. Most of the other characters don’t get a particularly large role so the main cast is rather small. Of course, a comic like Transformers always has a bunch of characters who are around. They just don’t get a huge role in this story.

There are two groups in this comic who respond to big acts with ungratefulness. I agreed with one of them and not with the other. The Dinobots were pretty bad at Grimlock for betraying Cybertron and attack him. I’m cool with that since it definitely looks very bad from their point of view. Should they have given him a chance to explain himself? Yes, I think they definitely could have been a little reasonable, but I can still understand why they are pretty upset. The humans…they’re a different story.

They’re mad because Earth has basically been wiped out and it’s really because the Autobots left Earth for so long like in the show. I never agreed with the Autobots’ decision to leave the planet to vulnerable and it was a big tactical error in judgment. Still, the Autobots did save them and now there are at least 50-500000 humans left on the Earth. If the Autobots had not shown up, the humans would have been completely decimated or converted into slaves. The humans respond by threatening the Autobots to leave peacefully or to be eradicated. Do the humans really think that they will be able to defeat the Decepticons without the heroes? Spike may have gotten some thunder abilities, but they would never be enough to take out any of the stronger fighters. He can beat the average Decepticon, but none of the named ones. The humans are upset, but they really need to think this through a little more.

The cliffhanger for the volume is pretty great! Let’s just say that Prime’s brief stint on Earth is likely over as he will have to join the fray once again. I’m hoping that his battle starts up quickly, but I wouldn’t mind if it ended up being the next arc. Prime’s already defeated one of the strongest Decepticons in the first volume so I’m ready for round 2!

If I had a slight negative, it would be the pacing of the volume. Usually I say that the pacing was too slow, but I would actually say that it’s too fast in this case. Cybertron is basically enslaved in the span of 2-3 pages and we are already jumped to the resistance movement. I would have liked to see the actual invasion a little more since that could have been really interesting. It’s not a big deal, but I think that part happened way too fast. Maybe everyone was just too hyped for the next arc.

Overall, Regeneration volume 2 continues to keep the series interesting and fun to read. It’s nice to see all of the old characters back and we have characters who are relevant to the original series and to Headmasters. I hope that Star Saber or God Ginrai appears at some point, but I know that they aren’t exactly the most popular characters in the shuffle so I can wait for a while. It could be a while until Regeneration Volume 3, but it’s safe to say that my expectations for it are pretty high. Now that the Grimlock plot is basically gone it’ll be interesting to see which one comes next. Galvatron’s, Soundwave’s, or Rodimus Prime’s. I’m personally hoping for Galvatron’s, but I guess we shall see. This is still The Transformers comic series to read if you want to become a fan of the franchise and it’s pretty new reader friendly since the designs are all pretty unique for the characters. You’ll have their names memorized in no time!