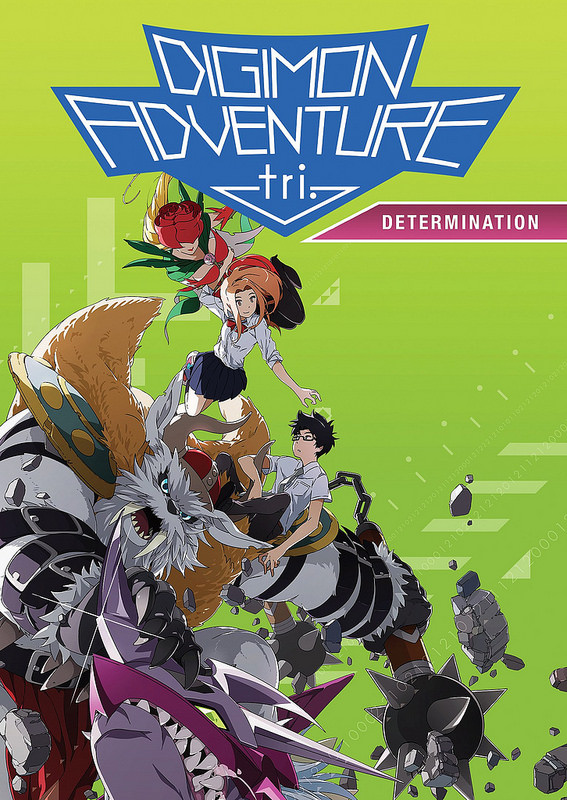 It’s time to look at the next Digimon Tri adventure. It’s been quite a while since we saw Alphamon handle Omnimon. Naturally this volume has a little tension between the main cast which is liable to stick around for the duration of the series. This one focuses on Joe and Mimi’s struggles while the others try to just have a good time without worrying about the fate of the planet for a little while.

After Tai held back against Alphamon and caused the heroes to almost be destroyed he has lost his competitive spirit altogether. He doesn’t even want to confront Matt about this since he isn’t even sure how to word his argument. The Digidestined decide to distract themselves by throwing a party at school. Still, ready or not the Digimon aren’t about to wait for the heroes. Ogremon surfaces and the infection rate in the Digimon World is growing rapidly. What was thought to be a natural disease may in fact be all part of a master plan.

As I mentioned Mimi and Joe are the main characters here so let’s talk about them. First we have Mimi. She’s always been very outgoing and while she used to be more fashionable than practical she has also developed a tough personality. That said, she has started to intimidate her classmates who decide to sabotage her school party idea by not participating. Mimi’s teammates also reprimand her for trying to fight off one of the evil Digimon on her own.

For the first issue, I wasn’t a fan of the costume that Mimi wanted to use for the dances and it’s reasonable to assume that not every student would be comfortable wearing it either. We find out that Mimi never asked anyone about wearing it beforehand either so she was a little short sighted there. Of course, the students didn’t have to immediately turn this into a fight so they were being confrontational for no apparent reason. Mimi maybe took it a little harder than she she should have but she did cause that issue.

As for fighting on her own, she definitely made the right call there. The others told her to wait for backup but what about in the meantime? Ogremon wasn’t going to wait and he could have caused a lot of damage on the meantime. Also, backup never even came since the cops stopped the kids before they could get through. The chopper getting hit by the needles was just being careless. Mimi probably should have seen it but I wouldn’t put any blame on her then. If a villain is attacking you definitely don’t have time to wait for backup. That’s when you’ve gotta step up and show why you are a hero. Long story short, Mimi’s obstacle here is that she is very confident and impulsive which are both fine traits and she is certainly doing well.

As for Joe, I can’t say that things are going very well for him. Throughout the film he decides to ignore everyone being in danger so he can keep on studying. There usually isn’t anything wrong with hitting the books but when it comes at the expense of putting your friends in danger then that’s when it has definitely gone too far. He may not like the hand that he was dealt but the fact remains that Joe is one of the only people who can defend the world from the infected. He has to step up to the plate. He finally does by the end which is good since I had enough of his moping. Debatably the worst part is that he knows he is to blame for most of the film but keeps on making the wrong choices anyway.

The film ends with a pretty solid cliffhanger to get you hyped for the 3rd film. It’s gonna be hard for any of the films to top the ending was it was just perfect. It helps establish the threat and leaves the heroes in a bad spot. Considering that this series is a 6 part epic, it’s always good to have a stinger like that. I didn’t elaborate on most of the other characters, but they’ll all get their moments coming up in the future films so I’ll look at them in more detail when it’s their turn. Naturally the final review in the series will likely be the biggest as I’ll wait until then to discuss the route the series went and if it addressed all of its different plot lines. I do like how mysterious the series is acting right now, but we are certainly going to need a solid payoff to keep up with that.

As expected the animation is pretty solid. The fight scenes are on point and it’s always nice to see the Digimon cut loose at the end since for the most part they don’t get too much action here. Once in a while the human characters tend to have a derpy look on their face when chatting but that’s likely a stylistic choice. I’ll still take the bold and colorful art style of the actual show over it but I have no real faults with this style.

The soundtrack is mainly the same as the first one and is as solid now as it was then. The danger theme that pops up in the climax of this film as well as the last one is still the best one in the film. It does a good job of making the atmosphere more tense and epic. I also still do like the Tri into theme which is a techno version of the original. The Digievolution theme is iconic and I’m sure fans are glad they kept the original but I’d sure love to see the English version here. That theme was awesome!

Digimon Tri is more about the plot and drama than the action so as mentioned earlier there isn’t much fighting here. Fortunately the writing is on point so that isn’t really a concern. I do think it may make the film a tad bit trickier on re-watches, but for initial viewing you’re definitely going to be caught up on the suspense. At the end of the day most of the main characters are likable which is also helpful. Currently Tai, Joe, and Izzy are probably having the toughest time of it, but they’ll have their time to get more screen time. Well, Tai and Izzy at least. Joe already got his moment, but it seems to have ended the part of his character arc that I didn’t like so he can only go up from here. I’m definitely ready to see the heroes take on Alphamon again now that they have their fighting spirit back.

Overall, Tri part 2 is pretty solid. It’s a fun movie that doesn’t really do anything wrong. I may disagree to an extent with how the characters judge some of their decisions (It was good Mimi jumped in) but the film never gets heavy handed with trying to get you to agree. You’re left to decide for yourself if the character made the right call and I’m certainly all for that. I’d definitely recommend checking this movie out. Of course, you should probably watch the first film to get a better handle on what’s happening here. As this is a direct sequel there really isn’t any way around that. In this film it is literally a part 2 that starts off right after part 1 soooo…go watch part 1 first.