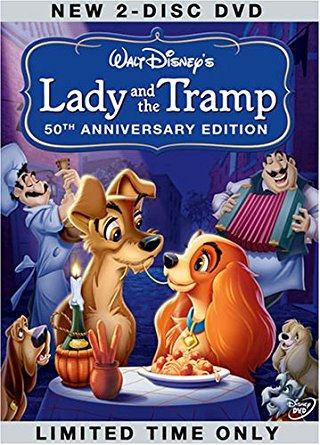 It’s time to take a look at the Lady and the Tramp. It’s definitely a well known film that I’m sure a lot of us have heard of. It’s about two dogs so what could go wrong….uh oh. There’s no real animal violence here as the film stays classy in that regard but unfortunately the movie is just really mean spirited which ultimately holds it back quite a bit.

The film starts with two jerks deciding to get a dog. They buy Lady and right away Mr. Jerk decides that the dog will have to sleep in a dark room by herself as he closes the door. Lady keeps trying to break out and keep them up until finally they reluctantly relent and let her on the bed. Jerk complains about all of this nonstop and is just a terrible character in case you haven’t noticed. Well, one things leads to another and Heartless decides to have a baby. Jerk and Heartless decide that they don’t even want to have Lady around anymore and completely ignore her every action. It’s as if she isn’t even around anymore at this point.

Then the baby is born and the irresponsible parents decide they’ve had enough of the responsibility and leave the country for a few days. They decide to have Aunt Harriett watch over the baby. As the aunt is allergic to dogs and owns two cats, it is reasonable to assume that they told her to just watch over the baby and to ignore the dog. Lady does her best to watch over the baby, goldfish, and the bird but then she is kicked out of the house and given a muzzle. She meets up with a dog named Tramp who agrees to help her and aims to elfurther show that living as a free dog is preferable to being leashed. Will Lady agree?

It’s not a bad premise if these were human characters that we were talking about since nobody cares about those guys quite as much. When it comes to a film about dogs though, the film can’t be this mean spirited. It’s just hard to watch the film during the majority of these scenes as the owners are just so terrible. I’m not even sure if you’re supposed to actively dislike Jerk and Heartless or if you are supposed to simply feel bad for Lady but either way I did both. The owners do far too much for you to simply forgive and forget as the film wants you to by the end. You can’t even play the whole “It was a misunderstanding” card since they were very intentional with how they would ignore her.

Then you’ve also got the Aunt who would have murdered the other pets by proxy if not for Lady and she gets absolutely no punishment for any of this. In fact, she sends dog food at the end so I guess they are all suddenly friends now right? Ignorance is bliss or so they say so I guess the parents here should be on cloud 9 all the time. It’s not even as if the scenes are all that long, but they are certainly long enough for me to really dislike everybody involved from the humans. There actually aren’t any good human characters now that I think about it.

The good parts of the film are when Tramp is showing Lady around with his elaborate setup. In those moments it actually feels like the fun movie you would have expected going into it. Tramp has a lot of fine dining spots and everyone seems to like the guy. It also shows that not all of the humans are really bad people in this area, just most of them. Tramp even goes out of his way to help out other dogs in need so while he is a solo act, Tramp does try to help the community around him.

The scenes at the Pound can be a bit much though. Seeing the dogs get led out where we never see them again was rather dark. I was hoping for a slight fake out as we then see a happy family walking off with the dog, showing that they were being rescued, but the dogs just didn’t know about it. Still, on its own the pound stuff wouldn’t be enough to hurt the film all that much but all of this just begins to add up.

As far as the supporting characters go, I liked the dog with the scottish accent. He was always ready for a fight and did his best to watch over Lady along with the ex fugitive hunter dog. The old dog’s ramblings could drag on a little, but he was still a decent character for the most part. He helped out quite a bit and the film handled the ending well as the film almost lost another star with how his plot would have concluded. As it stands, the ending was pretty good. In general, the film got a lot better once we entered the climax of the movie. It couldn’t quite save the first half of the film, but at least it gives us some hope for the sequel.

The animation is pretty good as you would expect. All of the character designs are on point and the animation in general is very smooth. We also get some nice action scenes thrown in for good measure like Tramp against 3 dogs or Tramp against the Rat. I wasn’t expecting any action scenes so that was a welcome surprise. They were also handled very well as they managed not to even fall into the unfortunate animal violence trap. Another reason why it’s always best to be animated rather than live action for these as it is tougher to pull off there. The rat put up a much better fight against the dog than I was expecting to be honest, but we all knew who would come out on top in the end. Winning a 3 on 1 fight early on was the really impressive moment. If not for Tramp’s iffy backstory that was completely glossed over, he would easily be the best character in the film.

Overall, The Lady and the Tramp is a bad movie. I was definitely triggered while watching it and Lady deserved better owners. They really overdid it with how mean the owners were as there was just no turning back for them by the end. The animation is solid and we got some fun fight scenes with snappy dialogue but it is all erased by the pesky humans. Maybe the sequel will end up being better since the humans theoretically shouldn’t regress with their character development. Anyway, you are better off watching Air Bud or Underdog than this film. Those have more heart and don’t get quite as tragic.