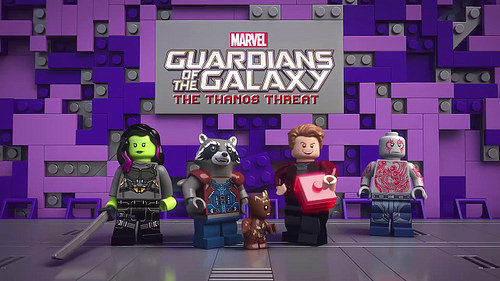 I always try to grab a poster or a picture that has the title in some form, but that wasn’t really possible this time. (*Possible = Quick Google Search) The image that I did grab was still pretty neat though. The Lego craze continues and it’s a fad that I much prefer to the stop motion from back in the day so I’m cool with it. Lego films don’t have the highest amount of replay value out there and they tend to reuse jokes after a while, but they’re always fun the first time around and this one was handled well. Lego’s leave little room for hype moments, but that’s not the point of Legos anyway. This ended up being a solid Lego adventure and one of Marvel’s better ones. (Wait a sec, how many Marvel Lego adventures are there anyway?….)

The Avengers were getting ready for a nice party when Iron Man’s suit is hacked by Ultron! Locked into his suit, Tony can only watch as Ultron tries to humiliate the Avengers by messing up their party. The Avengers will have to think quickly if they want to win this round. Ultron’s army of droids are not going to be easy to defeat and the Avengers are forced to call in a little help to deal with the menace. The Avengers roster has been strengthened with the addition of Vision, but the twins are nowhere to be found. Perhaps for the next special although Scarlet Witch may be the only one to join due to Quicksilver’s ending.

I have to say that Captain America definitely stole the show here. He made a lot of good puns about Ant Man throughout the film. The other characters would always grimace and wince, but that just made it all the better when Captain America would continue. He was unfazed by the reactions of his partners and rightfully so. When others doubt your puns, that doesn’t mean that they are bad. I thought that they were quite clever and he was easily the best character in the entire film. He did a good job during the fights as well.

This short is a comedy first and foremost of course even though there are some quick action scenes. The fights are enjoyable and there are a lot of homages to the actual film. This was to be expected of course and it’s always interesting to see how closely the Legos can emulate the style of the original film. Hawkeye’s costume is barely trying to emulate the film style though as it really stands out with all of the red coloring. It’s hard to totally see what the film was going for, but I actually did like the style though.

We even get some guest stars to show that this is in the same continuity as the Ultimate Spider Man show. Spiderman and Iron Spider arrive to turn the tides and let the heroes know what is going on. They’re left behind so the role is definitely a very small one, but it’s always nice to have a cameo from our favorite wall crawling superhero! There’s not a whole lot more to say about the characters. They’re all in character and slightly more comedycized (New word now folks!) like in Teen Titans Go, but not over the top to the point where the characters would not be likable.

I’m definitely ready for a DC vs Marvel Lego adventure at this point. The possibilities would be endless and I could finally have Batman and Superman defeat their Marvel counterparts. I could almost see Iron Man being the one to fight Batman since the MCU has made him really popular, but either way, DC should take the fight. They’ve always been portrayed as the stronger verse in my eyes and seeing them get some credit would be fun. Even if it’s just a comedy adventure, I could see both sides getting some decent Lego fights in there and the format would also mean that Superman wouldn’t need to hold back! If he broke his opponent, it would just be accompanied by a pun after all.

If I have a complaint for this adventure, it’s just the same complaint that I have with basically all Lego films. A lot of the jokes you’ll see a few miles away and they tend to not actually be that funny. I typically won’t laugh at any of the jokes, but I tend to not laugh at most jokes so it’s not saying much. It’s fairly enjoyable, but I’m still not a fan of Lego animation either and it does prevent the specials from having any real fight scenes. Again, it’s more a complaint for the format than anything and watching this is still a nice way to spend 20 minutes.

Overall, The special is pretty fun. It makes for a fun little watch and that’s why there’s not much to say about it. To an extent, it’s like reviewing an episode, which is why I don’t do that. It would be hard to elaborate an awful lot about it and even then, the average episode has more content to be discussed than a Lego film since the Lego adventure is just a quick battle without the extra layers of characters and plot. It works well for what it is and I still say that this is a fairly solid Lego adventure. It inflates the Marvel animation count and that’s what counts in the end. I recommend checking this out and you can watch it while cooking lunch instead of having a conventional timer.