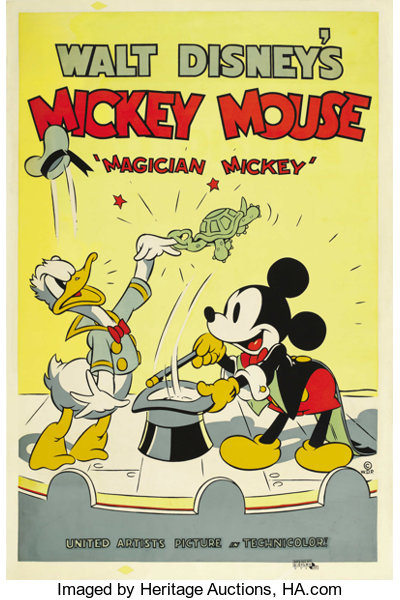 It’s time to look at a very quick Disney short. Now, most of these old shorts were quite…short, but this one really takes the cake. It’s listed as 8 minutes online, but it seemed to only be about 2-3 minutes while watching it. Maybe the special was just that good, but it does seem like the shortest of all the Disney shorts and that is actually pretty impressive. There are really only 2 main characters here, Donald and Mickey. Naturally they are on opposing sides here as you might expect.

The film starts off with Mickey performing some tricks on stage. He is a magician and not simply one who uses parlor tricks to get by. Mickey knows real magic so I assume this is in the same continuity as that other special where Mickey was learning spells under the tutelage of that random magician. Unfortunately Donald isn’t a fan of Mickey’s act and decides to sabotage the mouse. Mickey doesn’t really like confrontation so he avoids Donald for a little while, but eventually he decides to put the duck in his place. Sparks fly and both characters really get into it. There is a winner here though as the special doesn’t end on a cop out.

It’s a fun enough short. I like seeing this more confident version of Mickey. He isn’t about to let Donald just get his way without a fight. Still, Mickey is a professional so he tries to end the situation in a way that is still entertaining to his captive audience. I have to admit that this is one of his best appearances in the various Disney shorts. Then we have Donald who is pretty fun as always. He is definitely the antagonist here, I don’t think there can be any doubt on that fact. Still, while Donald is unreasonable he is still entertaining as you would expect. He’ll definitely give you flashbacks to any hecklers you may have faced in showbiz. They can’t be pleased and they won’t be silenced. All you can do is listen to them and wait for an opening to use your next act. Of course once the heckler gets violent as Donald did then you can be all set to use your skills to wow the crowd and stop this disruption.

The animation looks pretty smooth as always. I like the character designs here and the stage looks pretty nice. There was definitely a lot of care that went into this. There isn’t much of a soundtrack, but I suppose you wouldn’t reasonably expect one here. On a technical level this special delivered just as well as it did with the writing and the characters. It’s a solid short from whatever angle you decide to look at it from.

Overall, Magician Mickey is a nice short to watch while you polishing off an afternoon snack. It’s the perfect amount of time for that and it’ll feel pretty nostalgic. There’s nothing wrong with the special and it only takes a few minutes to watch so why wouldn’t you take the plunge? Because it is so short I don’t think it will wind up being one of your favorites or anything like that, but I’ll still give the short some props for doing a good amount in its limited time frame. We’ll see if any upcoming short can hope to match this one.