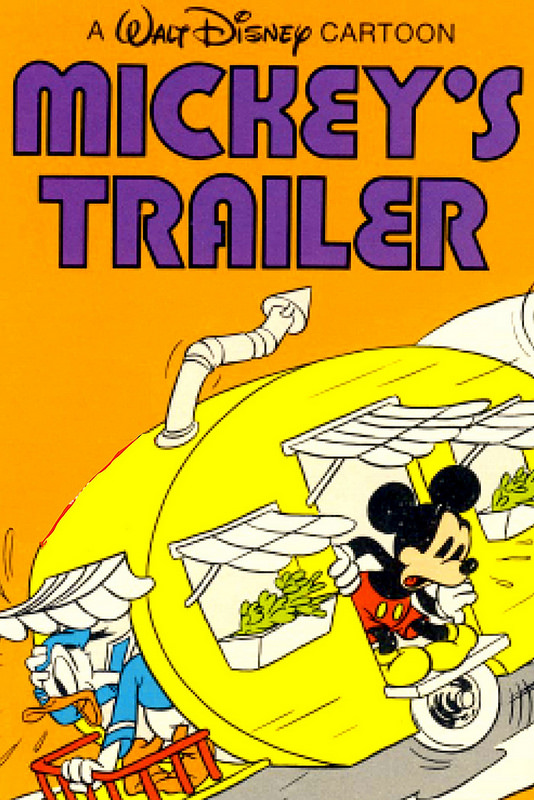 It’s been a while since I’ve seen one of the old Disney shorts. The Donald ones are typically the best but the team up ones are right up there as well since who doesn’t like an ensemble cast? Mickey and Donald have enlisted the aid of Goofy to travel somewhere far away. I assume they are going somewhere to deliver supplies or something. Goofy assures them that he can get the duo there in one piece and so begins their adventure. The Trailer is rather high tech as the click of a button can transform the rooms into just about anything. Of course, this can also be dangerous as Donald finds out the hard way. You could be relaxing as you finish off your dinner only for the table to suddenly turn into a bathtub instead of vice versa. Perhaps the tech has simply gone too far in this case.

On the other hand, some tech could have been useful later on when the trailer is unlatched from the car and the heroes go flying. If they had an electronic lock perhaps they would have been okay. I think it’s safe to say that Mickey played the biggest role in causing this to happen though. He forgot that Goofy was driving the car and later on Mickey was also the one who kicked the trailer away by mistake. The heroes probably shouldn’t have made lunch so early either though so that was on them. Of course the driver would want a bite to eat as well. At least wait until a lunch break or something. Goofy didn’t ask for this and he still managed to drive them safely back to base. Now that’s what I call a top notch driver.

Mickey’s role is a little small next to the others but we do get to see his solid soccer skills in time for the Word Cup. He kicked the Corn with precision and power into the pot. Meanwhile Donald does his best to cope with this place but it’s rough since nothing seems to work right for him. Donald never gives up though. Goofy is the one to feel bad for since the whole thing is hardly his fault. After all, why would you serve breakfast when you know that the journey is still on?

The animation is smooth and consistent as Disney always was back in the day. Everything is very clear and the character models are on point. Everything moves very quickly so I can only imagine how many frames it probably took to make. A lot of effort was put into this one for sure.

Overall, This was a pretty fun special. Naturally there is only so much that you can do in a few minutes but it’s an entertaining experience. Goofy gets a happy ending which is happy for his fans since that seems to be a rather rare occurrence for him. Driving the trailer for so long is definitely tough so he earned this one. If you like the classic Disney specials or just enjoy a light hearted comedy then you’ll enjoy this one. Either way it is only an investment of a few minutes.