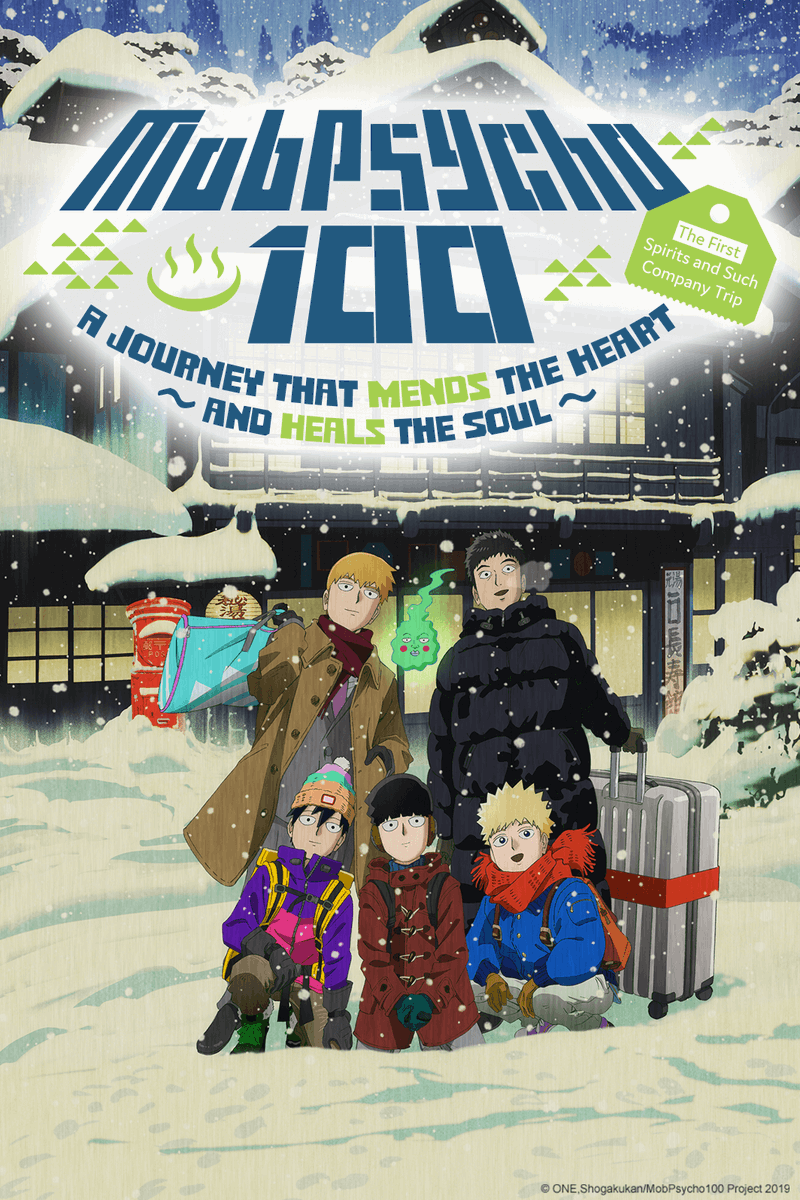 It’s time to look at a quick Mob Psycho OVA from a while back. It’s always fun to see the gang return and hopefully we get a proper sequel at some point. This one gathers the characters in a new environment and Reigen gets to be the main character so you can’t really top that. The new villain even gets quite a bit of hype. It’s a reasonably sized special at around half n hour so you’ve got time to have some fun here. It’s really a good chance to hang out with the cast in a fun environment.

The special starts with a lady showing up and asking Reigen for help. Her inn is being haunted as travelers who attempt to go there fall into another dimension during the trip. As a result the Inn is losing business and she has also grown rather ill. Reigen figures this is probably fake, but the lady agrees to pay for the trip and all expenses so he agrees to help. Serizawa is now a member of the team and Reigen also invites Ritsu and Teruki in addition to his partner Mob. They all get on the train but after dozing off, Reigen awakens to find that only Serizawa remains. Not only are the other characters gone but they seem to be trapped in the car. Whenever Reigen attempts to leave he ends up right back where he started in a loop. He is clearly getting nowhere fast and that’s starting to worry him. Still, he has to keep a brave face on in front of Serizawa. How long can Reigen keep the two of them alive?

As always Reigen is in over his head on this one but I always like how he is able to fake his way through it all. He doesn’t know that everyone else escaped because of their psychic powers so he’s just doing his best to think things through rationally. Throughout it all he still has the drive to save half of the food for Serizawa despite starving to death. At his core Reigen’s still a good guy as always. He’s one of those interesting characters that you can count on for the big stuff although he will cheat you in the smaller ways. It makes for a pretty unique character trait if you ask me. You don’t really see a whole lot of characters who are quite like that.

Reigen’s also just a lot of fun and is a big part of why the adventures are so enjoyable. He’s always quick to double down on his deceptions and just doesn’t give an inch no matter what. It’s really quite impressive when you think about it. You also feel bad for him as the others are never around when he needs them. A big example of this is when he’s ready to have a pillow fight near the end since he was just sleeping for days and nobody wanted to do it. They tend to leave him high and dry all the time which is pretty unfortunate.

Meanwhile Serizawa gets a pretty big role here too as he’s nervous about working for Reigen. His whole character has always been that he gets extremely nervous in all scenarios so you can’t really blame him. Part of why Reigen is so endearing is because he’s ready to help out in times like this and does his best to help Serizawa regain his confidence. Mob and the others don’t get much of a role although they quickly help out a bit in the final fight. I thought this made the villain look good since he was able to survive a hit that was launched by the whole gang of Espers all teaming up. You have to admit that not just any villain can do that. I don’t think it’s meant to be a serious feat and just an excuse for some action here but we take those.

The animation looks solid. The style naturally means it won’t touch most of the other current animations right now, but at this point I’m pretty used to it. The colors look solid for the energy blasts too. The soundtrack is taken from the show and works out pretty well here. As the OVA isn’t long the pacing is also pretty tight with the plot moving from part A to B without any issues. This is just a fun journey and one that you’ll definitely have fun with. At the end of the day this is the kind of plot that would work with almost any series. A lot of the time I think it would be fun if we could hang out with the characters a little more after the main story is done and this is definitely one way that you could do it.

Overall, I’m not going to repeat that long name, but this Mob Psycho OVA is quite good. It’s a good reminder that you don’t always need to have a super big climax filled with tons of explosions to make for an epic adventure. Sometimes all you need is just a nice scenario to have the gang back together with some fun dialogue. As expected Mob Psycho delivers on that. It’s a very fun adventure that will really breeze right past you. I’d definitely recommend checking it out and it’s the kind of title that needs no context. If you haven’t jumped into Mob Psycho yet but have been thinking about it then this may be a pretty good way for you to start.