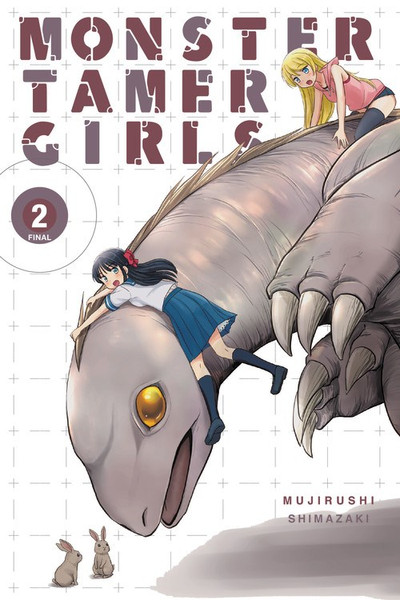 It’s time to look at a very obscure manga. I’d definitely not heard of this one before and as it was only 2 volumes it’s definitely not one that you will likely see in stores much. It’s definitely an interesting take on the monster genre. It’s sort of a mix between Yotsuba and Go Go Monster. While I can’t say that this manga was all that interesting there was certainly nothing wrong with it either. It’s a good way to spend some time, but at the end of the day it’s a manga I would recommend reading for free at the library as opposed to buying it.

The manga takes place in a world where Kaiju are now commonplace. They are numerous and run around across the planet. Fortunately they are all basically mindless but the bad side of this is that they cause trouble without meaning to. As a result the world has started opening up schools for kids to train on how to tame these creatures. The Tamers will take the Kaiju to safe spaces where they can relax without disturbing people. That’s the way it’s always been and how it must remain in order to build a stable society. The manga follows the adventures of 2 girls who are tamers in training. They’ll soon learn that this job is easier than it looks.

There’s not really much of a plot once you get beyond the initial synopsis which I dare say is a problem. So many cool things you can do with a Kaiju defense force! Most of the manga is introducing you to the cast and then by that point the series is basically over. There are several main humans, but only one main Kaiju who is around for the whole adventure. His name is Blue and he’s a huge Kaiju who just wants a friend. The Monster tamers are fortunate to have him as he helps give them a boost when needed. He definitely makes travelling a lot more convenient for sure.

There are 4 main characters with 2 supporting ones thrown in there. One of these characters is Koto. She is a professional but doesn’t care much for the monsters. She thinks they’re all mindless and the job seems to bore her, but by the end she learns that the monsters have a little heart at least. Then there is Sora who is the co-main character along with Ion. Sora likes messing around and hitting people with the water horse while Ion is just focused on being the best tamer she can be. Tsukiko is the quiet one who doesn’t like to admit that she likes the Kaiju. She has a reputation to uphold after all and she’s always been proud of it. Still, pride comes before a fall and eventually she learns to play nice with the monsters.

None of the characters are bad, however there isn’t much to any of them. They’re all just going through the motions and enjoying their daily adventures, but nothing really comes of this. They get some basic character development like Tsukiko learning to be more open, but that’s about it. There’s really no time for anything else. Length isn’t an issue as you can have a great series in 2 volumes, but I think this is one title that could have used a bit more time. As it stands it is over before you can properly identify with any of the characters and that’s a bit of a problem.

The art is pretty solid, but the problem that the artist has is how similar all of the characters look. It’s easy to mix up Sora and Ion as well as Koto and another one of the characters. Some characters share the same hairstyles and others share the same personalities. Their ages are all pretty close as well so after a while you’ll just find yourself mixing them up. I had to dig up one of the volumes just to remind myself of their names.

I think one thing that could have added some more interesting elements to the story would have been to have some actual monster action in the series. I don’t think that would be unreasonable as surely some of the monsters would try attacking the planet right? The series hints at this and develops a world that should have many interesting elements, but we are stuck at the school with the nice monsters the whole time. You’ll very quickly find yourself wishing to see the outside world. The closest thing we get to these discussions is one kick from Blue to another Kaiju, a flashback where there’s some kind of battle going on and a Kaiju saves someone from a burning window, and a ghost. Beyond that the series is mainly just the kids learning how to feed animals and have fun.

Overall, Monster Tamer Girls isn’t exactly for me. I dare say that Yotsuba has a little more depth and excitement contained within. You really need some sort of gimmick to take the manga to the next level. A slice of life series can live on for quite some time with a good character cast, but you need them to have real personalities. You don’t really get that vibe from this series and even the monster designs aren’t all that great. This doesn’t leave you with a whole lot of options and as a result I’ve got to give this one a middle grade. I wouldn’t say to stick away from it, but I would hardly recommend it either. It’s a manga where you’ll finish it and not have much of an opinion on it. The series isn’t hurting anyone, but you could always find something else to read.