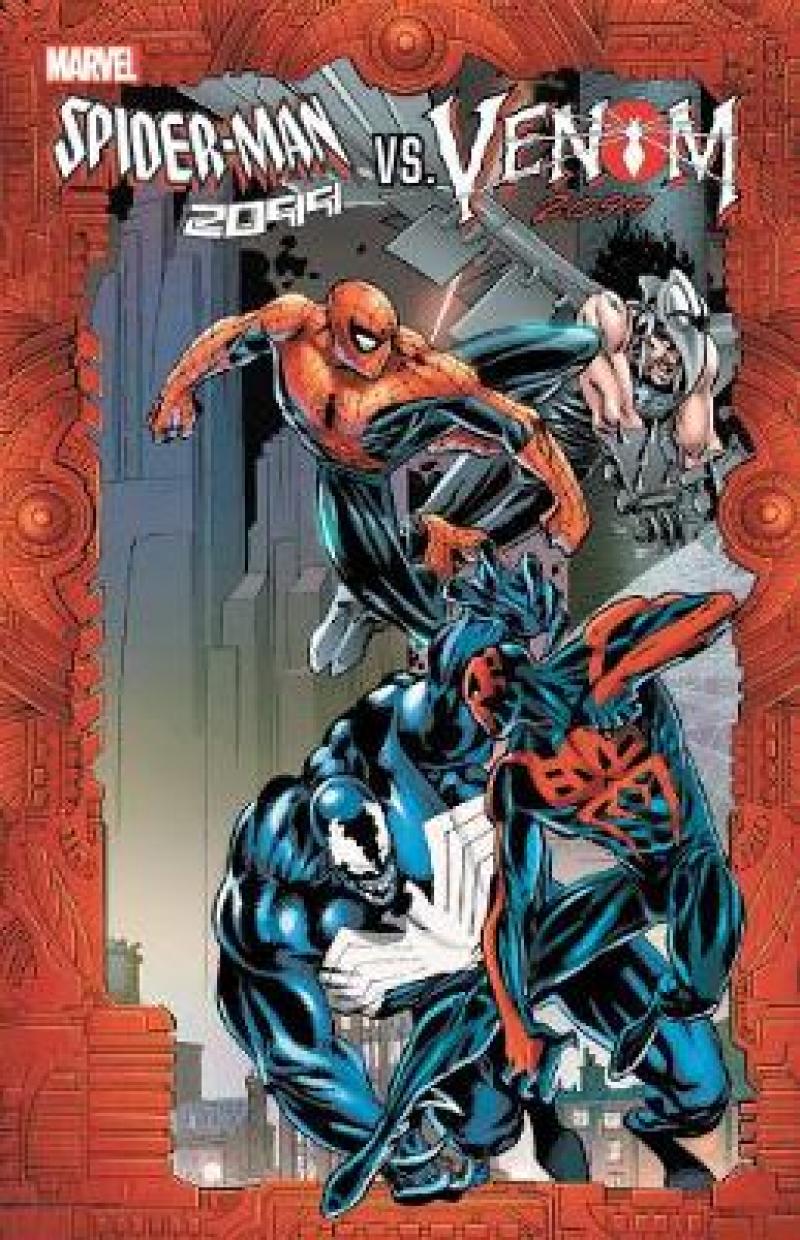 I haven’t read a whole lot of Spiderman 2099 over the years. I mainly just know him from the video games and comics but he always seemed like a pretty good guy. Definitely had a pretty neat costume which stood out. This comic was very enlightening in that Spiderman 2099’s actually not a good guy. He certainly didn’t inherit Peter’s morals that’s for sure and once the big twist occurs in the final arc it’s unlikely that his character will be able to bounce back from this.

The first comic is the main crossover and unfortunately that means you won’t see Peter again after this opening issue. Still, it’s a fun team up. Basically Peter suddenly finds himself in the year 2099 while Miguel appears in the modern day. Both of them need to find a way back to their own times and quickly although both of them seem to prefer the other location a bit. We get to see Vulture 2099 and classic Venom which was fun. The two Spidermen don’t actually get to fight each other here this time though.

It’s always fun seeing Peter and if anything you wish he could have stuck around a bit. He definitely holds up as a very solid main character and I wonder what was going on in his universe at the time. He definitely has no trouble taking down Spiderman 2099’s opponents and why would he? Peter’s got decades of combat experience up his sleeve which helps out quite a bit in fights like this. If anything the only part of the story that doesn’t make sense is how Venom gets easily taken out by 2099 in a few good hits. You can argue that he was not knocked out and just chose not to continue his pursuit but I find that pretty hard to buy. He just lost real quick since the comic was almost over but for that they probably shouldn’t have even had him appear.

In the main comics we’ve got quite a few plots going around. One of the main ones involves Alchemax. They’ve finally got a new head who turns out to be a future version of Dr Doom. He has quickly begun to reshape the image of the company. Surprisingly for the better as his methods aren’t quite as draconian as the previous leader’s methods. Doom doesn’t bother with destroying mobs or hunting Spider-Man. He’s focused on the bigger picture. In fact, he’s even offered to recruit 2099 to the force although the hero hasn’t decided yet. The offer expires after 48 hours and then things will really begin to change. Meanwhile Miguel has been promoted to one of the highest positions in the company. Now he can really help make the company a good one, but will he find himself corrupted in the process?

The new status quo has just started and there’s a whole lot they can do with this so it’ll be interesting to see how things shake out. Meanwhile we also have the debut of Venom 2099 who’s off to a good start. This guy’s definitely got a crazy design and an impressive power set. It’s fair to say that 2099 is weaker than the original Spiderman but this Venom could possibly hold his own with the original. His acidic powers are pretty great and he’s also got a solid amount of regeneration. Right now 2099 seems completely outmatched against this monster although the sound weakness is a good way to turn the tides. He better make sure he continues to play this smart though because if he messes up the timing even once then it’s all over. The volume ends with a big stinger as Miguel finds out who he is really up against.

The volume doesn’t say who it is, but my theory is that it’s actually his brother Gabriel. This is where we segway into why Miguel’s not a good character. So it turns out that Dana was with Gabriel but still decided to cheat with Miguel behind his back. While Dana also shares equally in the blame, there’s no way you can let Miguel off the hook on here. Not only was he knowingly being involved in a cheating affair but it was involving his own brother. I don’t blame Gabriel for not wanting anything to do with Miguel after that. Miguel mentions quite a bit how his family is quite fractured with his mother being an alchoholic and his father being a super corrupt business man, but Miguel is no different now. Then he rebounds with Xina afterwards or during. The timeline got a little tricky there. Either way one of them doesn’t live through this volume which will make Miguel’s decision pretty easy. It doesn’t make him a better character in the slightest though.

So that hurts the cast of heroes. Really there isn’t a hero to root for. Gabriel seems reasonable in his short comics that we see between issues but he’s not doing so well in the main ones either. If anything Miguel’s boss at Alchemax might be the best character. Miguel really doesn’t like him but the guy does his best to make sure people at the company are safe. At least he’s doing his job right? Doom is also very solid although I would still consider him to be a villain. He may be acting heroic now…but it’s Doom. He’ll show his true colors soon enough.

Miguel might be a disappointment but it doesn’t really hurt the actual comic. One thing I’ve always enjoyed about the Spider-Man comics is how there can be so many different plots moving all at once. The only other story where you tend to see that is with some of the classic X-Men comics. This also occurs in Spider-Man 2099. There is just so much happening in every issue. I always say the more the better. Why stick to one plot when you can have 5? The writing is solid here as well with a lot of interesting dialogue between the characters. The future world makes for a pretty unique backdrop as well. This future is definitely quite different from a lot of the others we’ve seen. It may be a bit on the corrupt side but it’s not nearly as crazy as some other timelines.

The art is solid. It’s got a very bold style so the panels really jump at you. The action scenes are solid and the comic as a whole is easy to read. The font is the right size and I definitely enjoyed this era of comic art. In general I’m not too hard to please in this area. So long as you’ve got striking colors and the proportions are right then I’d say you’re in pretty good shape. It’s important for a comic to have good art as well so you can just read it through.

Overall, It’s definitely fun seeing the 2099 era. During the crossover we see someone from 3999 which also looks interesting. I have a lot of questions on how the Goblin is the big force nowadays. I suppose if the heroes took him out they would have changed that world quite a bit. I already have questions for 2099 as it is like how all of the heroes got taken out of the picture. People still worship Thor and I presume he is alive somewhere in Asgard. With all of the comic events since then I doubt the 2099 timeline will ever come close to coming to pass in 616 but other Earths are fair game. The more possible futures the better because it’s fun to see how things could have been. If you’re up for a solid action/adventure title then I definitely recommend this one. The dynamic of having Miguel as the corporate leader now is bound to be fun and Venom’s definitely the biggest threat I’ve seen 2099 have to deal with.