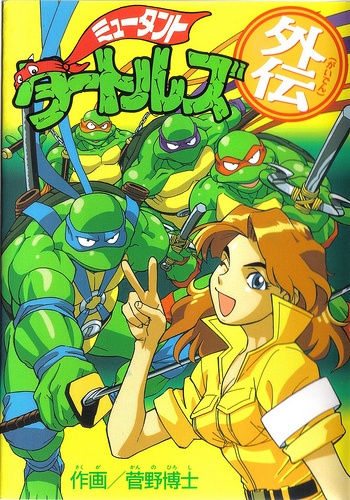 It’s time to look at a quick TMNT one shot that came out a while back. Unlike the last two titles I read this one is a full volume so there’s more of a story to tell. Each of the 4 stories are fairly stand alone but there is continuity here. It’s a fun enough TMNT story and one that fans should enjoy as it’ll definitely remind you of the 80s cartoon. The turtles are ready to fight, but they’re really just interested in the pizza. Meanwhile Shredder is up to his usual schemes.

The first story gives us the quick introduction of the turtles. April managed to find out about the Foot Clan, but naturally this means she is on Shredder’s hit list now. The Turtles save her from being kidnapped, but the Shredder hasn’t given up yet. At this point in the game the turtles are pretty confident about their skills and I suppose they should be since they handle the underlings with absolute ease. The Shredder still appears to be above them though.

The second story has the Turtles framed as a new group of turtles appear and are stealing gems. It turns out that Shredder built 4 turtles of his own that have copied the skills of the real turtles. This made them into perfectly deadly copies who seem to be stronger than the main ones. Fortunately Splinter shows up with a pep talk to whip the turtles into shape so they start to make a comeback. It’s definitely clear why Splinter is the leader of this group. Without him the turtles would be doomed.

Next up is probably the story with the highest stakes. Shredder is finally ready to unleash his doomsday weapon on the world. It turns out that this is in the form of a giant robot. The Turtles almost immediately give up once they see it so it’s lucky that Splinter was in the neighborhood. While the actual robot’s design may not have been amazing, it was nice to see Shredder come to close to world domination.

The final story is probably the oddest one of the bunch. That’s because it’s a total comedy while the others tried to be serious. It also decides to have Japan be a stereotype as everyone has buckteeth. It’s certainly out of left field and I don’t know what the author was going for here. Then we find out that Shredder’s big plan it to use the Muramasa sword to turn April evil, but by mistake he gives it to her best friend who decides to beat Shredder up. If you ever wanted to see him running for his life while asking for mercy this is the one for you.

So, that’s the TMNT collection. The art is pretty sound throughout so that’s good. It’s a pretty pleasant read as a result and it’s easy to go through the chapters. As far as the writing is concerned, I suppose it’s good. Ignoring the final story which was a full comedy, the others did a good job of capturing the 80’s turtle vibe. The action scenes are fun when they happen even if they tend to be short. Shredder and the Foot always have a presence here.

If anything, fans of the turtles may just not like how quick they are here to give up. Also, the turtles don’t really have much of their respective personalities as they all tend to act the same. Mikey’s probably still the turtle who is the most into pizza and stuff, but we don’t see Raph being rebellious or Leonardo doing anything particularly as a leader. He’s just along for the ride like everyone else. Meanwhile the villains are all pretty generic to bad. I guess the only solid one would be Shredder’s boss and the volume ended before he could actually appear. If only the series could have kept on going.

A risk of the anthology format is always that you’ll run into some weak stories in the mix. Fortunately TMNT manages to avoid that. While the final story is the weakest, it’d not like it impacted the score or anything. I still think having a full ongoing adventure is always your best bet, but when the title succeeds I suppose I can’t have any real complaints. Each story was fun and had a fight scene. At the end of the day you can’t ask for much more than that.

Overall, there may not be a whole lot of memorable moments here that you’ll look back to down the line, but it’s still a fun volume that I’d recommend checking out. I still have two more TMNT titles to check out so we’ll see how those do. I expect they should be pretty good. With the exception of the Michael Bay movies, TMNT is typically a consistent franchise. The best version of it was back in the 2003 show, but the rest are still pretty fun. As long as you are ready for this then there should be no problems.