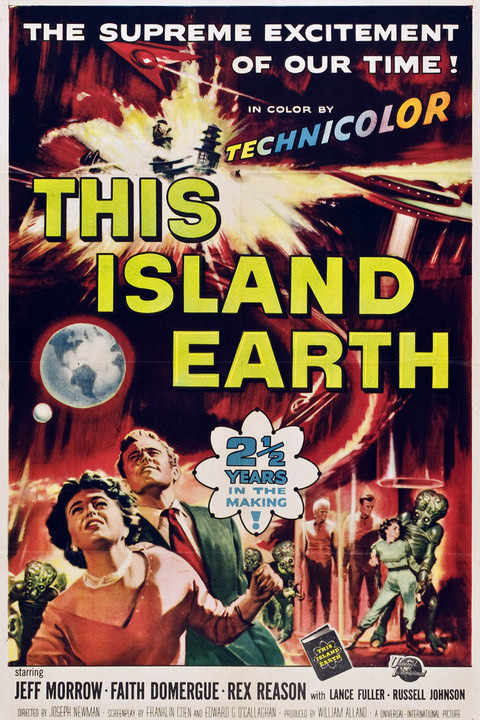 It’s time for a retro Sci-Fi movie. This one definitely had an interesting plot so I was ready to see if it could make it all the way to the end. The movie takes a different direction than what I had been anticipating though and while that still could have worked, I believe that the film lost its direction. The second half doesn’t live up to the promising beginning even if there are a lot of interesting themes at work. It ends up being a movie that is crammed by a bunch of plots and probably would have worked better as a full TV series or movie series. Still, it’s a pretty engaging watch and definitely one of the original alien stories.

The plot follows a pilot named Meacham who is also a super genius. He has been studying Atomic energy along with his partner and together they will make the world a better place. One day, he receives a bead of immense power and a guy on a computer screen tells him to get on a plane. It’s purely optional, but the alien blows up the table and nearly destroys the main characters before Meacham disconnects the TV. Meacham ignores the act of violence and decides to board the plane. It turns out that the “aliens” are actually normal people who all work in a big government facility. They have obtained the best geniuses from around the world and simply want to achieve everlasting peace…through Atomic Energy. Meacham notices how this could build the world’s greatest nuke and also notices how everyone is acting oddly. Maybe this paradise isn’t quite as pleasant as it appears to be.

From the start there is a lot of tension here. Have the humans been replaced by alien shapeshifters? What are they planning to do witih all of the Atomic energy? Are they even aliens or is it possible that they are simply very advanced people? You’ll be wondering about all of this and more as Meacham subtly looks around. He actually does a pretty good job of gathering intel and not being too obvious with what he’s doing. He probably should have guessed that the aliens could see through the walls since their tech can do just about anything, but I suppose it was a worthy attempt. By this point, Meacham decides to get a little more bold with his plans.

It turns out that it is aliens who are running the operation and they have resorted to brainwashing humans. The same would have happened to Meacham, Ruth, and Steve but the alien in charge of this branch believes that brainwashing defeats the purpose of getting the help from the humans. The aliens need them to come up with new innovations because their own planet is dying and they need Atomic energy to protect themselves. His suspicions prove to be accurate as the brainwashed scientists are no longer useful. Still, Meacham and the others aren’t fools so they decide not to help. They try a good escape effort, but are kidnapped and brought to the alien planet.

This is where the film maybe adds too many elements. There is a big intergalactic war going on and both sides appear to be pure evil. They sling meteors at each other and take over planets to defend themselves. The alien race that is attacking Earth have powerful guard robots to protect them. Fortunately, they don’t stand up to well to a good human thrashing. The designs were pretty neat though. Again, Meacham and the others made the right move in not trusting these aliens. They would have certainly been used and then thrown away. As it is, they were very close to being brainwashed. Some satisfying punches are thrown. Letting the alien help at the end was a little cheesy and I definitely think he was too far gone, but it was a decent attempt by the film at trying to make him likable.

Besides Meacham stealing the show rather easily with his dynamic performance and intense voice, the supporting cast wasn’t so bad. Steve seemed like a reasonable fellow even if his role wasn’t too big. He was willing to make the ultimate sacrifice to help the others so that speaks volumes about his character. Ruth is all right as well as she helps Steve trust Meacham and helps the team stay active. Unfortunately, she doesn’t do much after that besides getting into trouble with the aliens a few times. It would have been nice to have seen her use some of her genius to take down the robot since she is also supposed to be very smart.

Back to the robot, I wasn’t too impressed with it. While it may look cool, is it really that deadly if a human can deal so much damage to it? I was a little skeptical the whole time. Still, the overall effects were very impressive considering that this came out in the 50s. Honestly, it would hold up fairly well by the 70s standards as well. It has elements from Star Trek (The ships and the fights are almost identical, but on a lower budget) and even Star Wars with the big battles going on. I definitely got a little invested in the universe and could have had quite a lot of potential as a franchise. There’s just so much that they can do here.

Alas, it was just one film so they really had to pick and choose what they wanted to do. The best part of the film is still the beginning as it’s all very strange. You don’t know what’s happening, only that the whole situation is eerie. It felt like a Twilight Zone with the atmosphere being this way and it was just handled really smoothly. It reminds you of why the Sci-Fi genre is so popular in the first place, it can give you some really intense plots.

I think what puts this film over the edge is the strong writing. I’ve said this many times over, but you simply don’t see this level of writing nowadays. In modern films you either have to deal with some language or characters having annoying/quirky gimmicks to differentiate them. These films don’t bother with that as everyone just speaks matter of factly. All of the threats are said very politely and everyone is passive aggressive. They all talk to each other with a lot of respect, but still show a lot of emphasis depending on the situation. They may be nice, but they are still making a point. As such, the dialogue is pretty strong throughout.

Overall, This film was actually really interesting. It may not have lived up to its full potential and scored a 9, but it still did a lot of things right and nothing wrong. An animal appeared and actually lived to tell the tale for a change. They really should have considered a sequel where the aliens got to attack Earth or maybe the other side since the main ones were defeated. With their advanced technology maybe it would seem like a blowout or something, but I definitely think it could have worked. It’s easy to see why this film is apparently so well known (I had never heard of it until I watched the film to be honest) and it’s aged really well. I definitely recommend checking it out as it shows you how an alien film should be crafted, even if perhaps it is a lesson on how you probably shouldn’t execute it. At the very least, not so many plots when your run time is only in the ball park of 90 minutes. With Star Wars coming up soon, I’ll be able to get my next Sci-Fi kick provided we don’t stick with Luke’s plot for too long.