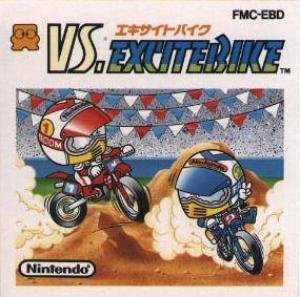 It’s time to look at the next Excitebike game. This one is actually very similar to the original to the point where you could basically call it an enhanced remake. It gives you the classic mode like in the original but you also have the new vs option. It’s a pretty fun addition since you can finally have a true 1 vs 1 battle against someone else. That’s basically the only big new feature though so we’ll have to see if it’s enough to keep you playing for long. If you already played the original a lot then I doubt you would stick around here, but otherwise this is the game you’d want to start with. The gameplay is still pretty fun and the game has a reasonable amount of content so ultimately I would say that this helps take the game pretty far if you ask me.

The gameplay is that of a 2D racer. It’s almost overhead style but not completely from that view. The idea is to make it to the end of the stage within the timeframe in order to break records and win. You keep on doing this as you go through all of the races. You can also do the vs mode of course where the only objective is to stay ahead of the other racer. It’s a pretty fun game and it’s always fun to try and knock the opponents off of their bikes by going in front of them. Honestly it seems like landing a hit here would be pretty much fatal as there would be no way for the other racer to make up the distance at that point. From there their only hope would be for you to make a mistake. In that sense I suppose the game could be a little more balanced but it certainly does help the stakes.

The graphics are just as good as in the original title. The bikes all look pretty solid and the level designs are good as well. The game is able to keep up with your speed at all times. I do find that 2D racers like this can be a bit rough since you don’t really see the obstacles ahead of time and have to completely rely on your reflexes. It is an interesting option though and while 3D racers are my favorite I’m always game for trying these out as well. The soundtrack is less memorable though to the point where I can’t really remember any tunes. It’s a shame but that definitely doesn’t hurt the score, it just doesn’t help it.

In terms of replay value all I can really say is that you can keep on racing and try to beat your own records. Up to a point that’ll be fun but there are only so many different methods you can try. There are no shortcuts in the levels or anything like that so once you are good at consistently dodging the obstacles that are present I fear that you will plateu quite quickly. The replay value here just won’t last you for very long in the end so this is the kind of game you pick up for a day or a weekend. It’ll be fun during that period though which is important.

Overall, Vs. Excitebike is basically the original game but with an extra feature so by default I would recommend this one a little higher. It’s pretty interesting that the NES Online has both. I really wouldn’t have expected that so it’s a pretty nice surprise. If you like racing games then you owe it to yourself to try it out. This is one of the original racers after all and spawned a bunch of spinoffs. My favorite game in the franchise is definitely Excitetrucks. I remember playing that in the very early days of the Wii and it was a really nice way to start off the console.