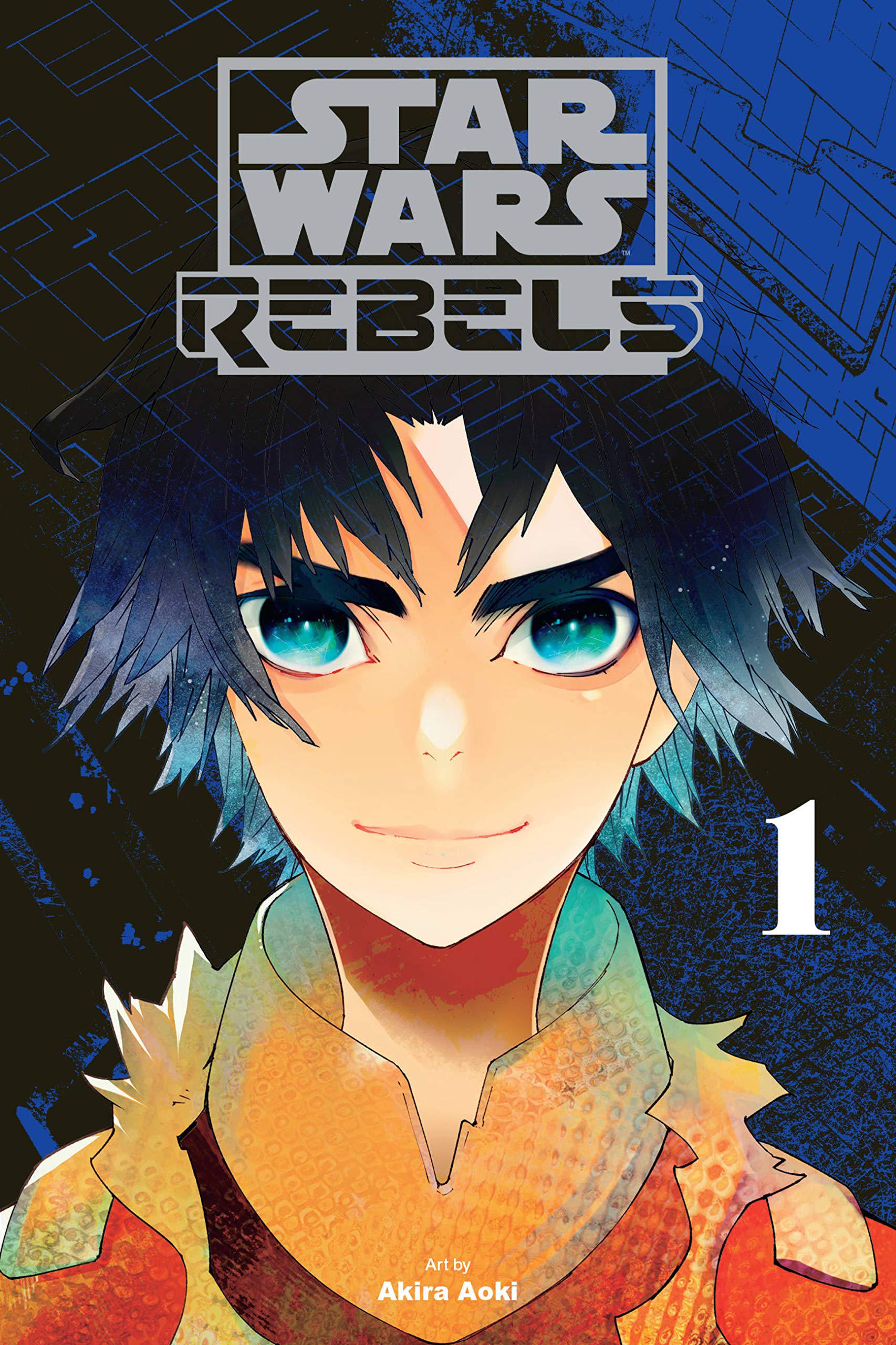 Star Wars has returned for a quick manga adaption of the Rebels show. It didn’t end up making it that far but is a fun little read. Ideally this will get you interested in watching the show which was probably the objective from the start. It’s a classic space type adventure and you can see how this premise could be turned into a long running show as needed. The Star Wars universe is vast after all so you could definitely do a lot in there and that’s why spinoffs to the franchise can really be unlimited as needed.

The series starts off by introducing us to Ezra who is a kid that runs around stealing and doing whatever he has to in order to survive. He lives in a rough district and there aren’t exactly a lot of options for him right now. One day he bumps into the Jedi known as Kanon and that ends up being a rough twist of fate for the kid since he can’t hope to beat this guy. He eventually finds out that Kanon isn’t so bad though and reluctantly joins his group along with Hera, Zeb, and Sabine. The group of them help the poor and restore justice to the world but they do so in a very low key way. You could sort of call them scavengers or bounty hunter types. They have to be careful though because Darth Vader and the Inquisitor would like nothing more than to find and shut these guys down.

This takes place after Order 66 went out so most of the Jedi are long since dead. Kanon was able to survive but that could easily change. He has pretty much stopped being a Jedi in all respects as while he still uses the lightsaber, he isn’t going around training or any of that. To an extent he’s just too nervous now and the series delves into this more later on. This is a good era for storytelling since a lot should have happened in this period. I still find it odd how all the Jedi got wrecked by Troopers so I wouldn’t mind a retcon one day where they were all beaten by Sith Lords or Inquisitors. Would make a lot more sense.

The series is fairly short with 15 chapters but that’s still enough time to get in some quality adventures here. I’d say the most impactful one is when Kanon takes Ezra over to meet his former master Luminara. Unfortunately it turns out that she was already murdered and this was a trap laid by the Inquisitor. It works really well as a big mission here by really introducing us to the villain and also helping Kanon get over his doubts. Before then he was constantly deflecting Ezra’s requests to train by saying that Luminara would do it.

Ezra didn’t want her to train him, he wanted Kanon since that’s the guy he looks up to as his teacher. This was a tough concept for Kanon to grasp for a while but this adventure at least gave him his confidence back. The action scene here was also really good as the Inquisitor could absolutely fight with the best of them. His lightsaber style was very good and I would like to see him more in future stories.

While the art can sometimes be a bit on the “Tie-In” side where it doesn’t feel great, the artist does know how to handle the dramatic scenes really well. You’ll suddenly get a lot of ink for important moments that makes the villains look absolutely fierce. Darth Vader’s appearance at the end for example is a great example of this. You certainly won’t forget that scene for quite a while. It really pops out at you and reminds you why he’s going to be a big threat if he ever catches up to the heroes.

Hera, Zeb, and Sabine don’t get a whole lot to do here before the series ends but they all seem like fun members of the crew. I think the ship has a nice dynamic with all of these characters running around. They may not have Jedi abilities but they can still use their blasters and help out that way. With more time I’m sure they all would have gotten their own mini arcs at some point or another.

Ezra was a solid character right from the start. I liked that he was fairly tough and could look out for himself. He didn’t need anyone to protect him and surviving like that took a lot of skill. In a way you’ll probably miss this part of his character once he is a part of the crew but once he’s with the team he’s still fun. He’s slowly learning how to use more of the Force and his lightsaber so after the time skip he’s probably really strong. The series ends real quick at that point so we don’t really get to see what he can do yet. Perhaps a sequel will come out some day.

Kanon doesn’t look great at first due to those confidence issues that I mentioned but by the end he’s good. Once he has finally embraced his calling as a Jedi and a teacher then he is ready for the big leagues. I am also glad that the heroes have at least one Jedi Master on board because I can say that a big reason as to why Star Wars is cool is due to the lightsaber battles. If your whole cast couldn’t really fight all that much then that would have been disappointing. 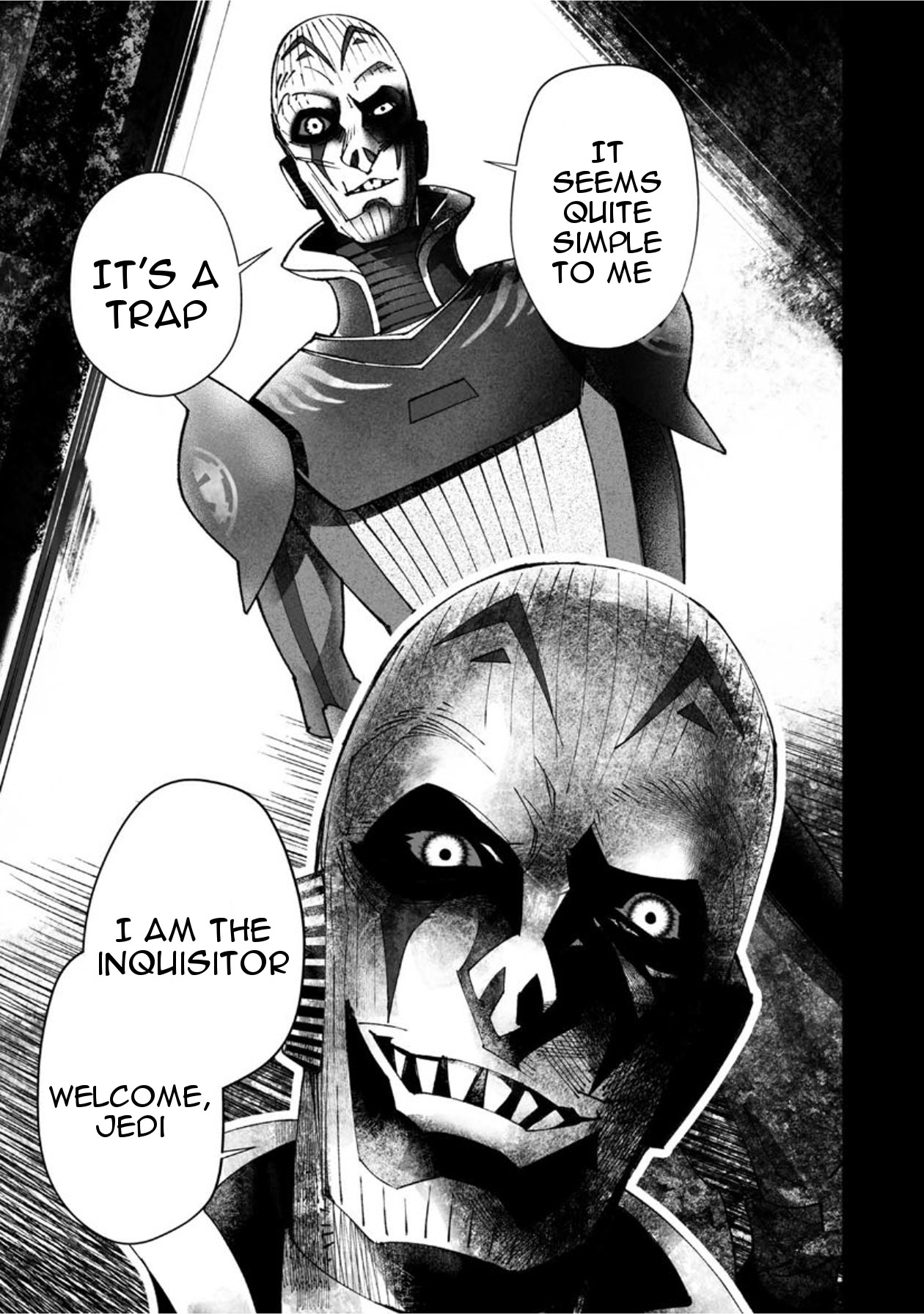 As for the Inquisitor, he makes for a very imposing villain. I like how determined he is to destroy the heroes and really doesn’t give up no matter how far away they get. His trap using the dead master was a very smart one as well. He reminds me a bit of Darth Maul with his design. I assume this guy is probably not ready to go up against Sith Lords like that but his skills are still good enough to be worthy of fear. You don’t want to mess with this guy unless you have to.

There is a mini arc here about Teebo, an alien who knows what happened to Ezra’s family. It’s definitely one of the most emotional parts of the series because of course Ezra blames Teebo for running off. The characters all try to help him get past this and even he knows that it’s unreasonable, he just has a hard time getting around that anyway. Realistically Teebo couldn’t have done anything, it’s not like he’s a fighter. I wouldn’t say I was a fan of Teebo myself but you still couldn’t blame him for this.

It does help lead to the rest of Ezra’s character development though from being a loner who wasn’t very forgiving of others to someone who can lead the whole team like a capable leader. I wouldn’t be surprised if he totally took over as leader eventually because it comes naturally to him. So I did like Ezra quite a bit here, he’s a fun main character.

The series ends in one of those ways where the adventures continue and you can imagine how it all plays out. We still got a good amount of adventures on our end to have fun with in the meantime. The emotional stuff is handled well and works to make the action even better. If the show is really like this then I can see why it was a hit. Usually I see more fans of the Clone Wars but there are a good amount of Rebels supporters too. I never really see people talking bad about it at least. I’m sure the show would have more time to really show off the characters too since the manga didn’t have too much time for that.

In a way I would say the whole manga version really works as an origin story for Ezra. It’s not really going too much farther beyond that and this succeeds well as an origin since there was a good amount of action. It’s not one of those slow boils where you’re waiting for the main character to step up to the plate. Of course you have to assume these guys ultimately get bumped off or something since we don’t see them in the main films but that’s what also helps to enhance the stakes here. They could die at any moment so every mission suddenly becomes a lot more dire. 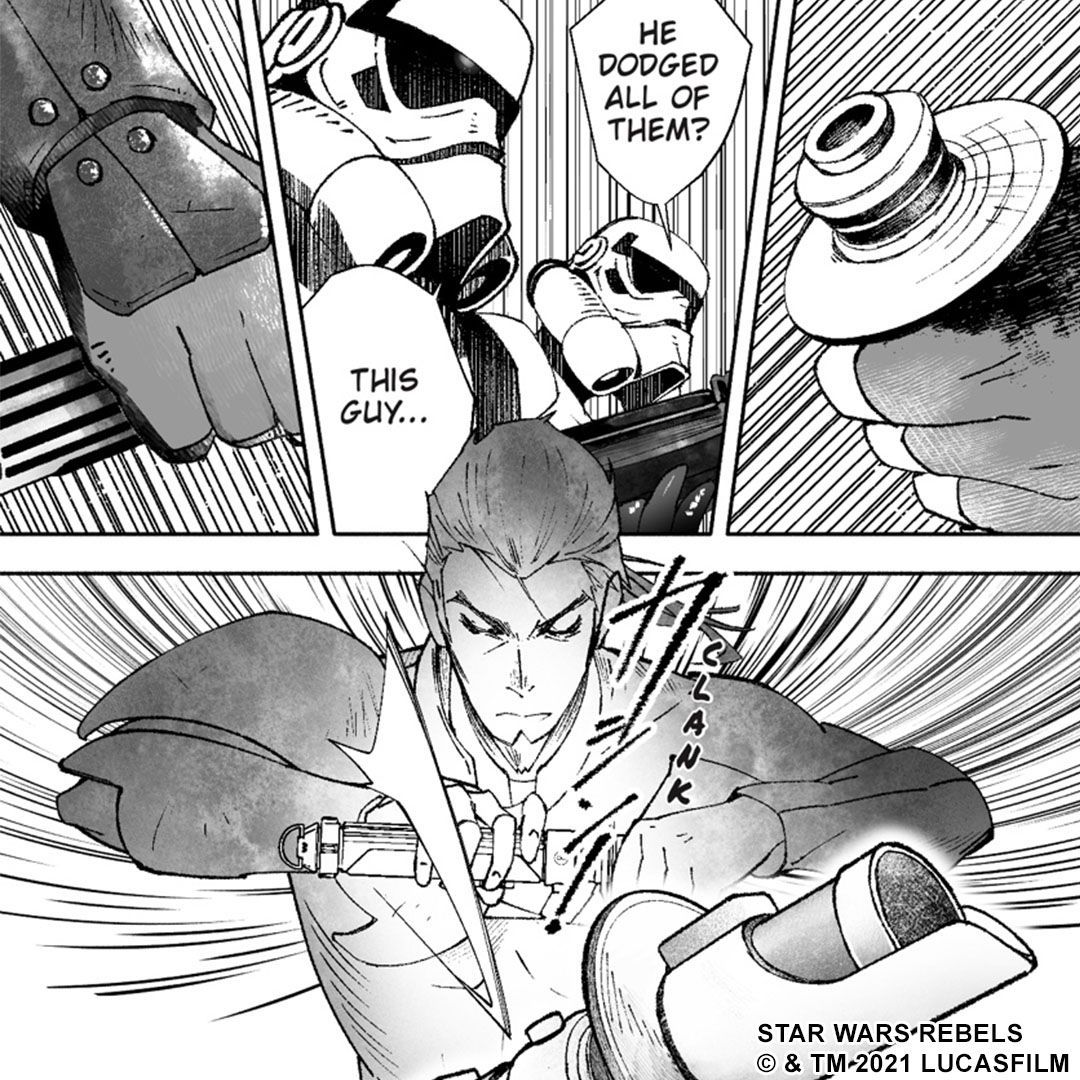 Overall, Star Wars Rebels is a pretty good manga. You’ll have a fun time with it. It’s well balanced with the action and adventure while also just being fun to read. It may not be super memorable at the end of the day but it’s a good story and makes for a fun read. At the end of the day the objective of any title is to be enjoyable and this one fits the bill. It never drags on and it’s just a good story for any time with a lot of replay value. I’d recommend it if you’re looking for a good sci-fi action. 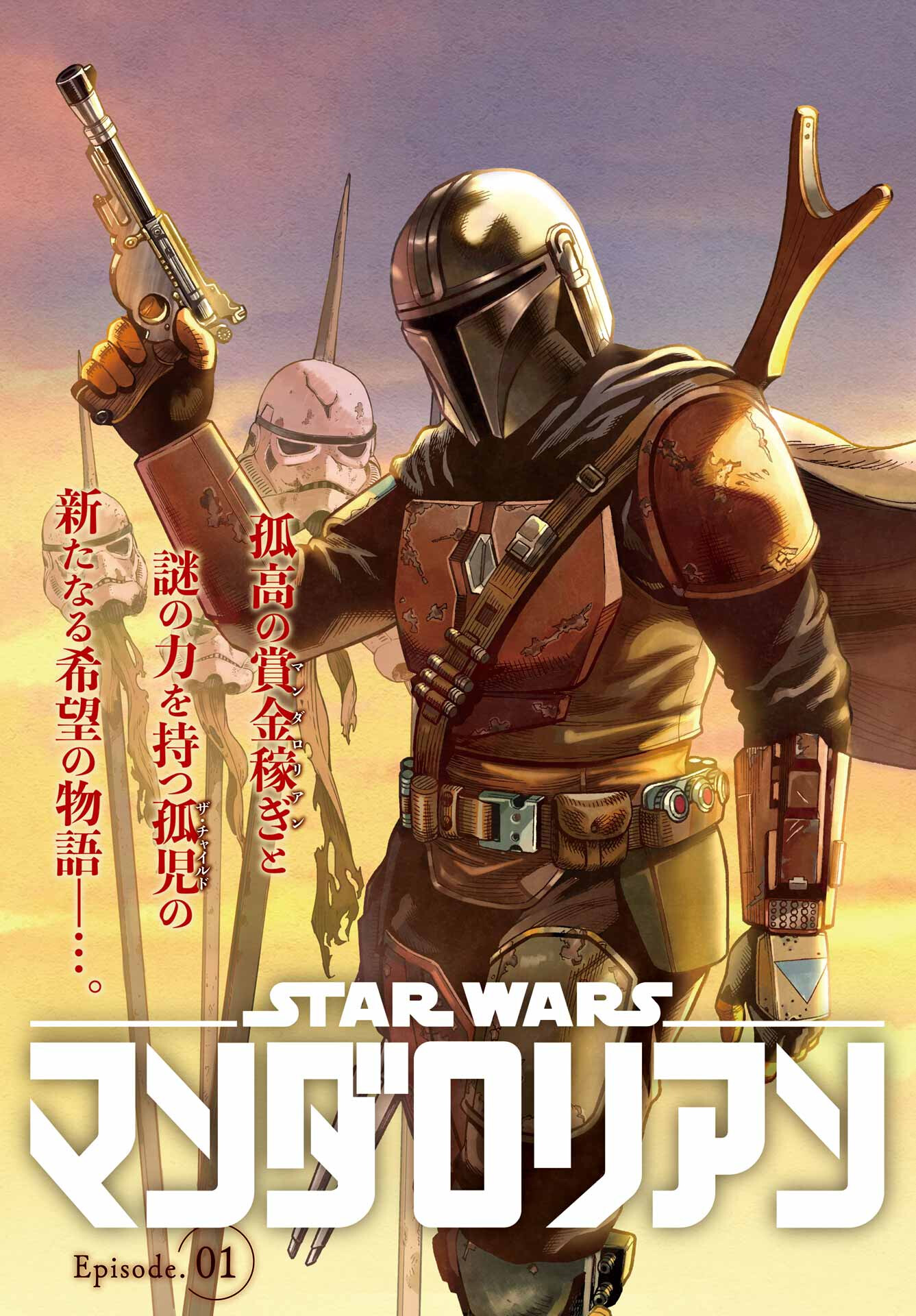 The Mandalorian manga adventure has started! I’m only one chapter deep so I’m pretty early on but it’s a good start. The main character already seems like the hardcore type of lead that I like to follow. He’s very down to business. I’ll have a review up for the series as soon as it’s over. We’ll see how good it ends up being.