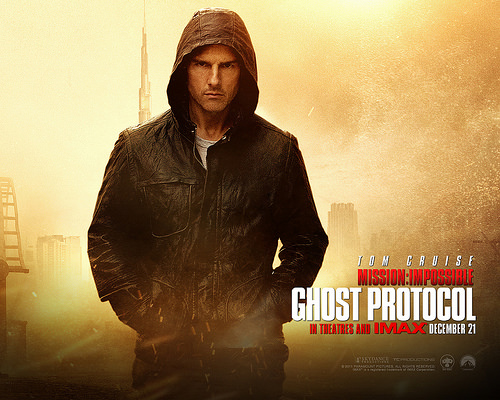 It’s time to look at the next installment in the Mission Impossible series. This one was the big return to greatness for the series and just brings together all of the good things into one package. The film starts out great and just continues on that path for the whole duration. It is certainly a little funny to see Tom Cruise’s name pop up 3 different times during the opening credits, but I guess they have to show that he is the main character here somehow. While it just barely gets edged out by film 5 for me the two are almost indistinguishable.

The film starts off with Ethan Hunt in prison as the IMF work to break him out. This also involves letting a bunch of prisoners free as well so you’ll probably feel bad for the guards who weren’t exactly prepared for this. The group lets Ethan know that someone is trying to steal a bunch of nuclear codes and is looking to end the world. Ethan quickly gets on board and the best way to find the villain is to break into the deal that Hendricks is having with professional assassin Sabine. Sabine knocked off the IMF agent who had the codes and she wants some diamonds for it. The heroes will take part in both meetings to confuse the two parties, but will the situation go as planned?

Plan A always fails in these kind of thrillers so you always want a plan B. Ethan is good at adapting on the fly at this point since he’s an old hand by now. He’s been on a ton of missions and does as well here as in the previous missions. He did a great job of following Hendricks through the sandstorm even if the villain got away in the end. His fights throughout the film were solid and you never feel like he is in over his head. You may wonder why he is back in the field permanently instead of retiring, but I’ll assume this was the price for the deal that he made with the IMF. Definitely not a very nice deal, but one that I wouldn’t put past them.

This is the first Mission Impossible film where the rest of the cast is really helpful as well though. Jane knows how to fight which is certainly good since she ends up fighting Sabine. Sabine didn’t do quite as well in that scuffle as I thought she would, but that speaks to Jane’s ability. Considering that her character may not return, she did a good job here. If I had one complaint about her plot it’s that naturally the team had to use her charms to get intel on the villains. It seems as if this is a curse that happens to all female agents at some point or another. Fortunately the scenes weren’t too long or drawn out as they would have been in a different film. Benji also gets a big role but as always he tends to cut everything very close. The heroes were nearly thwarted thanks to him. He’s a good comic relief character and I don’t mind him. It would be nice if Benji would eventually panic less and get used to the whole thing though.

Then we have William who is a new character and easily the best addition to the series. The mystery around him is enjoyable since the guy is a top notch fighter yet he’s kept in the background for desk work. I’d definitely volunteer for the latter though since the field agents keep dying left and right. William may be a little more by the book than the others which causes him to doubt their risky plans at times, but his heart is always in the right place. If he had decided to go against the heroes and sabotage everything then that would have destroyed his character. I don’t fault him for having doubts though.

The villains aren’t quite as memorable as some of the others, but they aren’t bad. It was nice to see an assassin get thrown into the mix because I imagine that they would be tough for the IMF to handle. You never know when they will pop up and they should have a good amount of skills as well. Sabine made for a fun antagonist. Then we have Hendricks who can’t really fight as well as any of the other villains, but he is dedicated to his cause. He certainly did everything he could to keep the case from Ethan even if it was all futile in the end.

As you’d expect from the series Mission Impossible is full of nonstop action. The characters are constantly running or driving around the place. It’s what makes the franchise so fun since there is rarely a dull moment. The only times the film slows down is when the heroes decide to discuss a plan or in this case for William to reveal memories from his past. The whole story behind Ethan’s plot and why he was locked up was pretty interesting. I’m glad there was a twist about that since it would have been needlessly tragic, but it’s certainly a story that would be very believable either way.

The soundtrack is nice and fast as well. While it’s not quite as rock solid as Mission Impossible II’s, it still has the classic tune and fitting themes for whatever scene is occurring. None of the themes will ever take you out of a theme and if the film gets quiet then it is certainly intentional. The movie doesn’t miss a beat and all of the technical aspects are on point. The special effects are solid and it’s nice to see how high tech the equipment gets during these films. I do feel bad for the masks though as they never seem to work anymore.

As mentioned earlier this film gives the complete IMF team more to do than the previous ones. While it is cool to see Ethan take out whole armies on his own, it does make sense that his teammates should be equally talented to be a part of such an outfit. Seeing everyone get to contribute is good and it never feels cheesy since their tasks fit their abilities. At the end of the day Ethan will still be performing his crazy stunts and engaging in a lot of fights so those aspects won’t change. Now he just has to share the spotlight a bit.

Overall, Ghost Protocol is a really fun film. It definitely won’t come as a surprise to you that the government is once again shutting the IMF down though. The group has had a tough time of keeping its organization free of traitors in the past so it could be a liability at times. Since they have to keep disavowing everyone as well it probably looks suspicious from the outside as well. It’s good that the group are so good at their jobs though. I highly recommend this film whether you are a fan of the franchise or are just looking for a solid action film. Between the great writing and the rapid pacing there is something here for everyone. I’m definitely looking forward to the new film that just came out!