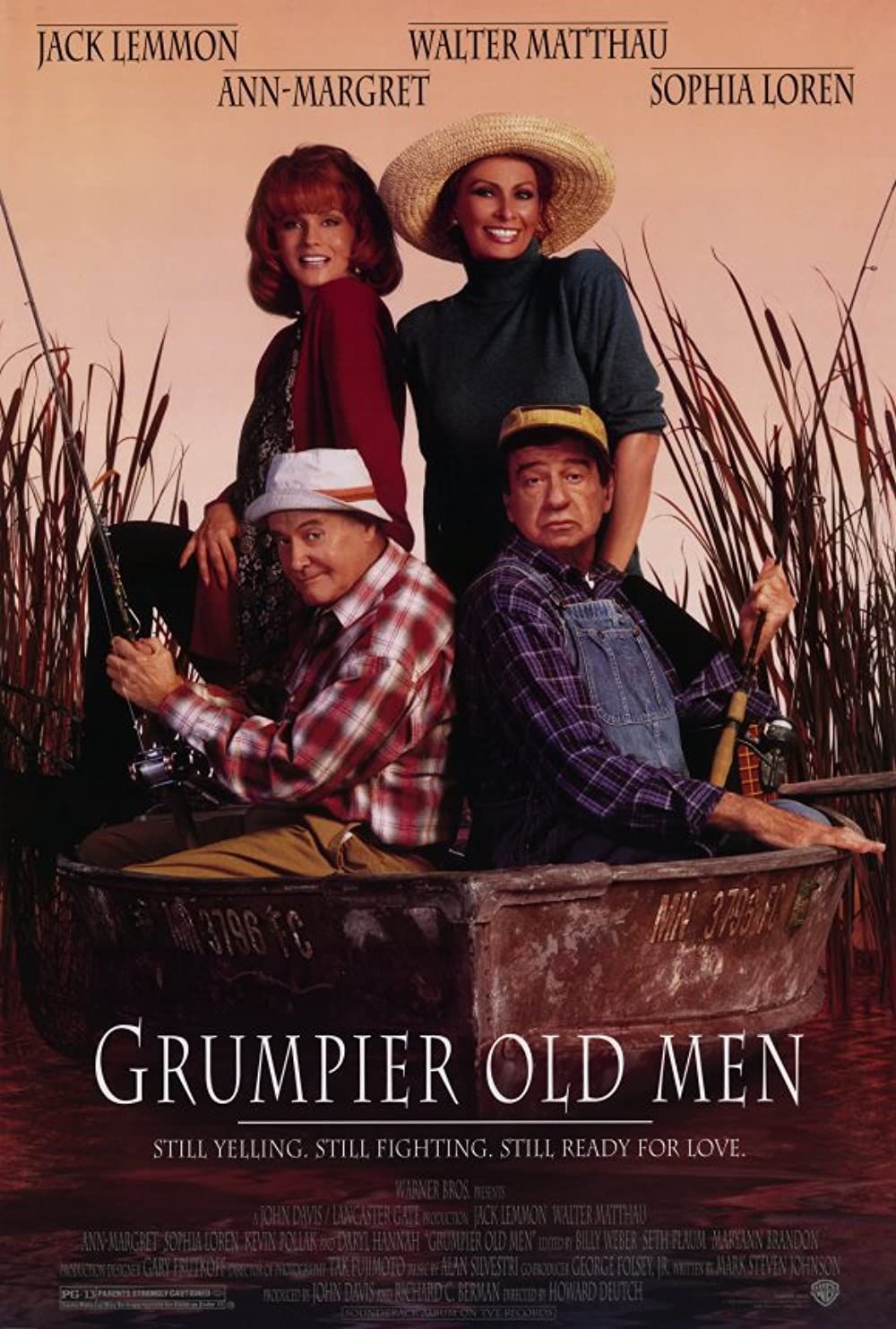 It’s time to look at the big sequel! Grumpier Old Men really picks up where the last one left off. In a lot of ways I would say it’s just like the original and has the same strengths and weaknesses. As to which film was better, well I would say the first has the slight edge for me. It’s just better in each area and yes even the romance is better than in this film. I’m afraid that is the weakness of the title yet again.

The movie starts with John and Max still having their friendly competitions although I would say they’re on better terms than usual. Their kids are getting ready to be married and so things couldn’t be better. Unfortunately their lives take a twist when the owner of the bait shop dies and Maria moves in. She has decided that the area will be a restaurant instead and Max doesn’t like that. He decides that he will do whatever it takes to ensure her business is not a success. He will sabotage it at every turn until she surrenders. John is willing to help him on this so for once you’ve got both characters teaming up against a new antagonist.

I would say one of the big issues here is that the film has absolutely no idea what it is doing. The whole main plot with Maria deciding to open a restaurant instead of the bait shop was a solid premise. We could now have a good battle with the heroes uniting to take her on yet the movie moves on from this premise early on into a series of unrelated events that don’t really connect much. By the end we do get one fake out involving a wedding but there just isn’t a lot of focus to the movie and it squanders all of its potential.

That’s why the opening scenes are the best ones with the heroes pulling pranks on Maria. It made for a nice montage and again, it was just nice to see some unity between them. They united to fight a common enemy and Maria seemed like someone who would fight back rather well. That could have been the premise for the entire film but unfortunately Maria gives up almost immediately when nobody goes to her restaurant on opening day. I have to assume this was due to John and Max’s interference unless they were right and people wouldn’t travel here to eat.

So Maria tries to seduce Max which doesn’t work but Ariel says she’ll help out. Okay so we have a new plot premise here. A 2 on 2 battle with John and Max fighting Maria and Ariel. That could be a lot of fun and Ariel knows them really well so you can see how there could be a lot of back and forth here. A bit different from the first premise but it could absolutely work. Only Ariel is a non factor after this scene. Her only contribution is to tell John to go over and apologize or else. She even kicks him out of the house in the meantime.

So John heads on over and is promptly defeated so maybe under Ariel’s orders John will be forced to team up with Maria to stop Max? This premise might even make the most amount of sense since it gives us an excuse to have the two characters fighting again. There’s a lot of mileage there but the film doesn’t go with this either. Instead it’s at this point where the film gets more dramatic and we find out that Maria likes Max just like how he likes her. From there the battle is completely over. The restaurant is almost never brought up again and we transition to more about the kids’ romance plot and the characters getting to know each other.

Or as I call it, the plot ends here. They foiled Maria (Since she relents about the bait) and her plans so the movie ended here. The issue is that it was too soon so that’s why the rest of the story elements are brought in. It’s a shame too since all it does is drag Jacob and Melanie back down. So from the last film she agreed to rebound with Jacob and he was thrilled since he always had a crush on her. Well, the marriage is super close but at the last second Melanie gets cold feet and wants to push it back while Jacob starts hurling insults in a moment of weakness. Just like that, the wedding is off. The plot point is so meaningless that this is reversed very quickly.

The two characters just aren’t likable though and if their romance is already failing then I don’t see it lasting past the winter. As mentioned, the main romance is also really bad though. You mean to tell me that Maria genuinely fell for the guy who was going out of his way to sabotage her career and humiliate her? Keep in mind that she put all of her money into this venture so she could easily turn out to be bankrupt before long. I don’t care if Max was rocking an 8 pack, she is not going to fall for him under this scenario.

At least for the bar scene she was trying to manipulate him but it wasn’t real yet. After that somehow she did fall for him and the whole romance plot is a mess. Then for a “comedic” subplot we have her mother falling for John’s father and the whole thing will make you cringe. That guy’s one of the worst characters and I don’t know why this film decided to give him more of a role. It definitely wasn’t worth it I can tell you that much. Any scene with him and Maria’s mother was just brutal.

The film can also be a bit obnoxious with the fanservice. The whole scene with Maria at the bar was painful and certainly didn’t contribute to the story as a whole. The writing can still be good with the banter even if the script isn’t always great. The characters certainly have a bit of a one track mind most of the time with how desperate they are. It’s a good thing Maria doesn’t mind with how loudly Max was singing about her during the boat scene. The jaded part of you will almost think she was desperate for Max because of how he sabotaged her business and she needs to stay afloat somehow. This will apparently be her 6th marriage which is a whole lot of relationships in her past. Another reason why I have my doubts about this romance working.

Take away the romance and Maria’s a good character. I just wish we could have stayed with her being the antagonist because that would have been way more interesting. She seemed tough enough to hold her own and that would have just made for a really engaging plot. Meanwhile Ariel really disappears from the movie for the most part so don’t expect a lot out of her. John and Max are the same as ever. They bicker a whole lot and have their usual battles but not as much as in the first film. Their kind of dialogue is still similar and is the catchiest part of the film. It really wouldn’t be the same without their battles.

Overall, I thought the film took some different turns from how it appeared to be going at the beginning. As a result the second half of the film can feel completely aimless at times. I’ll give the movie credit for the wedding twist near the end but otherwise I just couldn’t give this film a whole lot of props. At the same time, it was entertaining and really ended in a flash so it got more things right than wrong. If you enjoyed the first film you ought to enjoy this one and vice versa. If we ever get a remake though, it should keep the “Vs” premise from start to finish.