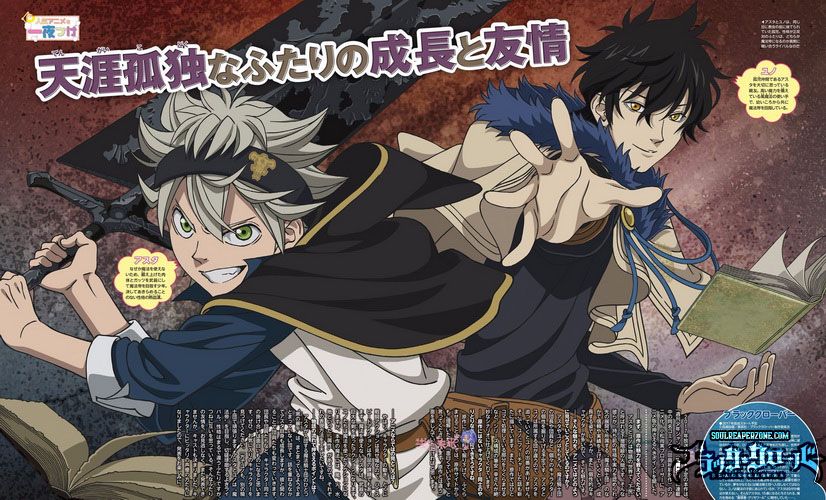 It’s time to take a look at a Black Clover OVA/pilot that came out a while back. It’s pretty fun to see the series going with a different studio/artstyle. Naturally almost nobody is going to be able to touch Studio Pierrot but these guys do a solid job as well. At the end of the day this is still Black Clover so it’s pretty much inevitable that it’ll be good. It’s a fun little special that adapts the first chapter of the series and also gives us a quick flash forward to the ice arc. The characters are cool and the whole thing feels pretty nostalgic.

The special starts with Asta and Yuno fighting off an enemy mage. We then cut away to their humble beginnings. Asta hopes to be the Wizard King someday but unfortunately he was born without magic so there isn’t a whole lot that he can do. Meanwhile his childhood friend Yuno is quite exceptional with magic. They were supposed to be rivals but the gap continues to grow. Yuno then receives a 4 leaf Grimoire while Asta doesn’t receive anything. His dreams may be at an end but when Yuno is attacked by a mage Asta steps in to help. Will he be able to defy his destiny and become a true Wizard King? It won’t be easy, but Asta is ready to do whatever he can in order to succeed. It’s a pretty noble calling and Asta’s determination is part of what makes him a solid character.

So for the main differences here, Asta’s hair is drawn as more of a grey so he looks rather old at times. His change in design is definitely the most noticeable of the characters but it still works decently well. It would take some getting used to, but it’s not a bad design. Everyone else looks pretty normal. While the animation is not up to Pierrot’s level it’s still fairly good. Some shots seem to have less animation and we get some stills but I’m thinking that these Festa OVAs are probably made really quick to come out on time. The important aspects are naturally the fights and I still liked the fight with the chain user. I was also glad to actually see the demon a little more in this version. It felt like we got to see more of his design. The soundtrack is fairly standard but one theme that stood out was a rock theme for when Asta’s fight began. That one was definitely hitting the right notes.

Beyond that this is basically episode 1 as you would expect. We get to see why Asta drives himself so hard. The deck has really been stacked against him. Not having magic in this world is like having an incredible curse be put on your shoulders. You can only do so much without it and you have to give Asta a lot of credit for fighting despite all of this. He doesn’t let the other kids and characters get him down. Then you have Yuno who is a fun rival. He definitely rides Asta quite a lot with all the insults and such, but deep down he still respects their rivalry. He was also willing to defend Asta at the end which is more than most rivals will do. I really like the dynamic between Asta and Yuno. It’s definitely one of the most wholesome main character to rival dynamics out there.

It was a good idea for the series to give us a brief glimpse of the fight that wouldn’t show up for a little while. It helps to spice things up and throwing in an extra action scene is always a good idea in my book. It helps give you something to look forward to instead of just watching the origin story. By starting and ending that way it shows you that big things are coming up and that’s an understatement.

Overall, The Black Clover OVA is a lot of fun. I’d definitely recommend checking it out and then you should watch the full fledged series. It’s only around 30 minutes so it’s not like it’ll take you all that long either. Ideally you should watch the main series first and then go back to this one for some nostalgia. If you don’t really have time to be watching a full anime now though then watching this one works well enough. It definitely holds up well as a mini movie of sorts and you can at least tell people that you’ve seen Black Clover. It’s definitely a lot of fun and currently the best Shounen Jump series going. You really don’t want to miss out on this.