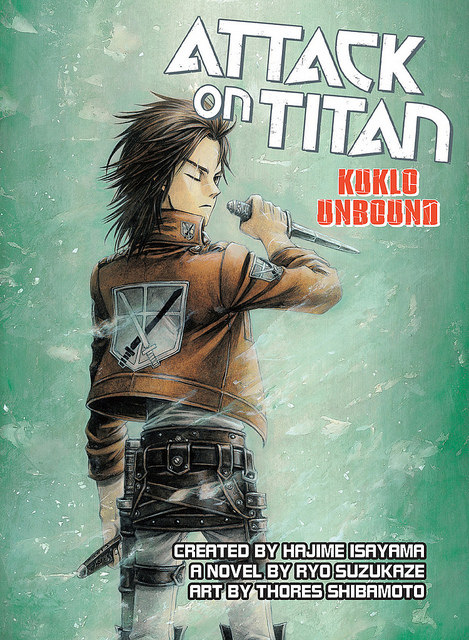 After that last Titan novel, I was beginning to wonder what had happened to the franchise. It’s not exactly known for churning out quality content so was something changing here? Apparently not as this novel goes back to the Attack on Titan that I grew up with. Violent, Edgy, and Unfair. While the story is fairly engaging, the novel gets off to a very bad start and a scene near the middle reminds you that things will never turn out too well for the heroes. The place is just too corrupt.

This story takes place a few years after the last novel. The Titan who broke through the city last time ended up murdering someone, but her kid lived on. People began calling him the Titan’s son so he was sold into slavery and endured a rough life. He eventually escaped thanks to the help of Sharle and now calls himself Kuklo. He wants to join the Survey Corps so that he can murder the Titan who tried to eat him, but many obstacles stand in his way. Does this kid really think he can handle the pressures of the outside world?

Lets get into the basics of why this novel was just no good. First off, the start of the book is just way too dark. Kuklo is trapped in a cage for years and tortured the whole time. By the time Sharle is able to save him, it’s basically too late for his childhood. Attack on Titan does love its edge though and that continues in the next novel that I’ll be reviewing soon. It’s just not a fun way to start a novel and the staff behind Attack on Titan are just too obsessed with giving everyone tragic backstories. You can make a character have an emotional backstory without making it quite that bad.

The main bully through these years was a guy named Xavi. The novel doesn’t handle his plot very well either. For starters, he doesn’t really get any consequences for his actions as he just gets promoted higher and higher through the ranks. When Kuklo finally makes it to the army and finds Xavi, it doesn’t go over so well. Xavi’s flunkies hold Kuklo down while he gets beaten to unconsciousness once again. Keep in mind that these are the heroic soldiers that we’re supposed to be rooting for. Where were Kuklo’s friend and his boss? They were just watching and basically said that Kuklo was asking for it. There were dozens of witnesses, but they all just stood by and let it happen. Again, there’s no consequence for Xavi and Kuklo just has to endure the whole thing. The novel tries to paint the situation in a way where Kuklo was in the wrong there, but I’m not buying it.

This continues as Xavi sneaks into Kuklo’s locker and sabotages his equipment. This leads to Kuklo almost dying during a training exercise. His response to this? “It doesn’t matter” Kuklo was just happy that he lived through it and it helped him improve his balance. That’s okay, but he should have told the commanders about this so they could punish Xavi. Instead, Xavi is free to make another attempt on Kuklo’s life as he takes out a knife and tries to finish him off old school. Kuklo beats him again and decides not to mention it. Ultimately, Xavi somehow turns good and after nearly getting the whole team knocked off by going on a crazy charge against a titan…the others are cool with him. Kuklo’s even going to teach him how to fight.

It was definitely a very unsatisfying resolution to a poorly handled plot line. The less said about it the better. Still, Attack on Titan is a series that thrives on the notion that humans are just as bad as the Titans, if not worse. The manga has a lot of speeches about this were the characters are proud to be evil if it means that they can win. It’s easy to see why there are so many bad apples in the series, they’re encouraged to be like that from all of the speeches and pep talks.

While he may be lacking in common sense, Kuklo is a good main character. He still makes most of the good calls and does his best to help people out when they need it. While his goal for revenge may not be the most heroic out there, he is helping the cause in the end. His physical abilities are pretty impressive and while he is certainly not meta human at all, he’s one of the better fighters in the series by the end. A little training can definitely go a long way.

You already know my thoughts on Xavi so we can skip that. Sharle is a good heroine. While she almost made a pretty big mistake, she logically thought the situation through fairly quick and came to the right conclusion. Her dagger came in handy quite a few times during the novel. Another heroine appears towards the second half as the third main member in the Kuklo squad. She’s pretty tough and makes for a good training rival to Kuklo. While she isn’t as crazy about breaking the rules as he is, she isn’t a super stickler for the rules either. Once the main character gets into danger again, she brings the squad out to help. Cardina is a good ally as well, but one that tends to get on your nerves a lot. Not helping Kuklo against Xavi and the others was pretty bad. It was hard to get over that. Beyond that, he’s a good Yes Man type character as he goes along with whatever Kuklo is doing without too much resistance. He’s a little quicker on the uptake than Kuklo when it comes to government matters so it certainly is handy to have him around.

One thing I still like about these prequels is that the author makes it a point to say that the Titans don’t really bleed. Whenever you slice a limb off, only steam comes out. If the anime had followed this logic, season one could have easily been a 7. The novel is decently long at around 300 pages and that gives it time to include a lot of events. As you may know, the manga version of this is quite long. I’ve been reading it as well and can’t remember almost any events from the book. It’s either an incredibly loose adaption or that’s how much they’ve stretched it out. Either way, reading this book will save you a lot of time over reading the whole manga.

Surprisingly, Angel from the first volume doesn’t show up here. I thought he’d have some kind of big moment, but instead only the rival showed up. The rival looked pretty good as he openly defies authority and fears no one. I can certainly get behind that character and it’ll remind you why the last novel was more engaging. It easily had the superior cast. The two commanders here weren’t great either as they constantly put the heroes at risk for no other reason than to test their resolve. It’s no wonder the Survey Corps were disbanded for so long.

One thing that I have to note is that the Titans shouldn’t be seen as a huge threat anymore after this volume’s climax. Now that the heroes have finally mastered the Vertical Maneuvering Equipment and can slay Titans, that should have completely changed the dynamic of the series. In the main title, the Titans still outnumber them greatly and the heroes never make any strides, but it doesn’t make sense to me. If you’re taking them down so easily, it should be a simple matter to start reclaiming the Earth. That would stop once the Colossal and Armored Titans show up of course, but the normal ones shouldn’t be a threat at all. I dare say that the series could have ended with this novel if not for the super types.

Overall, Attack on Titan is a series that is usually doomed because it loves being grim dark way too much. It goes out of its way to show you how rough life is under these conditions because you have to worry about Titans as well as your fellow humans. It’s hard to root for either side when you know that the majority of the citizens are also pretty bad. While it’s an interesting read, the negatives are certainly large enough where it ends up making the novel bad in the end. I’d highly recommend reading the Before The Fall novel instead. At this rate, that one could end up being the best Attack on Titan novel. It’s just going to be hard for the series to top that one although I’m sure that they’ll try. I’ve still got more novels to go so things could change…possibly. It is cool that I’m finally reading more books though, it feels good!