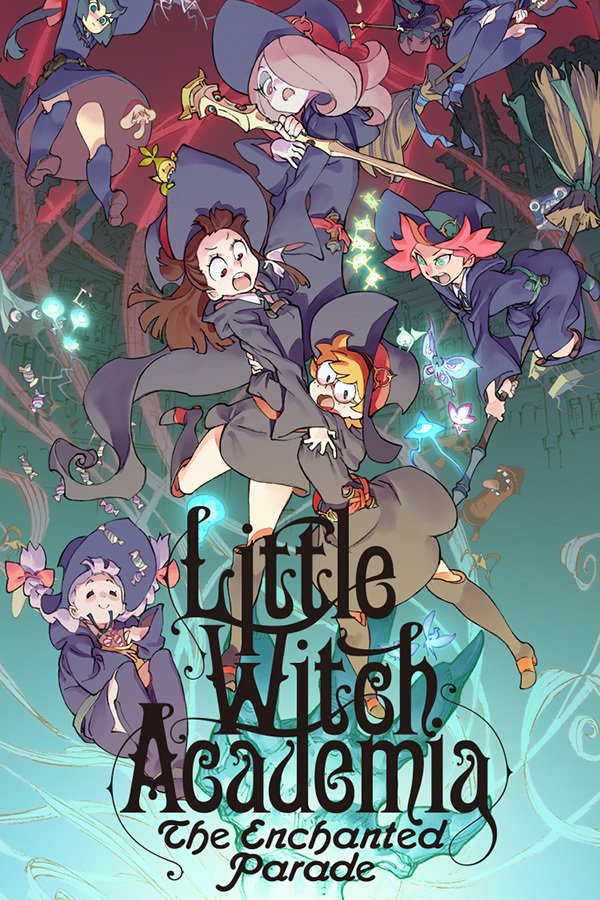 The gang is back in another adventure. This time it’s more of a full fledged movie so everyone can really contribute and we have a longer plot. I would give the first film the edge overall, but this is a good follow up. It’s on the same level and while it does have some more weaknesses it doesn’t do anything bad either. Diana also gets to look good here as she performs some really high level spells so I definitely can’t take issue with that.

The annual witch festival is coming up and Atsuko has been put in charge of the ceremony for this year as a punishment. Why is this a punishment? Well, the festival is basically just an excuse for the humans to mock the witches as they torment them with a bunch of games. Atsuko realizes how ludicrous this is and decides to put on a happy festival instead. Tension quickly begins to build between her, Lotte, and Sucy though as Atsuko begins to get a little obsessive. Fortunately she meets up with some other kids in the group who might be new friends to replace the older ones. Atsuko has to tread carefully here. Even if she can get this parade working, can she really repair the relationships between humans and witches?

I have to say that the whole premise further reinforces why Shiny Chariot was really good for the Witches. People actually liked her quite a bit. If anything the fact that witches didn’t like her probably just made the various relationships a whole lot worse. The school is partially to blame here for allowing such a parade though. From the screens they showed of the previous years it was totally at the witches expense. That’s not a good way to run such a big event, especially in front of impressionable kids.

This special does introduce some more concepts such as the fact that the witches are basically powerless away from their energy source at the castle. This is a bit alarming as they can barely even take on a bunch of school kids without their powers. I know this isn’t an action series so they don’t have to worry about invasions or anything, but I do think this weakness is a bit extreme. Hopefully as they grow older they will be able to store larger amounts of magic power to at least be able to defend themselves with. Otherwise it’s definitely going to be a rough road for the witches.

The two annoying parts of the film are Lotte and the kids. There’s a subplot where the kids represent the rest of the humans in how they don’t like the witches. They steal the power source and engage the witches in a fight near the beginning. The kids are just very annoying. Sure, they’re young so they don’t totally know what they’re doing, but it’s still painful to watch since the heroes can’t do much about it. How can you attack a kid right? By the end they end up helping out, but the problem was because of them in the first place so I can’t give them too many brownie points for that.

Then we have Lotte who is pretty unlikable here. She has valid reason to be upset with Atsuko for breaking her music book, but beyond that she just wasn’t very co-operative throughout the adventure. This was a pretty big deal for the lead so I think Lotte should have been more amiable. Susy took things a lot better and ultimately works as a person in the middle to get the others talking again. Atsuko is still quite solid even if she did let the festival get to her during different parts of the film. Fortunately Diana was there to give a pep talk. While Diana doesn’t get as much combat here, she still shows her expertise during different parts of the film. Easily the best character like last time. As I mentioned we did get a few new kids. The main important one is Amanda who is a solid addition. While she isn’t as much of a prodigy as Diana, she has skills of her own. She actually does stick by Atsuko’s side the whole time which is great and is quick to help out in the fight with the kids. She did the best in that battle for sure.

The animation is definitely pretty sharp as with last time. I’m not sure if I’d say it’s better but it’s at least on the same level. There aren’t any real action scenes beyond the climax, but the energy effects still look good. There’s still not much of a soundtrack. I don’t know how long the gap was between this film and the first, but it does a good job of feeling like it took place pretty quickly afterwards. If you watch both films back to back they look almost identical which was probably nostalgic depending on how much later it was.

Like with the first film, the real strength here is in how likable the characters are and the fun setting. There’s a reason why school films and shows are so popular. It’s just a fun setting for the characters to interact and to quickly throw in a lot of fun scenarios. Something as simple as planning out a parade can easily be a full movie plot whether or not the main characters have super powers or not. At this point it’s hard to tell exactly what kind of movie series this is trying to be. A school days type plot or more of a fantasy adventure. Perhaps it will change from adventure to adventure but so long as the writing stays strong I don’t imagine it will falter at all.

Overall, The Enchanted Parade is a good follow-up to the original. It’s nice to have a feature length film for the gang. In order to get that film experience the film added more characters and a longer plot, but I don’t think all of it was necessary. Cutting out the kids would have gone a good way, but I think it would have been even cooler if the film had higher stakes like the original one. Having the witches go on a field trip somewhere would be a pretty cool plot. Regardless, I’d recommend checking this one out. If you have to choose a side, I recommend picking team Witch.