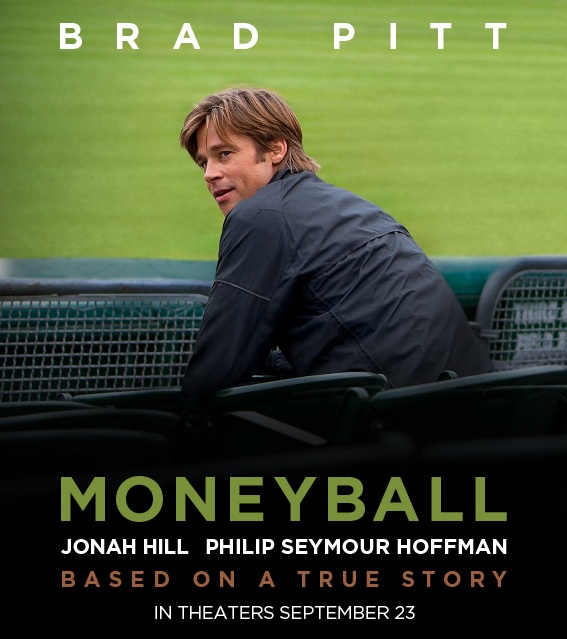 It’s time to look at a film based on true events. I’m not all that knowledgeable on Baseball so even once they mentioned the team and the year I didn’t know what was going to happen ahead of time. In a way that helps to make the film more interesting. You know that the year had to be special in some way or there wouldn’t be a film, but the question was whether or not they would win the World Series. Big Baseball fans will know the answer to that right away, but whether you do know or not, this film’s pretty enjoyable.

The film follows general manager Billy Beane as he is faced with a tough dilemma. His team lost in the playoffs last year and now all of their best players have been swiped by other teams. This team also doesn’t have a lot of money so it’s not like they can just go and buy some good players. Billy is confident that if they try drafting people the normal way they are going to lose. Following this train of logic be brings in an assistant from another team known as Peter. Peter believes that there is a data way to picking out good players rather than simply looking for talent. He builds the algorithm and then the main characters start drafting from there. Still, just because the team is good on paper doesn’t mean that it will necessarily work. Also, while it will be tough enough to meet the opposition from other teams, there are forces within the organization who don’t like what is going on.

Another interesting dynamic here is the fact that Billy isn’t the owner or the coach, he’s the GM. It’s an interesting position as it’s a very powerful one, but not a position that comes up in the news much. Beyond Jerry Jones I couldn’t name any other GM in all of sports. So for the film the tough part is that Billy can make all the trades he wants, but if the coach doesn’t play them then he is stuck. He can’t really fire the coach because of the contract. I’m sure he could ask the owner to buy the coach out, but considering how the owner doesn’t want to spend any money that definitely seems pretty unlikely. The players also comment on how it’s rare to be talking to a GM, but Billy makes sure to take a hands on approach with the team. He even acts like the coach for a good chunk of the film.

Billy’s a fun lead. It was definitely interesting how he said he doesn’t watch the games though. I personally find Baseball to be a little boring with how long the season is and the slow pace of the games, but if you’re a GM I just assume that you like the game or at least that you like the salary enough to like the game. At least he is pretty upfront about this with Peter though and by the end he watches more though. By the end of the film he has a tough coaching decision. I definitely agree with Peter on going up to show how the system works and not letting it get too personal. Billy ultimately makes the move he was most comfortable with which based on his backstory makes sense. Definitely feels like a missed opportunity though.

Peter is a pretty good supporting character. He doesn’t quite have the confidence or know how that Billy has, but in the guy’s defense he had only just started his first job when he was pushed all the way up the ladder. It makes sense that he wouldn’t really be too comfortable with these more difficult tasks like staying on the line with multiple clients or firing people. Billy shows up the ropes though and by the end he is definitely pretty good in these various roles.

A film like this is naturally counting on the writing to be a success. The sport scenes are definitely important of course, but without a good script it’ll fall flat. I’d definitely say that it was pretty solid. Perhaps not perfect, but it was engaging and you’ll be interested in what is going to happen from start to finish. The on the field action is naturally pretty cool since it’s like a sped up version of the game as the movie doesn’t have to wait between hits, but the off the field parts are nice too. You definitely do get the feeling that the owner was trying to save up as much money as possible as the players are even charged for soda. That does sound pretty crazy so it’s no wonder why the team always loses. Even if Billy does give it a good system, I can see the owner messing it up by never giving anyone a pay increase. Eventually even if you use the data model you’re gonna have to pay some of the players.

Overall, Moneyball is definitely a really good film. I do think basically any sport can be interesting in cinema form as there was even that Golf film I saw a while back that was pretty fun. Baseball is no exception and this one was really well made. I think you’ll be able to enjoy it whether you follow the sport or you do not. Think of it more as a drama title and you’ll be engaged. I feel like a lot of films based on true stories tend to be more about traumatic experiences or really big events. In comparison this one was a lot smaller so it was cool that it got picked to be adapted. I’d definitely be down for more sport movies to come out someday.