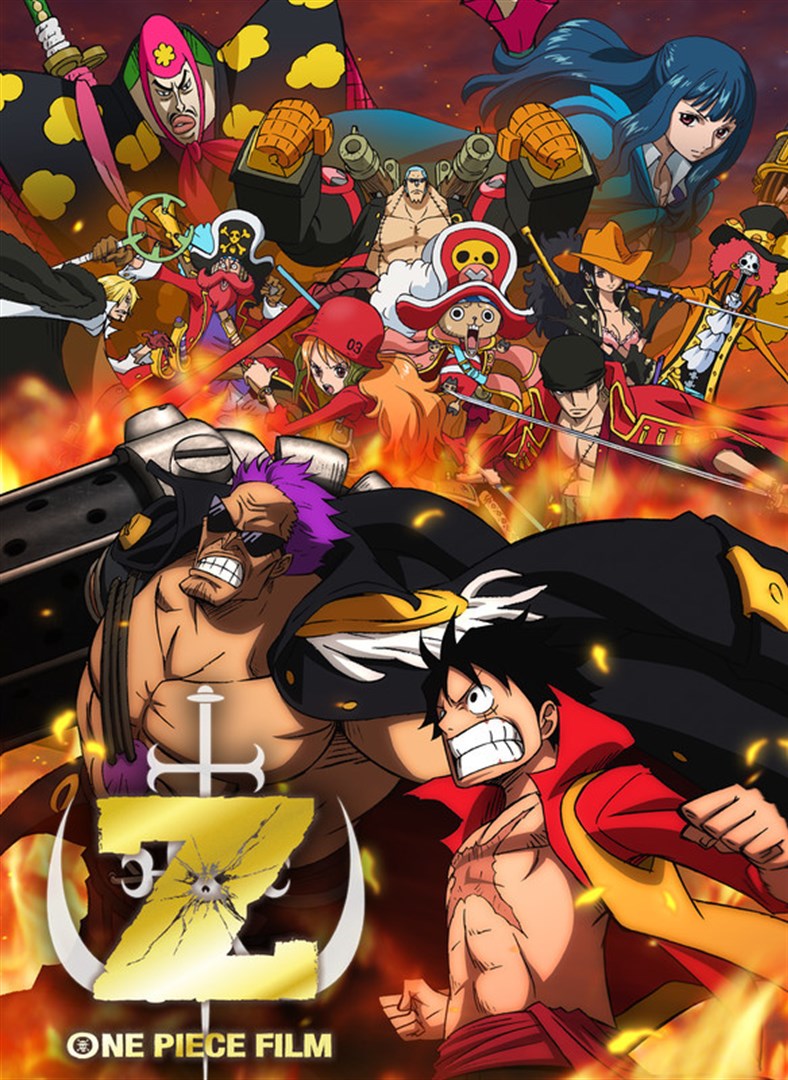 It’s time to look at the most well known One Piece film out there. Film Z always got a ton of hype due to the fact that it had the DBZ type battles. I was certainly eager to check this one out and it turned out to be a lot of fun as expected. I would even give it the slight edge over Stampede. Mainly my only issue with that one was since it was all of the hype characters fighting each other almost none of the battles even had an ending. Here there is a winner or loser in each match which I think was important. It’s always good to finish things and the battles are a blast. More on that in a minute but this is definitely a film you should check out.

The movie starts by introducing us to Z. He is attacking a large island and Kiazaru shows up to try and stop him. It’s a pretty good fight but Z manages to blow up the island anyway. We then fast forward to where Luffy and friends are sailing as normal. They help Z out of the water and nurse him back to health but since they are pirates and his mission is to destroy them all, he ends up attacking and easily defeats the Strawhats. The team will now have to try and mount a comeback tour. Can Luffy really defeat this immensely powerful Z character?

Right away the first scene of the film started things off on a high note. The battle with Z vs the Marines are definitely solid. Kizaru has always been pretty much untouchable in the One Piece series so it was nice to see someone make him sweat a bit. That said, Kizaru was definitely going to win that round if it had kept going. As strong as Z is, he’s just not ready to take down Kizaru. Part of the issue here is that Kizaru’s ability to turn into light itself makes him extremely fast and also extremely hard to injure. How can you stop a guy who can just zip away at light speed? Z’s sea prism arm helps to negate that but at the same time he isn’t fast enough to actually grab Kizaru so at most it just helps him bypass the light and actually deal some damage at ties. Every step counts though so I suppose we take those.

There are a lot of action scenes throughout and they’re all quite solid. One of the best fights is definitely the opening skirmish with Z. It’s always fun to see the Strawhats actually team up against an opponent. It feels like they haven’t actually done that since Aokiji so it was nice to see here. I like to think that the big 3 should have done a little better against Z but as they said later on, their guards were down at the time. The film also uses a lot of 3D views during the fight which is nice. They tend to work pretty well for stylizing the fights. RWBY’s been adding some more of that in lately as well. It helps you really see the full attacks which works out quite nicely. The battles here definitely aren’t playing around and the animation is great as you would expect.

Then we’ve got the soundtrack which is solid although I don’t care for the pirate’s song. It plays near the beginning and near the end of the film but both times I didn’t really feel like it meshed all that well with what was going on. I dunno, it just had no real energy or life to it. You can do soft songs that are still pretty epic but this was not one of them. Beyond that, the rest of the songs were pretty solid though which is good. One Piece is all about being high energy so we wouldn’t want to lose that.

Film: Z goes by very quickly so the pacing is solid. There are a lot of action scenes but there’s also a lot of downtime so fortunately those scenes work out well enough. The writing is on point and this feels like a classic One Piece adventure. My only real fault with the film is that it can definitely be a bit obnoxious with the fanservice for Nami and Robin. Fortunately Nami gets taken out of the picture for a while since she gets turned into a kid but before that the film really seems to make fanservice her main role. It’s nothing crazy compared to other films and shows, but it’s definitely there and quite direct about it.

As for the new characters, there were really 3 main ones. The first is Z and he makes for a solid villain. He’s had enough of pirates messing up the world so why not just end everything right? If he destroys the new World then that’s it. I do question how he believes this would destroy all pirates though. The only way is if the entire planet does literally blow up which seems like a possibility I guess but at the same time they seem to act like it’ll destroy a lot of people but not everyone. No matter how you slice it, the pirates would be the last survivors if anyone was to live so the humans would need to watch out. Some Devil Fruit Users can fly as well so a flood wouldn’t be the end. It would be time to fly up to Skypiea.

Z’s motive here is really about revenge so it’s a compelling mission. He’s certainly made a lot of sacrifices to get to this point. He’s also quite determined in his goal to take out the pirates and doesn’t waver. From all of the big film antagonists he would have to be the best one so far. Then you have his right hand lady Ain. Her ability to de age a person by 10 years every time she makes contact with them is quite impressive. It’s definitely a very useful ability that won’t steer you wrong. How do you hope to fight an ability like that right? Her battles with Zoro were quite impressive and her ability has to be one of the most dangerous ones in the series. Especially if she hides the true effect until it’s too late.

Then you have Binz who is just as loyal as Ain but doesn’t stand out as much. His ability is that he can dance to summon up plants. It’s a pretty useful ability for sure, but not nearly as flashy. I would also make the case that he should have lost a lot sooner but at least his speed does help to compensate for his ability not being very offensive in nature. His battle with Sanji is also pretty solid. As for the main cast, they’re all pretty true to form. Luffy, Zoro, and Sanji are still the heavy hitters here dealing with the enemies. Usopp and Brook can never focus long enough to actually be of help and just limit the crew for the most part. Nami and Robin get the job done when they appear even though they aren’t core fighters. The group is pretty big at this point so it’s always hard to find a villain group big enough to deal with all of them.

One last thing I have to mention though is that the government’s plan was pretty terrible here. So, from their point of view if Z destroys all 4 end points then the world might end. After he destroys two of them they have a big meeting about protecting the last 2 points with every available marine. So they should be around for the final 2 islands right? Wrong! On the final islands they’re basically just messing around the whole time and show up too late. They have some flunkies protecting the points but that’s it. Shouldn’t they have had the Admirals there or something? If Luffy hadn’t shown up then all 4 islands would have been destroyed for sure and the Marines wouldn’t have done a single thing. So no matter how you slice it, they failed here and owe their lives to a pirate. I don’t know what they were thinking.

Overall, One Piece Film: Z is a pretty fun ride. There was a good amount of detail put into the villains here so you should remember them. The story is strong and it’s always nice to see someone giving Luffy a good fight. It may be a little unsatisfying to some that Luffy doesn’t put up a bit of a better fight here but Z’s not someone you can really mess with. Zoro and Sanji put their opponents down pretty quick though so at least they brought their A game. If you like action films or just want a good adventure then this is definitely a solid film to check out. The One Piece films always do a good job of making sure you can understand what is going on whether you’ve already seen the series or not. Of course, you’ll understand the cameos and easter eggs more if you’re a fan of the series.