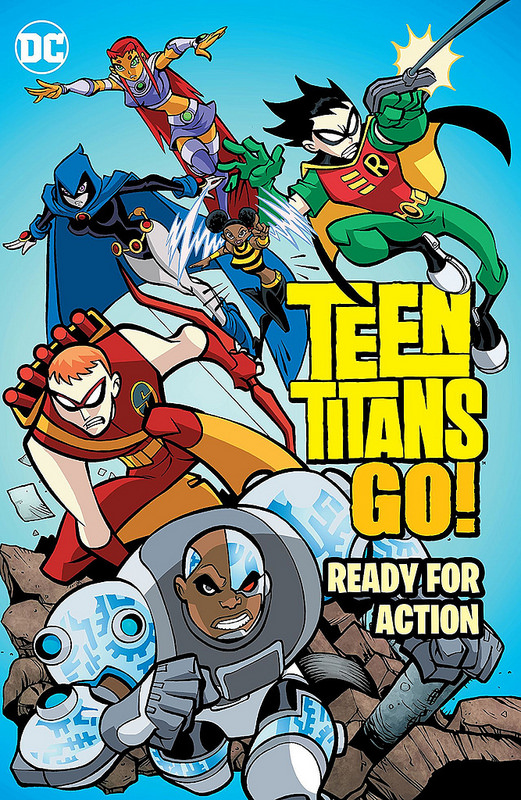 Time for a Teen Titans Go collection! Of course, I’m not talking about the current flash animated show, but the original Teen Titans Go adventures. It’s basically the classic TV show team with the original designs so you can’t go wrong there. The art can be a little sketchy at times, but it’s definitely a pretty fun collection. We get quite a few stories and always some action around. As always, Robin also manages to steal the show.

The first comic deals with a bunch of zombies attacking. They seem to attack every place where a musician takes the stage so that seems awfully suspicious. The Titans head over there while Raven goes to fight the mastermind directly. He seems to have manipulation over the shadows so he is someone that you definitely have to be careful with. Of course, Raven has a lot of experience in this field herself so she’s certainly not worried. A pretty good start to the collection. It may not have had a lot of action, but I liked the mastermind who was in the shadows. Raven taking care of him with minimal difficulty definitely makes sense since there is no way this guy should pose much of a threat to her. Raven is simply on another level when it comes to powers from the shadows.

The next comic had Raven fall inside the video game world when Atlas made his big return. Cyborg has apparently been hiding from him for a while, but you can’t escape Wifi and lag switches. A lot of technical glitches occur which is why people keep falling into the game. Can the Titans clear the game and get out or will a cop out occur? Unfortunately it’s the latter, but it’s still a fun issue. The original Atlas episode is actually one of the most underrated ones in the series if you ask me and I thought it was pretty good. I would have liked for Atlas to have actually fought here. So it’s not as good as the first story, but still solid.

Next up is the Beast Boy adventure. He gets turned into a Godzilla homage so the Teen Titans have to team up with the East branch to bring him down. They take out the Voltron robot that Cyborg had been saving and manage to really knock the fight out of Beast Boy. Who doesn’t like a giant monster comic right? I prefer humanoid opponents, but it’s hard to say no to a Godzilla homage. At the very least it was also fun seeing the East squad again. Speedy and Robin had a nice team up as well.

Things changed a bit with the next comic as it was actually two mini stories. The first story is about Raven lending all of the Titans her super spooky book except for Beast Boy since she figured he couldn’t handle it. He’s not mature enough. He decides to prove her point by breaking into her room and stealing her book. It’s the wrong one though so he unleashes a monster to the world. Pretty decent comic and I’m glad we got the moral at the end that Beast Boy isn’t ready for it. The second half story was a lot better though as Robin faces off against Slade and they have an epic battle until Starfire wakes Robin up from his day dream. Hey, it might not have been real but it makes for a fun adventure. The art got very water colored for some reason for this issue. I’m not really a fan of that style, I’ll take the classic look.

The next two comics are definitely the best in the volume. First off is the return of Red X. He’s here with a vengeance as he starts committing a lot of crimes. The strange thing is that when the Titans try to stop him, he seems to be in 5 places at once. Most of them are robots but is the real one the real Red X? He’s never used such a tactic before. The Titans assemble and get ready to take him down. It’s a pretty action packed comic with Robin as the focus, how could this not win? Robin is also the only member to do well against his Red X counterpart which is worth mentioning. Yeah, all told, I was pretty satisfied with how the comic went. Even the art seemed to be at its peak here.

Next up was a sequel to the Master of Games story. The Titans are taking down crooks as per usual when a red gem shatters and they all switch powers. Robin gets Starfire’s abilities while Raven gets Robin’s hand to hand skills for example. It’s a pretty interesting development and as expected, Robin and Raven handle the changes the best. The others have a pretty tough time of it but they’ll have to stay strong since crime never takes a holiday. It’s not a super action packed episode or anything, but swapping powers can always be an amusing plot line for an episode. This one handled it pretty well at that.

Finally, we end off with a Christmas episode. The team has to deal with the Multiple Man. (I’m not positive if that’s his name, but it would make sense) He’s ruining Christmas for everyone. Robin manages to stop him with a good trick, but Beast Boy is sad because Robin has to give his present to a random guy whose present was ruined. The secret santa may not have worked out for everyone, but it’s the thought that counts. It’s a pretty happy comic that is fitting for a Christmas story and it’s a reasonable way to end the collection. It captures the spirit of the TV show as an action packed adventure that had a good amount of humor.

It’s always nostalgic seeing the old cast. The Titans Go series was definitely a blast so it’ll be cool seeing the other issues at some point. The art could use a bit of a tune up at times, but I like the overall color scheme and character designs. The author just has trouble with the faces from time to time. Either way it is certainly a style that is easy to read and stands out though so I’d call that a win in my book.

Overall, You should definitely check this comic out. Think of the issues as the lost episodes that you never got to see when you were a kid. Hopefully the series got quite a few more volumes before ending. The array of stories is pretty solid and it felt like a good amount of content was squeezed into the volume. In these troubled times of Chibi Teen Titans Go episodes, it’s always helpful to remember the original. Perhaps these stories will be adapted into a one season sequel show someday. You never know…it could happen.