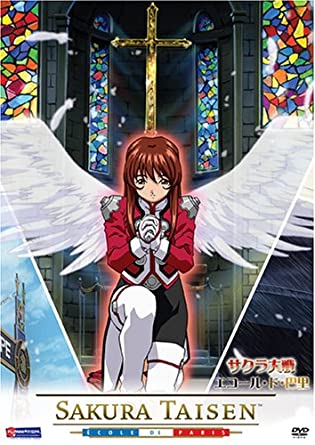 The Sakura Wars marathon continues as we now focus completely on the France division. Aside from Ogami that means it’s time for a completely new team to shake things up. The OVA has 3 episodes so it’s definitely a pretty quick experience but that’s enough time to get all of the characters introduced. It looks like the team will have a fun dynamic. I certainly wouldn’t put these guys above the original Flower Division or the hype New York Branch quite yet but it’s definitely early as I’ve been with those guys for many hours while this group only about an hour so far.

The first episode focuses on Erica and Glycine meeting up for the first time. Glycine has royal heritage from her Viking ancestors so she believes in always holding her ground and behaving in a prim and proper fashion. Meanwhile Erica is more of a spacey person who gets distracted easily. She is a little more capable than she lets on though as Erica is actually a member of the Paris division. A group of secret fighters who protect the country from alien monsters who would attack it. Unlike Japan, Paris isn’t attacked very often but the government wants to be ready as they fear the attacks will soon increase in intensity. It’s why they are looking to bring Ogami in but at the moment their group is pretty small. In fact, Erica may have been the only member.

It’s a pretty fun way to start the OVA. Erica is a fun enough lead and her banter with Glycine is good. We also get a solid action scene in the museum which gets pretty intense. The monster was actually giving them a pretty good fight here. It’s why I always advise not having a gun as your main weapon because it will always be limited in how much damage the bullets can deal unless you are somehow able to augment their abilities. Otherwise you’re just not going to win the big battles. Fortunately for Erica, Glycine was able to use her super strength to turn the tides.

The second episode is more of an elaborate chase. So there is a villain known as Lobelia who seems to have the same spirit energy as the main heroines. Unfortunately she uses it for evil though as she is a burglar although the government says she performs just about every kind of crime. They’ve decided to take her down alive so they can force her to join the other heroes. It won’t be easy though so the two political leaders decide to have a chess match while waiting. The episode has a lot of subtext going on here as the chess battle mimics the actual events. It’s also pretty interesting to see onw of the future Sakura War members actually be a villain. She may be forced into helping them out but it doesn’t mean that she’s happy about it.

While not as solid as the first episode this is still a pretty reasonable follow up. I always like being able to see the actual powers on display since that gets a lot more focus in the game than in the actual OVAs and shows. Lobelia’s abilities are definitely the real deal with her master over fire. It’s pretty impressive how long she is able to elude the heroes and even to the end her reaction times served her well. I may not really be a fan of the character but she would definitely add quite a lot to the overall dynamic.

Then we’ve got the final episode which probably does end up having the most action. So the team is finally all united with the various members. Ogami is running them through a typical practice session when the robot ends up being corrupted by the clown villain. The Team has to then try and team up to take it down but this robot’s actually pretty tough and most of the members don’t have their robots ready. As a result it’s really Erica and Ogami doing their best to take it down. The fight switches between hand drawn and CGI a lot which makes for a pretty interesting action sequence. You definitely couldn’t have ended with a more fitting episode. You’ve now got the team assembled and also got to see what they’ve got against a true villain even if most of them were caught resting on their laurels here.

With only 3 episodes not all of the characters get a lot of development quite yet though. Coquelicot for example joined the group later on but doesn’t have much to do yet. We know that she likes animals but haven’t gotten to see much more than that. I can only assume that she is able to fight pretty well with the spirit power but we’ll have to wait and see that. Then you’ve got Hanabi who seems rather timid and trying to get over a recent death. She’s very polite and seems like a pretty kind hearted soul who’s a little in over her head. She doesn’t get a focus yet either.

Mainly the OVA is trying to give the screen time to the main 3 plus Ogami. Ogami definitely looks pretty good here even if it does seem like he’s not ready to handle this group yet. They’ve already started driving him crazy and he’s brand new there. I can only imagine how it’ll be for him soon. He probably just misses the gang but maybe he’ll warm up to these guys soon. In the meantime his sword skills are as good as ever.

As mentioned, Erica is a fun enough lead. She can maybe be a bit too oblivious at times and doesn’t have her priorities straight at times but at least she is good when it comes time to fight. She’s definitely experienced there. Glycine was definitely my favorite character here. I like her confidence and she was ready to jump right into the action when needed. She also doesn’t put up with Lobelia’s attitude the way the rest of the characters do. One thing she definitely does not tolerate is disrespect.

As for Lobelia, I do typically like when the characters show a lot of attitude and are rebellious. Lobelia fits those qualifications but at the same time her bar adventures are pretty suspect at best. She definitely goes all in on keeping her edge as she refuses to help even when her teammates are in trouble and about to be blown up. At least they definitely know where they stand with her. I imagine she’ll soften up a little more with the rest of the group eventually but for now even Sumire would have to be impressed with how antagonistic she is.

The animation is pretty solid here. You can definitely tell that it’s a bit newer than the last few. The colors are sharp and it’s all smooth. For the fight scenes it is interesting that they’re using more CGI. It’s definitely noticeable but CGI can work well. I’ll never put it quite above the classic hand drawn but it’s still good enough where I’d say the fight scene with the robots was pretty solid. It’s nice to see the mechs looking pretty fast now and having some real fight scenes here.

The OVA definitely leaves you with a good amount of questions to wonder about for the future. The villain appears briefly here as a clown but other than that we don’t really know anything about him. Most of this you’re not supposed to figure out as this is a supplementary OVA to the game as opposed to adapting the whole thing. It’s a pretty fun thing about these materials because if you own the game you can really pop these episodes in and have the complete experience. I’d definitely be down with more series doing this where you get to see the characters a little more in different scenarios.

Overall, The Paris Division is off to a pretty solid start. The Sakura Wars series is still in good hands here. The group dynamic may be a bit weaker but it’s always hard to catch up to the original bunch. I definitely hope we can have a crossover with the original cast from the Japan branch someday. After all we know without a doubt that these guys are in the same universe so I don’t think it’s too far fetched or anything like that. They just need to go ahead and do it. I think it would definitely be a pretty big hit. Hopefully we can also get more Sakura War titles licensed in the U.S. 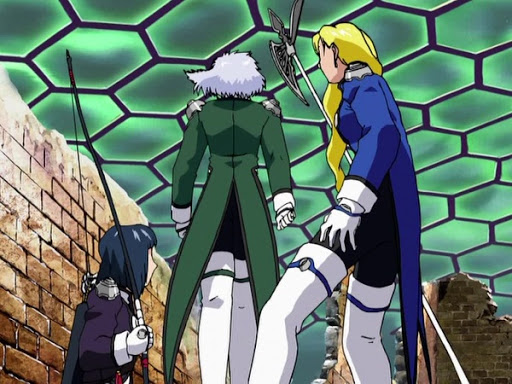