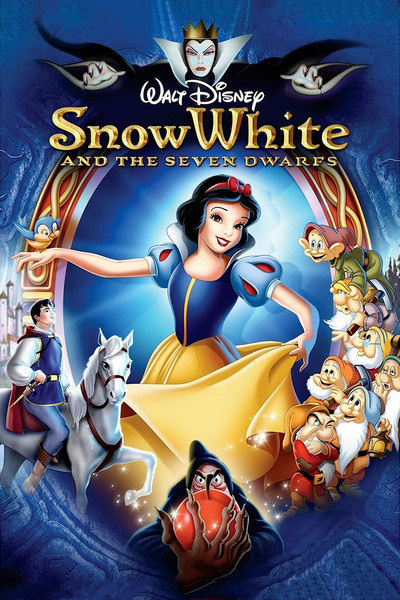 It’s time for one of Disney’s most iconic films of all time. Snow White is a tale that everyone knows about and I dare say that they are aware of the general plot as well. It’s always fun to see the original adaption because the specifics will still be different than you may recall. For example, I didn’t remember the intro being so long in this film. The actual action doesn’t start until you’ve made a lot of progress in the film already. It’s a pretty fun film. Parts of it have aged better than others, but the pacing is good and it’s over rather quickly.

The film starts off the Queen worrying about who the fairest lady in all the land could be. The mirror hints that Snow White has surpassed her so the Queen forces her to be a maid/slave. This works for a while, but Snow White’s beauty continues to level up with each passing year. The Queen hires a Huntsman to take Snow White down for the count, but he too gets captivated and warns her to escape. The Queen decides that she’ll have to get involved personally. Meanwhile, Snow White befriends a bunch of dwarves and is fairly safe in theory. What can an old queen hope to do against these powerful miners? Not much, not much at all!

Fortunately for her they are away for most of the day. The Queen isn’t one of Disney’s more interesting villains as she doesn’t actually have a lot of personality. She’s just very vain and wants to be as beautiful as she can be. She took the title by force and I wonder how many people she’d had to bump off to reach the top. I imagine it must have been a lot. Her poison apple is certainly a useful tactic even if it wouldn’t work on most main characters. If she had only brought her lightning shield with her, the ending could have been very different.

As for Snow White, she’s a nice lead I suppose. She is very naive which is a problem in these tricky times. That being said, she knows how to make a good first impression and is easy to get along with. She may have less personality than some of the other Disney princesses, but she has heart. There’s nothing wrong with her as she’s basically a perfect heroine. Of course, to be truly perfect she will need to learn how to fight. The Prince has even less personality and is basically just trying to find a princess. He comes through when it counts in the end, but it’s hard to say whether this makes him a great character or his goal just coincided with her path to being alive again.

The characters that I didn’t like are the Dwarves. Their exaggerated personalities ensure that they are all annoying, just in different ways. It’s hard to like them at all as characters and since they couldn’t even protect Snow White in the end…what was the point of them? I wouldn’t have minded if we had gotten 3 Bears instead. If you understand that reference then you’re already ahead of the curve. I think it would be hard to make them good characters due in large part to the very concept behind them. You would have to completely change the characters.

The animation is pretty good. As with just about all of Disney’s classic animations, it looks very smooth. You can see how effort was put into all of the frames and it is quite telling that it looks better than some modern shows. Th animation is bright and you can always see what is happening. The designs have become iconic over the years and I can see why since they work well. Surprisingly, I wouldn’t say that this film has an exceptional soundtrack though. None of the music/song tracks are all that memorable and I can’t say that I remember any at the moment. Perhaps I need to give it a revisit, but some films are memorable from the start. I’d use Let It Go from Frozen as an example…but I just did in this sentence.

Disney’s been remaking a bunch of their old films lately so I can definitely see this one showing up as well at some point. There would definitely need to be a bunch of changes, but that’s part of the fun with the remakes. Seeing how they modernize the story without actually changing it. For example, I doubt they’d play it straight with the poison apple since that’s basically a meme at this point. I also like to think that the Prince’s role will either be changed or he’ll have more screen time before the pivotal moment. No matter what they do though, I’m sure Disney will do the film justice. It’s the kind of film that you certainly don’t want to take lightly since it’s so well known. I’d like to see the film expand a little more on Snow White’s ability to communicate with all of the animals. After all, if Universal can create a Dark Universe and make all of their old monster films supernatural, why can’t Disney give all of its iconic princesses cool super powers? I think that would actually be pretty neat. (So long as Snow White doesn’t send the animals off into battle)

Overall, Snow White is a fun film. From the Disney Princess films, I dare say that it has the lightest plot though. At least half of the film is basically just Snow White hanging out with her animal buddies and teaching them how to keep the house neat. The evil queen doesn’t appear as much as you’d expect and the Prince’s total screen time is probably under 5 minutes. The film’s very short, which helps for pacing, but I fear that it worked against the film when it comes to the story. Everything had to be rushed through which makes the events appear to speed along. That being said, it did get legendary for a reason. It’s still solid overall and I’d recommend checking it out. After all, how can you call yourself a film fan if you haven’t watched this classic?