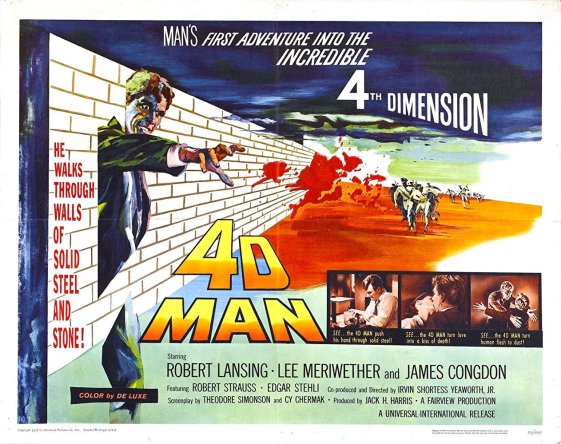 It’s time for a retro film with one of those names that will give you a lot of preconceived notions before the movie even starts. 4D Man is just a total B film name and you immediately expect a campy type of adventure. You wouldn’t really be wrong either. The film isn’t inherently campy or cheesy, but it does have a pretty crazy plot and the main villain turns evil for pretty much no reason. It’s fairly entertaining all things considered but it never does anything all that extraordinary. It’s certainly worth more of a watch than the average film of this type though.

The film starts with Tony blowing up his lab again. He does mean to do this all the time, but the experiment he is running is highly dangerous and he has yet to perfect it. This leads to a lot of bad results for him. As a result he is let go so he heads over to his brother Scott for some help. Scott offers him a job there, but Tony doesn’t want any handouts. Plus, Tony is irresistible and knows that if he sticks around then Scott’s girlfriend Linda will soon be his. It’s almost presumptuous of him, but he turns out to be correct and decides to stick around to be with Linda. Scott finds out and while he acts like he doesn’t care, he does deep down. He steals Tony’s research and completes it, turning him into the 4D Man. He can now go through things, but it costs him a lot of life points. The only way to replenish them is to murder someone by stealing their life force. Scott decides to do this and now Tony may be the only one who can stop him.

Parts of the plot can be a bit annoying though. Nothing goes right for Scott. First off, he’s being completely taken advantage of by his boss and then his girlfriend starts going with his brother instead. Scott isn’t very good at dealing with people either so he isn’t able to try to talk his way out of it. As a result, becoming a super villain was the only path that he thought he could take. It’s all pretty tragic even if Scott does go off the deep end almost right away though. After he absorbs the energy of 1-2 people by mistake he seems to start enjoying it. If he wasn’t shot at the end he likely would have kept going. Definitely a very sudden character shift if you ask me.

As for Tony, he’s not bad I suppose, but he definitely should have tried harder to stay away from Linda. She tries to go for him almost as soon as they meet which should have been a red flag from the start. Rather than beat around the bush he probably should have told Scott as well why he needed to leave. Instead neither character listens to the other and it all becomes a mess. I have to give half of the blame to Linda as well though. It’s seems to be like she was giving Scott a lot of signals before Tony showed up. Maybe she didn’t and it was all in his head, but from what we saw it seemed like that was the case. Moving on so quickly definitely wasn’t a great move. She did good in the climax though as she actively defended herself. That’s more than what most heroines did back in the day. (Linda did faint in another scene so this was a good way of making a comeback)

The film pretty much plays it by the numbers as it goes on. The writing is solid and the premise was interesting to it manages to coast by. Having one character work on a material that is unbreakable while the other tries to get matter to go through things is interesting. I don’t think we needed to add in the other jealous co-worker though. His plot ultimately doesn’t really have time to go anywhere and feels like a dead end by the time the film ends. Maybe he was just there to give a reason as to why the boss would have Tony’s idea with him which adds to the climax. Still, it would have been easy to have the scene anyway since Scott had a bone to pick with him from the start.

I don’t think the cops handled the climax well though. Sure, they surrounded Scott, but they knew about his powers so why would the guy get so close to him? Scott’s abilities are pretty dangerous, but against a group they aren’t as potent since he needs to become tangible at some point to grab them. Instead the cops get completely outmaneuvered and it costs them dearly. Even at the end everyone runs off so Linda has to deal with the threat on her own. She handles herself well but I’d probably ditch Tony after that.

Overall, 4D Man was a decently fun film. Parts of the story do feel a little forced though like Tony agreeing to cheat with Linda on Scott or Scott turning evil. I dunno, he just didn’t seem quite crazy enough to go full psycho compared to most of the other characters. The film does hint that the actual radiation and such affected his mind a bit though. That or his mind being different from the start which triggered the transformation is to blame. Either way, I think the film could have played him up more as an anti hero than turning full mass murderer by the end. Still, I’d recommend checking this film out if you want to look at a retro thriller film. It’s like watching a villain about Shadowcat but if she was the villain. Intangibility is a simple power, but a very deadly one nonetheless.