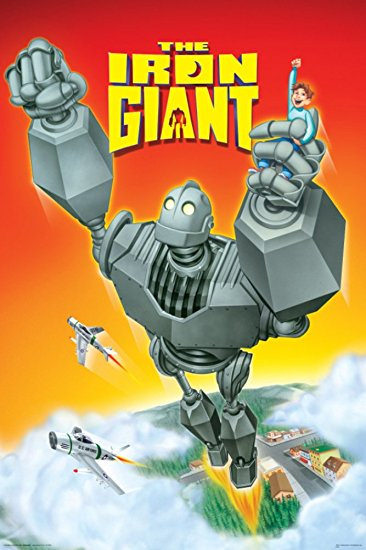 It’s time for another classic animated film. I think many of us have heard of the Iron Giant before. He got the iconic fight scene against the army and in general we don’t get too many animated films about a giant robot. At least not in America. It’s a really solid film with only one scene holding it back. The film is just a fun ride from start to finish with startlingly good animation backing it up.

The film starts out with the main character heading to the diner where his Mom works. He is trying once more for his Mom to accept the wild animal he has caught so they can all be a family. Unfortunately it escapes the cage and wrecks the cafe. As our lead is apparently known for this kind of behavior and making up stories, it doesn’t help his cred. As such, when he finds a giant robot in the forest, nobody believes him. He quickly realizes that this is a good thing though since people would probably panic and try to shoot the robot. No, he will have to be very careful about how he handles this. Unfortunately, one of the local drunks calls in the army because he thinks he saw something so they send in their best private eye. He’s got his sights set on the main character so can the boy mislead him or is the robot doomed?

Right off the bat I need to give the government agent some major credit. He’s one of the best antagonists I’ve seen in a Western animated film and any scene with him is a guaranteed hit. “Big things happen in big places.” is probably the best line in the whole film. Still, he quickly finds out that there really might be something to this little town and decides to get to the bottom of it. His detective skills aren’t bad and the sad part is that he probably is the government’s best agent so it’s a shame that he isn’t heroic. Even when his boss tells him to give up the case, he doesn’t. Mansley instead decides to get close to the kid by renting out the spare room so he can follow him around. He had a bunch of synonyms for the word “pal” as well so he never ends up having to repeat himself. Trust me, this is one character you absolutely want to have in your corner. At the end of the day, he just wants to get famous though so it’s inevitable that he wouldn’t be in your side someday.

The animation also deserves some credit for Manzley’s excellent character. The designs are really eye catching with how they pop out. Manzley’s grin is so wide that it practically stretches into the next scene and the voice completes it. As with all films, The Iron Giant is good because various aspects of it are good. Mix them all together and you have a great product on your hands. It’s yet another reminder for me that hand drawn animation will always destroy CGI. You just can’t make computer animation that is quite as expressive as what we get in this film. It’s not even that new at this point and it still really stands out.

The Iron Giant is also a reasonably good character considering that I don’t usually care for the trope too much. It’s because the film doesn’t really focus on the whole “Robot doesn’t know Earth customs so it’s funny” moments and instead focuses on how the Robot decides to be a good guy. This is where Baymax from Big Hero 6 failed. He never became a cool robot as he just stuck to the naive trope and his berserk mode wasn’t even half as cool as the Giant’s. In many respects you can say that Baymax tried to rip off the Iron Giant but simply didn’t do it all that well. This Iron Giant is a true hero. Even when the kid tries to destroy this by calling him by the name of a villainous Robot and pointing a toy gun at him, The Iron Giant doesn’t give up. Granted, the climax would have been over a lot quicker and with less drama if the Giant had remembered that he had lasers and missiles on deck but I suppose in the heat of the moment we can assume that it slipped his mind.

There is really only one bad scene in the whole film. It is unfortunately an animal violence moment as we find a dead animal in the forest. While this teaches the Giant about guns and violence the film could have gone about it in a different way if you ask me. Just have someone shoot a beer bottle and when it shatters explain the concept of breaking when it comes to humans. That would be a nice out. As I always say, there is never an excuse for animal violence. It’s a real shame but at least the film didn’t make the scene too violent or grim by having it shot or dying while they watched.

The Mom is a nice enough character. She’s definitely pretty patient with the kid considering that he seems to be well known as a troublemaker. Even her inevitable “blowup” moment is very mild compared to most films and I thought it was handled well. She has a tough personality with the outside world so nobody is going to push her around either. When the customers start to get smart she shows them the sign and can throw them out if necessary. I have to say that working at a 24 hour diner sounds rough though. Apparently she wasn’t even home for the whole night near the climax which worked out well for our esteemed government agent.

There is also the junk dealer who is a cool character. He’s quick to leap to the kid’s defense when he gets attacked or otherwise in trouble. He even defends an old man who is getting mocked by everyone. Granted, the mockers had some clever lines and had good reason not to believe the guy. This is why you shouldn’t be known as a constant drunk. It definitely hurts your credibility. When the going gets tough, this guy always manages to make the right call. He may not always be the first to help someone out if he’s not sure it’s the right move but once he is, the guy jumps into action.

The film really had a solid cast backing it up. Since the writing was also good, it definitely helped make the film complete. You know the writing is good when even the kid is bearable for the most part. He really wasn’t half bad. The kid was able to wield the gun and was fairly brave to be going out into the forest at night. He had some slip ups like letting a squirrel lose in his Mom’s cafe and pointing a gun at the Giant, but for the most part he meant well. Some annoying aspects of a kid he can’t avoid but the film does a good job of getting past that.

Overall, The Iron Giant is a great film. It’s definitely even better than I had anticipated and the movie just does a good job of being above average in all areas. The only thing that could have kept it from an 8 was the animal scene but it was just mild enough to barely not take that star away. This is one robot film that I would definitely recommend checking out. Even the ending is perfect as it could have gone one of two different ways at the very last minute and went the right way. The wrong way would have definitely ensured that it didn’t earn that extra star. Now I am ready for a sequel someday. In theory that one should definitely have a bunch of action since other robots may come as they wonder why Earth still exists. The plot would probably be rather similar to the beginning of DBZ.