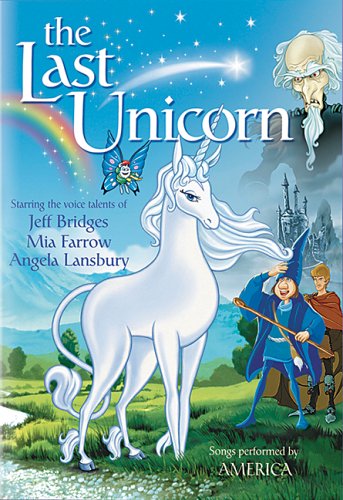 The Last Unicorn is one of those films that sounds pretty intense right off the bat. Kind of reminds me of Pryzm the Dark Unicorn although the circumstances are pretty different. This is definitely a solid film that I would recommend. In general I would say the Unicorns look pretty bad here but I suppose the villains are just that tough. It’s definitely a film that has aged pretty well with the grand songs playing and the intense action sequences. It seems like this is a pretty easy movie to miss when going through all the classics but you’ll definitely owe it to yourself to check it out.

The movie starts with a Unicorn being told that she is the last of her kind. She refuses to believe this at first. After all, how would some random people know that the rest are gone? If anything then wouldn’t they have thought there were none left until they met her? There’s a little butterfly that flies around singing vague stuff so the Unicorn decides to check for herself. Unfortunately she is kidnapped by Fortuna and forced to be in an animal circus for misfits. She is freed by Schmendrick, a magician in training. They eventually add another comrade by the name of Molly. The Unicorn finds out that all of the Unicorns have been captured by King Haggard so she decides to free them. The tough part will be that he is guarded by the Red Bull, a being so powerful that even all of the Unicorns teaming up were unable to do much against him. This Unicorn is unsure that she will do much better either.

For most of the film this character is just known as the Unicorn. She gains a name once she is in her human form but for the review I’ll just stick to “Unicorn”. Unicorn doesn’t look great I have to say and I would not consider her to be one of the best characters here. Her goal is to save the Unicorns but her resolve quickly fades when the Red Bull shows up. She does not even try to fight him and immediately runs. Before she can be destroyed she is saved by Schmendrick but otherwise she would have been doomed right from the start. Not a great showing for a being who is supposed to be so incredibly powerful. Here’s another thing to think about while you’re at it. She was kidnapped by a second rate mage almost immediately. She could not break out of her cage.

So for the whole film I couldn’t buy into the Unicorn’s hype. She’s just not that powerful and it’s easy to see how the rest of her race all lost to a single bull. Then when she is saved at the cost of her immortality she is completely ungrateful. She pouts for a long time and then ultimately forgets her goals and fades even further. Even in her final confrontation she needs quite a lot of help to really push forward. She’s definitely got a full character arc here but it doesn’t really help her all that much. I was just not really a fan of hers and I would have gained a lot more respect if she had stuck to her goal of saving the Unicorns or just put up more of a fight. She basically lost every fight she was a part of.

Schmendrick is the other big character here as he keeps on working at his craft so that he can be a very powerful mage someday. He tries pretty hard and does come through when it counts. It’s pretty rough for him though since the others are always giving him a hard time and he has to do all of the difficult jobs. He’s a nice enough guy though and a decent supporting character. Molly’s another good comrade although her role is quite a bit smaller. She mainly serves as moral support for both the Unicorn and Schmendrick. Without her both of these characters would have given up at some point.

Then you have Lir who immediately falls for Unicorn while she’s in her human form. He means well even if the whole thing seemed futile for the most part. I can’t say I was a big fan of the romance but at least for Lir it’s not like he had a big master plan otherwise. In fact if Unicorn had told him about Haggard’s evil deeds and that he was threatening her I’m sure Lir would have stepped in. His best scene was at the end of the film when he asks for Schmendrick’s help in summoning and the guy says that it’s the hero’s job to help. Rather than point out that a mere human going up against a legendary monster made of fire is crazy, Lir just sucks it up and runs into the fight. He’s promptly taken out but the guy was brave to the end and did his best to protect the Unicorn. He went right into action there.

For the villains we’ve really got two main ones aside from the monster. The first villain to show up was Fortuna whose magical abilities are impressive. She is able to make very convincing illusions and her cages were sturdy enough where these creatures couldn’t break free so that’s not bad. She definitely had a pretty gruesome end though. Then you’ve got King Haggard who’s led a pretty successful criminal empire. He seems like the kind of villain who gets a bit overconfident though. Keep in mind that he could have ended things right away and the only reason the heroes were able to infiltrate so thoroughly was because he wanted to have some fun with them. He could have ended the Unicorn at any time which is saying something. He definitely runs a tight ship otherwise and is a pretty imposing villain.

Then you’ve got Red Bull who is the big monster taking everyone out. It’s a mindless monster that just seems to go after Unicorns automatically so if you shape shift then he’ll lose interest. I do question how he took all of the Unicorns down but if they lack courage the way the main one did then I suppose it may not have been too hard. I liked the design and the sheer ferociousness of the monster. Weakness against water is rough when the villain’s castle is built with a lake on all sides but it’s not like the Bull just disintegrates immediately or anything. If there were less opponents he probably still would have been able to claim the win.

The animation here is pretty smooth. It’s got that classic hand drawn feel which I always enjoy. The colors are sharp and I’d definitely be game with the company using this over the claymation/still motion techniques of the other titles. When in doubt always go with hand drawn and you can’t go wrong. The soundtrack is also on point here. There are quite a number of songs running around. While the quality may vary the best one is easily the Last Unicorn song. It’s pretty emotional and definitely makes the adventure feel pretty grand.

Overall, I would recommend checking out The Last Unicorn. It’s a pretty interesting film with a solid plot. It’s well balanced and has good pacing and writing to match. There’s really nothing bad to say about this film. I think it would have been even better with a different lead though. The Unicorn’s supreme confidence and attitude just wasn’t earned due to how weak she looked throughout the film. She really needed to get some wins or do something in the movie to show why the Unicorns are looked up to so much. We know that she has some magic so maybe just show us some of these offensive spells. Regardless, you do get to see Lir prove himself as a loyal hero always ready to defend the kingdom and his friends from evil.