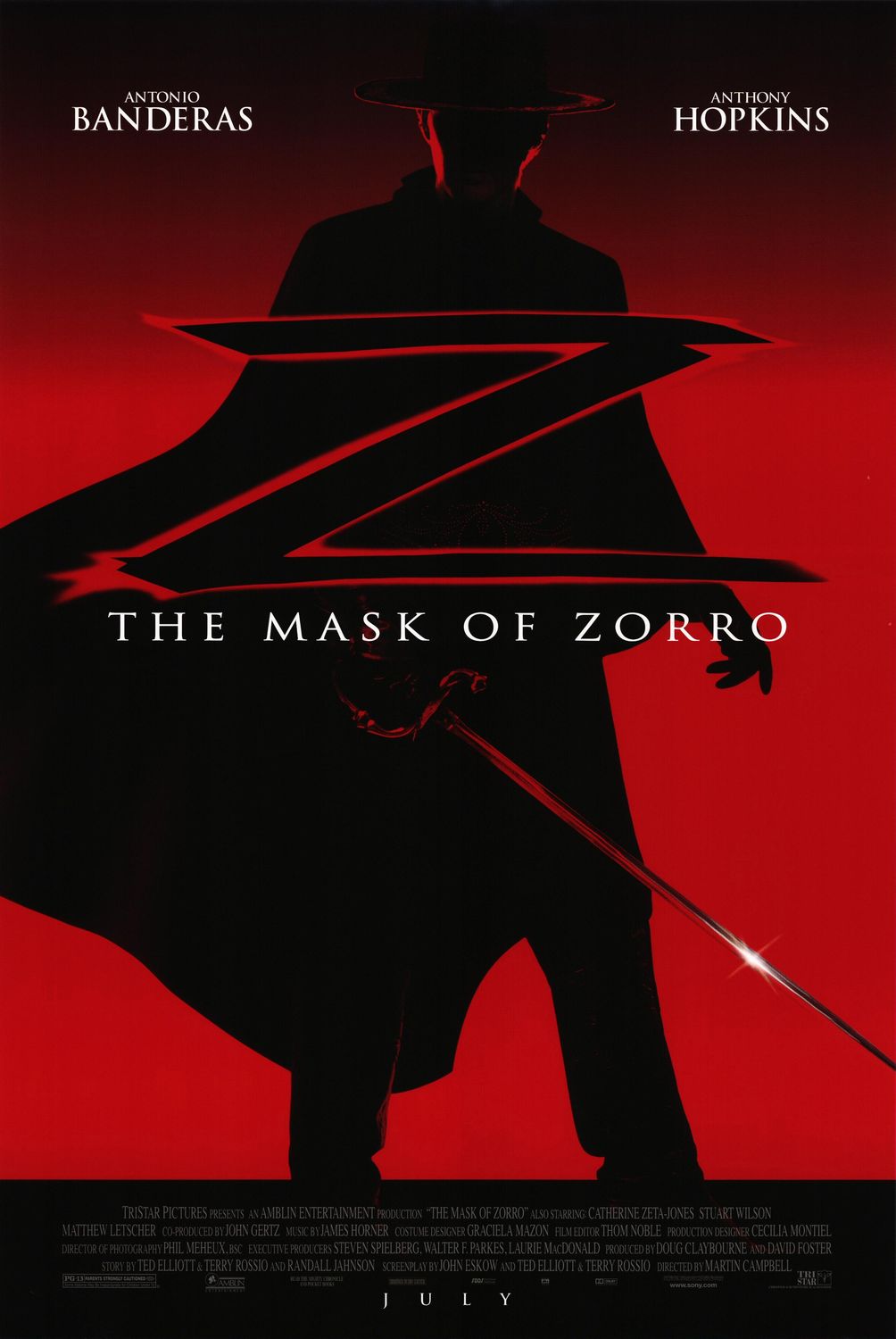 It’s time to look at a modern interpretation of a pretty old hero. I’m pretty sure just about everyone knows who Zorro is even if they haven’t actually watched a film with him. I don’t know the character too well aside from the general premise myself but he’s definitely got quite a history under his belt. The movie does a pretty good job of adapting the character. While not perfect you’ll stay entertained throughout the adventure.

The movie starts off with the best scene in the film as Zorro rescues a few people from being executed and takes on a whole army. It’s vintage Zorro as he mocks his opponents and displays his amazing fencing skills. After injuring the leader Rafael, Zorro heads home and decides to retire. His retirement is short lived as Rafael shows up and murders Zorro’s wife before imprisoning Zorro for 20 years. 20 years later Zorro is ready to get revenge but his daughter Elena has been tricked into thinking she is now Rafael’s daughter. Zorro will need to think carefully about how he get his revenge.

Meanwhile we cut to Alejandro who was one of the kids who saved Zorro’s life back in the day. He has spent the last 20 years roaming with his brother and another guy as they rob people and have a jolly old time. One day Alejandro’s two traveling companions are murdered by Harrison, a general working for Rafael. Alejandro wants revenge but he doesn’t have the skills to do so. Zorro decides to train Alejandro so that guy can become the new Zorro and deal with Harrison while Zorro gets his revenge. The two heroes prepare to attack the villains but they are heavily outnumbered. They are going to need to have a proper plan in order to win.

The film is a full 2 hours which is good because it gives us time to get introduced to the various characters. Alejandro gets a pretty good training arc as he goes from not being able to fight to being the best fighter in town. While it may seem a little fast we do get a few minor time skips so I think it took place over the course of a few months or something like that. His first outing as Zorro actually goes really well all things considered. It’s clear that he is not on the same level as the original but he can still hold his own really well.

The fight scenes are all about proper fencing and footwork which is nice to see. You don’t really see a lot of these kinds of fights anymore. It’s certainly not quite as dynamic or striking as a classic sword fight but the footwork is what makes these battles fun to watch. Fencing certainly seems pretty tricky and you have to be quite athletic to pull the fighting style off. Otherwise you are liable to get stabbed or hit with a sucker punch while fighting. A lot of the time Zorro has to fend off numerous opponents at once which is definitely not easy.

The whole chivalrous aspect of fencing can be a bit much though. There are a bunch of times when the heroes could take the win but they choose to give the villain his weapon back so they can have a proper fight. I understand not murdering the guys since they aim to be heroes, but at least disarm him and break the weapon or throw it away. By leaving the villains with their weapons it always comes back to bite the heroes. This happens quite often and so you feel like Zorro will definitely push his luck too far eventually.

Zorro makes for a good main character during the intro. I’d actually say that he’s a far better lead than Alejandro so it was too bad that we didn’t get to see him in his prime for a longer period of time. He’s a decent mentor type character as well but not quite as exciting. I still hold that the opening fight scene was the best moment in the film. Meanwhile Rafael is a solid main villain. He can actually fight really well which is definitely important and his plan is pretty solid. The guy is cunning and very good at manipulating others. He made for a very solid rival to Zorro.

Elena is a solid heroine as well. She is trying to do her best to shun her royal upbringing and defend the common people. This plot isn’t looked at all too closely so we don’t really get to see her do this but at least she is not corrupt unlike the others. Meanwhile she also knows how to fight quite well. While perhaps not on the level as Zorro she is shown to be very good. I’d like to see her fight a little more in the sequel since she has been training ever since she was a kid. The other villain in the film is Harrison. His skills are mainly with a gun although at the end he is also quite good with a rapier. Alejandro is lucky that this guy didn’t want to actually use his gun in the fight because then that would have certainly been game over for the new Zorro. Harrison was a fun villain to have around. I liked his confidence and he did seem to figure out Zorro’s identity pretty quickly.

Finally we have Alejandro who is really the main character of the film. He wants to avenge his brother but is also calm enough to accept training first. He is a good lead who is eager to learn so I can’t really fault him there. The guy means well and by the end he is instrumental in saving the day while the old Zorro was content to be on the sidelines. Alejandro just seems more heroic by the end which is a little surprising. I doubt fans of the original Zorro will be happy about that part.

The weak part of the film is unsurprisingly the romance. It’s all a bit quick and considering how many times Alejandro is forced to put Elena on the spot you can’t see why she would still want to be with him for at least a while. It’s all an act of course but it’s hard to forget being put on the spot in front of such a huge gathering. The scene of Elena fighting Zorro was also suspect. While the actual fight scene was real good Zorro definitely got a little too familiar all things considered. While she didn’t end up having a problem with it that’s another scene that is really stretching things. The film could probably have jumped up another star if we had just left the romance alone.

Overall, I enjoyed the Mask of Zorro. It’s a pretty good revenge story that doesn’t go out of its way to be too gritty. It has a lot of the classic charm you’d expect from the series while still maintaining a good amount of stakes. It’s a good blend of humor and action with the fight scenes holding up quite nicely. If you want a nice old school action film then this is a good one to check out. It hits the right notes and does a nice job of continuing the legacy of Zorro. 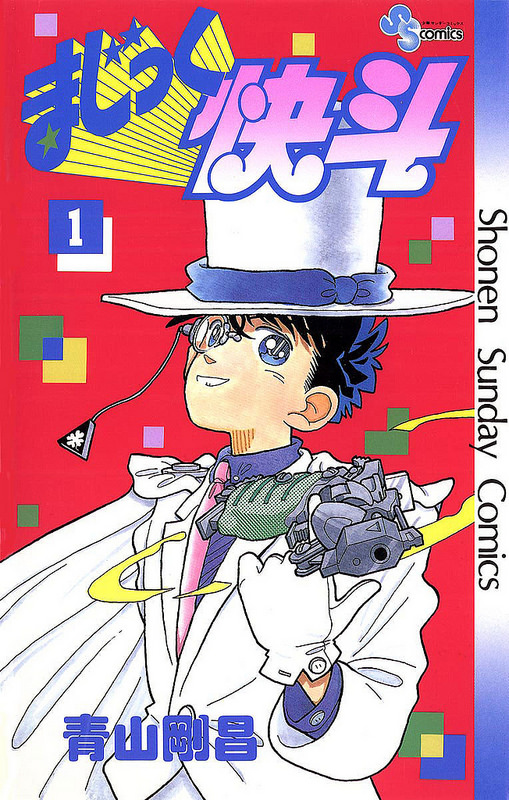 I’ve finally started the Detective Conan spinoff, Magic Kaito. This series follows the adventures of the mysterious Kaito Kid, except he isn’t as mysterious as he seems. I never cared all that much for him, but he’s actually a pretty bad character here. Still, the art is pretty solid and I’m hoping for some Conan appearances. It’s off to a decent start though and the fact that there are people here with actual powers is interesting. I’ll give it a review when the series finishes.