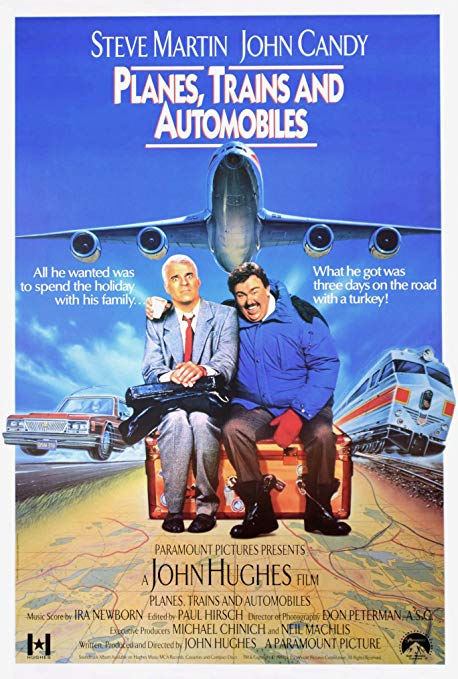 It’s time to look at a comedy film from a while back. This one’s definitely pretty well known. I didn’t know anything about the plot itself, but the title is certainly iconic. After all, why would you ever need to use all 3 methods of transportation in one day? Well, things get pretty tough for the lead. The humor is usually pretty funny with only sometimes going over the edge. That’s normal for a comedy film as no matter how hard you try it’s hard for every single joke to be funny. The goal is to at least make sure most of them land successfully.

The movie starts with Neal wrapping up a long meeting. Unfortunately the boss took forever to decide on what design he wanted to now Neal has to dash in order to catch his flight so he can spend Thanksgiving with his family. It’s not in the cards though as all planes have been delayed. He meets up with a guy named Del who says that they should team up. Neal gives that option a hard no for a while but nothing he tries is working and now it’s late. He follows Del to a hotel room the guy picked up and this would be just the start of their partnership through this crisis.

Your enjoyment of the film may depend on how much you like Del because the film could seem unfair depending on your answer to that. Without a doubt Neal is put through the wringer in this film. Del tricks Neal into spending money constantly as Neal is saddled with virtually every bill. Neal clearly makes a lot of money but that’s not the issue here. Nobody wants to have to be with a free loader the whole time and that’s exactly what Del is. He always manages to be quite slick in getting Neal to make payments so it’s hard to just overlook that. He’s costing Neal quite a lot. By the end this is all brushed to the side as we find out that Del’s a nice guy, but it just doesn’t feel even or balanced. Neal came out of this in a worse position than when he started.

Neal was also quite patient with Del before blowing up near the end. He may have gotten a bit extra at that point, but Del had really done nothing to help him prior to this. Neal also had the worst luck in the world up to this point. Even at the beginning of the film he ended up losing the cab and then Del stole the next one. It was certainly a great way to start the film though. The whole taxi chase was pretty great and Neal really put up a good fight there. He’s a consistently good character throughout the film and the only scenes where he faltered was during the car rentals. He was really picking a fight with everyone at that point so naturally he got beat up. Talk smack and get whacked after all.

As for Del, it’s hard to sympathize with him. He may be a nice guy or so he thinks but he ends up being a lot of trouble for everyone. Del has to at least be a little self aware of how much trouble he is causing everyone. There are some things he does where you just know that it can’t have been an accident. He absolutely knows what he is doing at times despite denying it. The fact of the matter is that he gets in Neal’s way throughout the movie. Neal ends up being the bigger man and is still nice to Del, but it would have been nice if Del could have contributed at least a little. By the end of the film it’ll be hard to see why they are even still friends. Del burned Neal one too many times as the movie went on.

Most of the humor in the film revolves around how crude Del is. He doesn’t have a great sense of personal hygiene and so we do get quite a bit of crude humor. Those scenes don’t tend to land quite as well as the smooth dialogue based humor. The more outrageous moments can work well too like Neal showing up for his car except that it is no longer there. Now that’s an emotional moment where you can get behind the character because he was really counting on it being in that spot so it was certainly a let down when it wasn’t there. I’m sure no matter what humor style is your favorite you will have some laughs here because there are enough laughs for everyone. The humor has a lot of variety.

When you think about it the movie’s cast was actually pretty small. Del and Neal are really the only two characters. You’ve got minor characters here and there that try to mess with the leads but that’s about it. The two are able to hold the film quite effectively though. Neal as the protagonist and Del as the antagonist. Good banter goes a long way in films and this one is an example of a successful pairing. They help the film just fly by and you can’t be an effective comedy without strong characters. Between the characters and the film’s strong writing you’ve got a successful formula.

Overall, This is a fun film. A lot of the humor is effective and Neal makes for a fun character. The movie’s plot is engaging and it is definitely an “everyone’s worst nightmare” kind of scenario as you miss the plane and get stranded with all of the hotels being booked. Honestly I would have just stayed at the hotel all night instead of going to a dicey motel. I’d take my chances with the food court and while it is hard to stay awake for so long, you can definitely pull it off for one night when the stakes are this high. If Neal had been a little more patient with this whole thing then maybe he could have spared himself a long voyage. If you haven’t watched this film yet then I’d recommend checking it out.